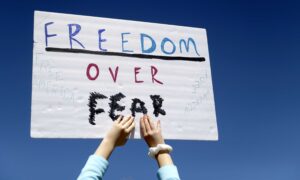 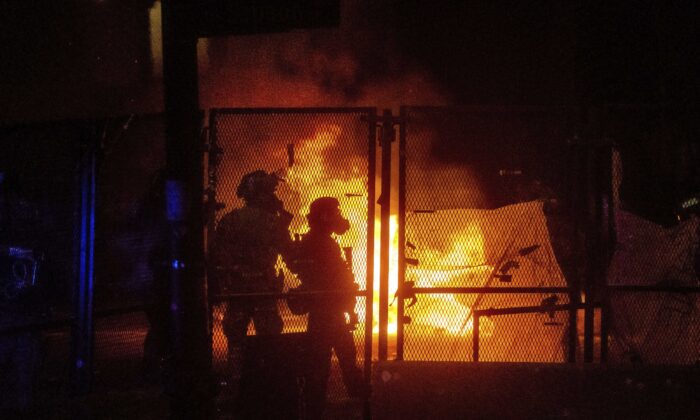 Federal officers guard the Mark O. Hatfield U.S. Courthouse as a fire lit by rioters burns on the other side of a perimeter fence, in Portland, Ore., on July 25, 2020. (Noah Berger/AP Photo)
Viewpoints

They’ve Already Come for the Jews

If you’ve spent the past two months incredulous as putative journalists stand before scenes of carnage and describe “mostly peaceful” protests, welcome to a world that Jews have been inhabiting for decades.

The progressive media’s unremitting fake news didn’t come out of nowhere. It relies on techniques developed and refined over time. And like so many of history’s defamatory campaigns, its perpetrators tested and refined their methods against the Jews. Consider some of the great milestones in fake news of the past 20 years alone:

In September 2000, Yasser Arafat unequivocally rejected a peace offer granting him everything to which the leftist “international community” claimed he was entitled. The progressive media blamed Israel. Arafat then rolled out a long-planned terror war. Fake news blamed an out-of-power Israeli politician, Ariel Sharon, for a “provocative” visit to Judaism’s holiest site. Public outcry was muted. The technique had proven itself.

Three years later, fake news covering the Bush administration’s campaign to free Iraq from Saddam’s totalitarianism followed an eerily similar path. The brutally totalitarian Saddam emerged as an innocent victim of Bush’s mad vendetta, every bit as sympathetic as the arch-terrorist Arafat. Worse, shortly after American troops deposed Saddam, CNN confessed that it had been lying to make Saddam look good for over a decade; telling the truth would have endangered its reporters. That stunning confession had no perceptible effect on CNN’s perceived credibility. Fake news was a proven winner with zero downside.

When President Barack Obama first contemplated deploying fake news as a strategy, he too rolled it out against the Jews. In mid-2009, he explained to a group of Jewish leaders that it was necessary to put some daylight between the United States and Israel, because Israel’s confidence in U.S. support made it intransigent—and harmed American interests in the Arab world. Though a complete fabrication, Obama’s spin convinced left-of-center Jewish leaders to sell his hostility toward Israel as a pro-Israel contribution to regional peace and stability.

Thus emboldened, the Obama team helped the progressive media branch its lies beyond foreign policy—where the broad public’s lack of personal exposure to the facts made it easy to sell fiction—into the domestic arena, where many in the media had long assumed that people would believe their own experiences rather than the preferred progressive narratives.

Fake news was instrumental in selling Obamacare to a skeptical nation; MIT economist Jonathan Gruber, one of its key architects, later laughed at the gullibility of an American public willing to believe the president’s intentional lies.

Fake news promulgated the mythical epidemic of racist cops oppressing black communities throughout the country, promoting riots over Trayvon Martin, in Ferguson, in Baltimore, in Charlotte, and elsewhere—and generally reversing decades of advances in the fight against racism.

Obama’s signature foreign policy item, his abysmal Iran deal, would have been dead on arrival were it not for fake news. Ben Rhodes, Obama’s Deputy National Security Adviser for Strategic Communications, later boasted of his adroit exploitation of a gullible, unethical media to create a useful echo chamber. Fake news sold the public a deal whose clear objective was strengthening Iran as a means of restraining Iran.

By the time Donald Trump announced his candidacy in June 2015, America’s progressive media had refined their methods. Rolling them out fully was easy, less expensive than actual reporting, and good for ratings. Since then, the fake news juggernaut has been relentless.

Still, it’s important to remember where each new tactic begins: as a campaign against the Jews and Israel. Fake news consistently blames Israel for getting attacked and equates Israeli defense with anti-Jewish terror. It refuses to use the historic names for Judea and Samaria, and characterizes the Jewish villagers of the historic Jewish heartland as international criminals. Violent knife-wielding Arab killers become moderates while the Jewish families they target are extremist.

When violent rioters employing regime-change tactics took to America’s streets, the fake news playbook was ready. Like the terrorists attacking Israeli schoolchildren, these anarchists and racists are aggrieved victims of a grave injustice. Like the anti-Israel parents strapping suicide vests to their own children, the anti-American rioters are “mostly peaceful.” Like the Israeli Defense Forces sacrificing its own people to minimize civilian injuries, the American police and federal troops are fascist brownshirts inattentive to due process and human rights.

Fake news has already come for the Jews. Now it’s coming for urban America. Left unchecked, it will come for you—whoever you may be.