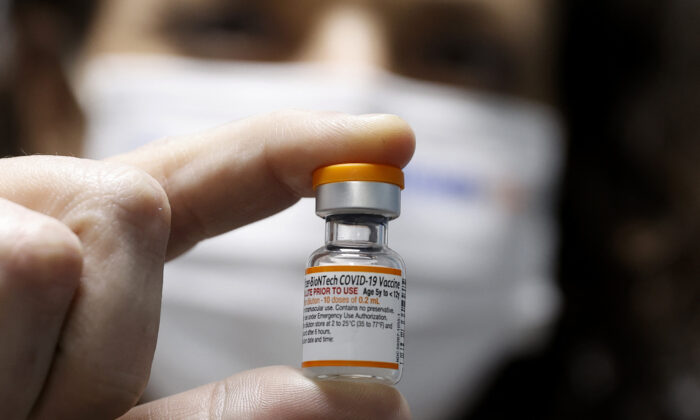 A health worker displays a vial of the Pfizer/BioNTech COVID-19 vaccine for children in Tel Aviv, Israel, on Nov. 22, 2021. (Jack Guez/AFP via Getty Images)
Viewpoints

They’re Coming for the Kids

On Nov. 19, Health Canada authorized the Pfizer COVID-19 vaccine for 5- to 11-year-olds. Its decision followed in the footsteps of the U.S. Food and Drug Administration’s emergency use authorization on Oct. 29 for the same age group. Canadian public health authorities are now ramping up clinics in and near schools. Toronto Mayor John Tory has promised selfie stations, colouring sheets, stickers, and more to help children enjoy their jabs. They’re coming for your kids.

The test of the morality of a society, said German pastor and anti-Nazi dissident Dietrich Bonhoeffer, is what it does for its children—or in this case, what it does to them. Pfizer’s trial tested the vaccine on a grand total of 3,109 children in two cohorts. The safety follow-up for the first was two and a half weeks; for the other, about three months. Traditionally, vaccines are studied for safety for several years.

The Pfizer trial was too small to establish benefits of the vaccine for the age group, and too small and short to determine the risk of adverse events. During deliberations of the FDA’s advisory panel, which voted 17-0 with one abstention to recommend authorization, one of the panel members, Dr. Eric Rubin, said, “We’re never going to know how safe the vaccine is unless we start giving it.”

Nevertheless, a recent Leger/Postmedia poll conducted in Ontario suggested that almost two-thirds of parents with young children want vaccination to be required to attend school. Province-wide school mandates have not yet been put in place, but if you belong to the remaining third of parents, there is still reason to be nervous. Not long ago, politicians and officials across the country swore blind that they would not introduce vaccine passports for anyone. Moreover, even if a provincial or local school mandate never comes, steering your children clear of the vaccine may not be as simple as withholding your consent.

In most provinces and territories, persons of any age can give their own consent to medical treatment, including children if they are mature and intelligent enough. Accordingly, earlier this year when the vaccine was approved for 12- to 17-year-olds, public health authorities insisted that teens could give consent themselves without their parents’ participation if, in the opinion of attending health-care practitioners, they were capable of doing so. Under the Ontario statute, a person is capable if they are “able to understand the information that is relevant to making a decision about the treatment … and able to appreciate the reasonably foreseeable consequences.”

In other words, the nurse with the needle can conclude that your 12-year-old can make his own decision, even if you know that he would eat ice cream for dinner and jump off the garage roof wearing homemade wings if you let him. Judgment of your child’s capacity is not yours to make. If health-care personnel make their assessments on “reasonable grounds” and in good faith, they will not be held liable for making a mistake, even though vaccination, of course, can never be reversed. Under the legislation, people are presumed to be capable. Since the medical profession appears to believe that COVID vaccination is eminently reasonable, consenting to vaccination may be interpreted as mature and sensible.

The good news is that, for now, Canadian policies appear to be different for the vaccination of 5- to 11-year-olds. In Ontario, for instance, the provincial COVID website says that parents or substitute decision-makers “for the most part” must provide consent on behalf of their child. The bad news is that requiring parental consent is not the law but merely a policy that can be disposed of whenever it gets in the way.

Children are the next frontier in the COVID campaign, and “no” is not the answer the COVID establishment wants to hear. Only the foolish or the naive still believe that health authorities act reasonably, consistently, and with common sense. Last week, Dr. Theresa Tam, Canada’s chief public officer of health, suggested that the government could start vaccinating toddlers and babies against COVID early next year.

Ultimately, neither parent nor child is guaranteed the final say. In September, a Saskatchewan court granted an order allowing a 12-year-old girl to be vaccinated against her wishes. Her father wanted her to get the shot, but her mother did not. The girl was “mature, bright, and capable” wrote Justice M.T. Megaw of the Saskatchewan Court of Queen’s Bench, but, expressing concern that the girl had been influenced by her mother, concluded that he “could not leave the decision in the hands of a 12 year old. She is, after all, a child. She is 12. She is entitled to expect the ongoing guidance of the adults in her life and she is not entitled on all matters to simply make a decision on her own.” Why not? Because the judge thought it was important to be vaccinated.

The prime directive of medicine is supposed to be “First, do no harm.” The medical establishment’s enthusiasm for administering COVID vaccines to children is bizarre. They must surely be aware that COVID does not pose material risk to healthy children, and that for the young the vaccine has not been thoroughly tested.

During COVID, children are being put at risk to make adults feel safer. A child’s life, wrote science fiction author Robert A. Heinlein, is like a piece of paper on which every person leaves a mark. He didn’t mean it quite so literally.

Keep your enemies close, and your kids closer.