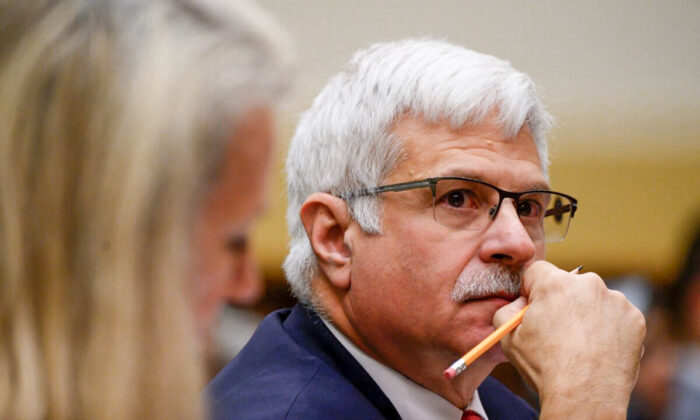 Former U.S. Assistant Secretary of State for democracy, human rights, and labor Robert Destro looks on during an Asia, the Pacific and Nonproliferation Subcommittee hearing on "Human Rights in South Asia: Views from the State Department and the Region" in Washington, on Oct. 22, 2019. (Andrew Caballero-Reynolds/AFP via Getty Images)
Religious Freedom

‘They Will Monetize Everything’: Beijing Has Turned Rights Abuses Into an Industry, Experts Say

The Chinese Communist Party has become an expert in profiting off its human rights abuses, according to a former State Department official, who pointed to the regime’s commercializing of slave labor—and even body parts from slain prisoners of conscience.

Robert Destro, a former assistant secretary of state for democracy, human rights, and labor, said that Chinese leaders will go after anything that could present a challenge to their rule.

“They are extraction experts,” Destro told an Oct. 18 panel at the Hudson Institute. “They will monetize everything, from the national resources to your liver.”

Extractive, coercive, repressive, and intrusive—these are the four words Destro used to describe the CCP.

Religion has been hit particularly hard, Destro said, pointing to the regime’s about-face on the spiritual group Falun Gong as an example.

Falun Gong, also known as Falun Dafa, is a spiritual meditation practice based on the principles of truthfulness, compassion, and tolerance.

Introduced in 1992 in the northeastern Chinese city of Changchun, Falun Gong enjoyed considerable state support in the early years as it spread rapidly by word of mouth. By official estimates, the practice had garnered more than 70 million adherents by the end of the decade. Chinese state media praised the practice for its health benefits, and a State Sports Commission official noted the billions in medical savings it brought to the state.

In 1999, then-CCP leader Jiang Zemin ordered the withdrawal of all such support, and on July 20 of that year, the CCP launched a national campaign in an effort to eliminate the practice.

“And to this day, the Falun Gong is perceived as an existential threat,” Destro said.

The adherents have been identified by experts as the primary victim group in Beijing’s industrialized forced organ harvesting campaign. Organs from imprisoned practitioners are extracted and sold, often for tens of thousands of dollars, in a macabre medical process leaving no survivors.

“[The] Chinese government have utilized the police system, judicial systems, the medical system, working together to enable this chain of profits,” said Sean Lin, communication director for Falun Dafa Association in Washington. “If they identify a match, they can go to your house to arrest you in any name and harvest your organs.”

The grisly practice of “selling the organs of its own people” makes the Chinese regime no different from “an organized criminal enterprise,” Destro said. The former official, who also previously served as a special coordinator for Tibetan issues, observed the same kind of exploitative policies being carried out on the Tibetan plateau and elsewhere in the country.

Tibet, he said, has been a “key proving ground” where the regime has carried out its repression with impunity. It’s done this by extracting the region’s minerals, forcing locals to culturally assimilate to the practices of the Han Chinese majority, driving Tibet’s spiritual leader the Dalai Lama into exile, and transforming the region into a “pervasive surveillance state.”

The region is “incredibly geostrategic and environmentally important,” being both the gateway for advancing its Belt and Road infrastructure project and a key water resource for China’s Asian neighbors. Known as the “roof of the world,” the plateau’s lofty altitude also adds to its strategic value in the regime’s bid to project military power globally.

“If you have your missiles up on the top of the plateau, you can hit anything,” he said.

Similar scenes are also unfolding in Xinjiang, the far-western region where an estimated 1 million Uyghurs are corralled in a network of internment camps, in what the authorities have billed as part of a counter-terrorism campaign.

The regime has also shown “absolutely no mercy,” said Nury Turkel, a Uyghur American lawyer and vice-chair of the U.S. Commission on International Religious Freedom.

The Xinjiang region provides 85 percent of China’s cotton and about one-fifth of the world’s supply, a major share of which is likely to be tainted by forced labor, according to the think tank Center for Global Policy.

In addition, Uyghur women in the Xinjiang camps have seen their treasured hair—grown long according to their tradition—shaved off. Some of this hair then becomes material for weaves and other beauty products sold in the United States, survivors interviewed by The Epoch Times have said.

In jails across China, toys, artificial flowers, cosmetics, and clothes are but some of the goods prisoners of conscience are forced to make during long, grueling hours each day, Falun Gong practitioners who escaped to the United States have previously told The Epoch Times.

And the implications of the regime’s human rights abuses don’t stop at China’s borders, the experts said.

With China playing a major role in global supply chains, the regime hasn’t hesitated to wield its economic power to hit back at Western criticism and bend U.S. corporations to its will. Earlier this year, Beijing led on a boycott against major international apparel brands that had sought to avoid using Xinjiang cotton in their products, causing a dozen fashion brands to lose their Chinese brand ambassadors.

Nina Shea, a religious freedom expert at the Hudson Institute who moderated the panel, noted that when the Trump administration imposed tariffs on Chinese goods, U.S.-based Bible publishers that print tens of millions of Bibles in China sided with Beijing in lobbying Washington against the measure.

“It’s an alternative model of life and existence that the Chinese self-consciously are competing with against the liberal democratic model,” she said.

“These are being pioneered on these communities,” she said. “It’s coming to a place near you if we are not alert to it.”