Video: Andy Ngo: The Overall Goal of Antifa, and Why They're Now Turning on Democrats
0
Share Now
TelegramFacebookTweetEmailTellMeWeReddit
Copy Link 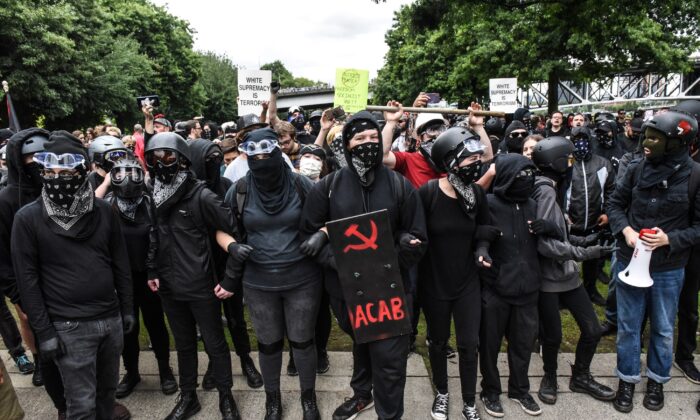 ‘They Want to Destroy the United States,’ Andy Ngo Elaborates on Antifa

Andy Ngo, journalist and author of the recently released book “Unmasked: Inside Antifa’s Radical Plan to Destroy Democracy,” told NTD that Antifa isn’t about to fade away just because former President Donald Trump has left office.

Talking about his research on the inner mechanics and goals of Antifa, Ngo said that Antifa capitalized on claims in 2016 that Trump’s term was a fascist regime, to assert that their group was all about opposing American fascism.

But “that was always just a pretext for them to cause misery and carry out homicides and attacks,” Ngo said. “Now they say that they’re just opposing America itself, because America upholds systems of fascism that is interlinked with white supremacy and racism.”

Ngo said the perception of Antifa fading away with an announcement of a Biden election victory is incorrect.

Ngo said the Democratic party isn’t as closely related to Antifa as some people think. Rather, they just had a common enemy (Trump) who allied them temporarily.

“Antifa has existed on the fringes of the far left in the United States, really, since about the ’80s,” Ngo said. But following recent events, Democrats have actually helped Antifa capture space in the mainstream left.

“Both of them were using irresponsible language and talking points about how this [the Trump administration] was ascendant American fascism, that we were on the cusp of another Holocaust.”

Ngo said the idea of opposing white supremacy and neo-Nazis gave Antifa an “opening to move in,” but according to his observations, the group’s violent attacks have been indiscriminate.

“It was becoming embedded in Portland. It was becoming routine for us to have political violence on the streets, brawls for over a number of years. And then in 2020, they exploited the death of George Floyd to carry out acts of carnage, not just in Portland but in dozens of other American cities where they literally burned down neighborhoods to the ground, destroyed numerous lives, destroyed livelihoods,” Ngo said.

The mainstream media hasn’t done a good job at explaining with exactitude what Antifa is, Ngo said, leading many to perhaps sympathize with the group that was being described as “anti-fascist protesters opposing racists and the far-right and white supremacists.”

“It sounds very noble and it makes people want to get on board with that, because that sounds entirely reasonable,” Ngo said. “But then, as I write in my book, you dive into the ideology of Antifa. And you look at the literature, you look at the thinkers that they look up to, the texts that form the basis of tenants of their ideology. You see very clearly that these are anarchists, communists.”

Read More
Nazism, Fascism, and Socialism Are All Rooted in Communism

Ngo said their “students” go through extensive ideological indoctrination, lasting months at a time, and also in their “curriculum,” they’re taught how to make homemade weapons and how to use guns.

“When they talk about wanting to burn down the system, they do mean that literally. They want to destroy the United States, and not just destroying the nation-state but actually all its founding ideals. They view, for example, property rights, and freedom of expression, and other important founding ideas that make up the American philosophy, as the actors for fascism.”

White Collar Professionals and the Vulnerable

Ngo said that from arrestee records following many months of rioting in Portland, he found that people who join Antifa belonged mostly to two groups: white collar professionals; “such as academia, journalism, some of them were attorneys,” and those who are extremely vulnerable, such as the homeless who were perhaps attracted by the food and shelter camps set up by the group.

Then these vulnerable individuals are “given riot gear and told and instructed to participate in the violence.”

“These are usually the people who are first victimized and getting arrested and all that and getting injured or getting charged,” Ngo said.

“And the people who are pulling the strings in the background, such as those who are making homemade weapons and homemade IEDs, and giving them out and passing them out to people, those people don’t get apprehended. So I have a certain amount of sympathy for the people that are victimized, because they’re pulled into this extremist ideology and used as fodder for a larger political agenda.”

Americans have to understand that Antifa has quite wide appeal among the educated, Ngo said, because “the ideological theoretical frameworks that form the basis of the ideologies are based off of historical thinkers, anarchists, and communists thinkers. And so it does appeal to those who are educated.”

“So we shouldn’t be surprised that some of the people who have been either convicted or accused of being part of Antifa violence have been academics.”