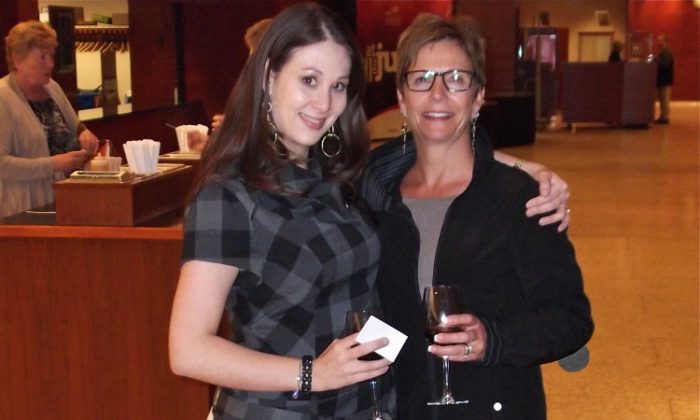 EDMONTON, Canada—Shen Yun Performing Arts concluded its Edmonton run with an evening performance to another full house at the Northern Alberta Jubilee Auditorium on Apr. 11. The audience bade the classical Chinese dance and music company farewell with a standing ovation.

Former professional dancer Nicole Zingle, who, along with her mother, was attending the show for the first time, said she didn’t know much about classical Chinese dance before seeing the performance. She said she was “pleasantly surprised” by the show.

“I like it a lot. I like the artistry behind it … I can see the dedication behind it,” she said.

Ms. Zingle has performed with a number of different ballet companies in Canada, including the National Ballet of Canada and the Royal Winnipeg Ballet.

Pointing out that she is quite critical when it comes to performing arts because of her 18-year background in classical ballet, she said she was “really enjoying” Shen Yun’s performance.

“They’ve got excellent coordination, they’re all in sync.”

She mentioned one of the pieces in which the dancers used fans in their performance as a case in point, noting how the audience could hear the fans every time the dancers performed a move with them in sync, and there “was not one single time that somebody was off.”

The choreography was also of high quality, Ms. Zingle said, noting the different formations and variations.

She also noted how the performance makes use of props, such as drums and handkerchiefs.

Ms. Zingle’s mother, Arlene McDougall, said she was amazed with the piece titled Sleeves of Silk in which female dancers use “water sleeves” in their performance. The sleeves act as extensions of the dancers’ arms, lingering in the air long after a movement is finished.

McDougall, a consultant for a land development company, also said the male performers in Shen Yun had great physical capability.

“In typical ballet, the men aren’t as flexible and strong,” she said.

“What these guys are like, their training must be incredible, because they are magnificent, the things that they do.”

According to the Shen Yun website, alongside ballet, classical Chinese dance is one of the most comprehensive dance systems in the world.

“Classical Chinese dance is composed of three main parts: bearing, form, and technical skill. Other than complete training in the fundamentals, it also entails systematic training in movements and postures, as well as very difficult jumping and tumbling techniques,” the website says.

Besides the impressive dances, Ms. Zingle said the shows is also “really colourful.”

“Lots of colours, [and] the music is great.”

Echoing her daughter’s praise of the music, played by the Shen Yun Orchestra which combines classical western and traditional Chinese instruments, Ms. McDougall said she also enjoyed the use of the animated backdrops in the show.

“I thought that was very well done,” she said.

For both the mother and daughter the happy expression of the dancers stood out, leading them to think they really enjoyed what they were performing.

“It’s all very happy, for the most part, there’s lots of smiling, their faces are alive,” Ms. Zingle said.

“I get the feeling that they’re having fun doing what they’re doing,” Ms. McDougall added.