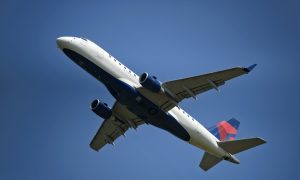 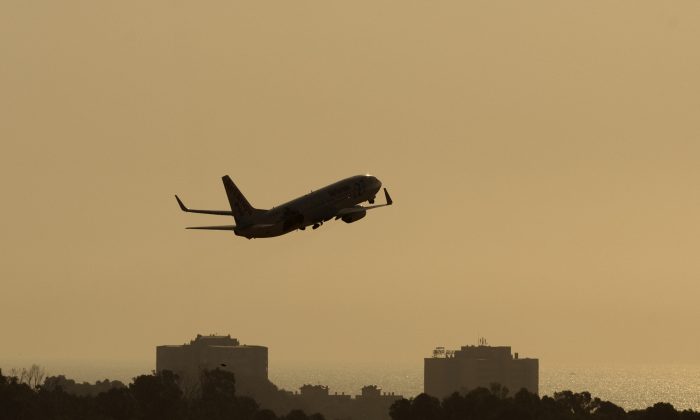 A plane takes off from Malaga's airport on Sept. 22, 2011. (Jorge Guerrero/AFP/Getty Images)
International

‘They Proved Their Compassion:’ Crew Praised for Delivering Baby Mid-flight

Crew members on a Middle East Airlines-Air Liban flight have received praise for delivering a baby mid-flight when a passenger unexpectedly went into labor, according to Lebanon’s Daily Star.

The baby girl was delivered on the Beirut-bound flight from Doha on Saturday, July 27, in what the publication described as an extraordinary event in the history of the airline.

“Announcements were made to check if there was any doctor on board to assist with the delivery, but no doctors were on board that flight,” Rima Mikaoui, director of public relations for Middle East Airlines-Air Liban, told USA Today in a statement.

Cabin crews notified the pilot, who diverted the flight to Kuwait, the Daily Star reported. The woman, said to be of Filipino nationality, gave birth while the plane was in Iraqi airspace.

The new mother and her newborn remained in Kuwait to receive medical attention, while the flight continued to Lebanon.

“Middle East Airlines-Air Liban ME435 Doha-Beirut on the 27th diverted to Kuwait after a passenger onboard gave birth to a baby girl slightly after entering the Iraqi Airspace,” the caption reads. “The professional and well trained crew delivered the women according to procedures and took good care of the baby until the plane landed.”

“Hats off to MEA’s ME435 crew for the great job they have done and for the rigorous training they receive at MEA’s training center,” the caption says.

MEA’s chairperson Mohammad Al Hout praised the crew for their actions, according to local media.

“We’re proud of the crew, their high level of training and the way they acted,” Al Hout said in a press release, cited by the publication.

“They proved their compassion, professionalism, and drive which is of utmost importance.”

The post on Lebanese Plane Spotters sparked a number of reactions.

One commenter wrote: “Job well done! Brought back so many memories,” prompting someone to ask, “You were born on a plane?”

“Nope,” the first commenter replied. “But I did deliver a baby while working for Emirates.”

Several commenters praised the person who claimed to have delivered a baby on board a plane.

“Thanks guys,” the commenter replied. “But I guess it was all part of the unseen roles of a cabin crew. The first aid training kicked in when the situation arose.  The baby I delivered on the Emirates plane was named after me. And is now 16 years old.”

Other comments included, “beautiful story with lovely outcome,” and suggestions that the infant should be called “Mea,” in tribute to Middle Eastern Airlines.

Some were more critical of the episode, asking why the mother was allowed to board the place at such a late stage in her pregnancy.

According to the UK’s National Health Service (NHS), “Most airlines will not let you fly after week 37 of pregnancy, or week 32 if you’re pregnant with twins or more babies.”

The NHS notes also that “it’s usually safe to fly while you’re pregnant and it shouldn’t harm your baby if pregnancy is straightforward.”

Several years ago, a Canadian woman gave birth over the Pacific Ocean on a Tokyo-bound flight from Calgary on Mother’s Day, without earlier realizing she was pregnant, reported Global News.

Ada Guan, 23, was 37 weeks pregnant, but boyfriend Wesley Branch told the Canadian news outlet that neither of the two had any idea Guan was pregnant.

A pregnancy test had come back negative and even a visit to the doctor failed to confirm that she was expecting.

Labor on the plane started with Guan saying she had an upset stomach.

“She told me, ‘Something fell out of me.’ I lifted up her pants and I saw a head and then I heard, ‘Wah.’

Woman gives birth on flight: ‘She told me, ‘Something fell out of me’…then I heard, ‘Wah’ http://t.co/6IBgvqt9js pic.twitter.com/rLdGTJctG1

A doctor on board Air Canada Flight 009 helped deliver the healthy baby girl.

While many women who have been through pregnancy find it hard to believe, the phenomenon of being unaware of being pregnant is surprisingly common.

It is also not uncommon for a pregnancy test to come back negative and for doctors to miss a cryptic, or stealth, pregnancy. Sometimes the mother-to-be senses she’s pregnant, but when it isn’t detected medically she’s left in a confused or distressed state. For this reason, cryptic pregnancies used to be called “denied pregnancy.”

Other recent inflight births include an incident earlier this year in which a woman went into labor on a Philippine Airlines flight to Manila, prompting an emergency landing in Hyderabad, India.