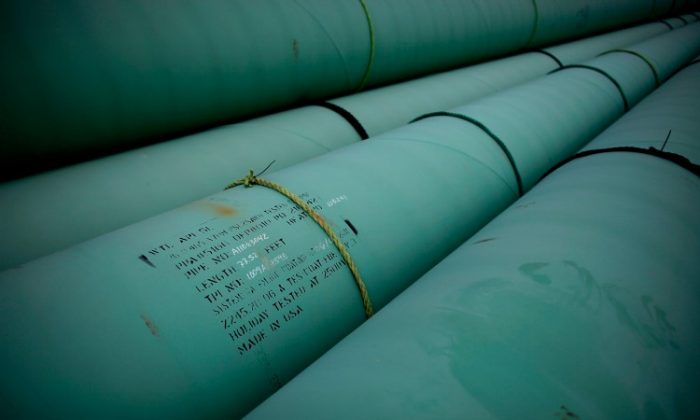 A photo shows pieces of the KeyStone XL pipeline on March 22, 2012 in Cushing, Oklahoma. (Tom Pennington/Getty Images)
US

A Texas judge ordered the builders of the Keystone XL pipeline to temporarily suspend work on private property where the project is being built.

The pipeline is designed to carry oil extracted from Canada’s oil sands—pejoratively known as “tar sands”—to the Gulf of Mexico, but the project has encountered numerous roadblocks since its proposal. It has drawn heavy fire from environmentalists, who are worried of a potential leak, and landowners alike.

Texas landowner Michael Bishop is legally fighting TransCanada, the builder of the project, because he said that the pipeline is not carrying just oil, but diluted bitumen—a thicker substance extracted from the oil sands. He filed a lawsuit in Nacogdoches County in eastern Texas, where he owns land.

Bishop claims that TransCanada misled Texans when it said that it would only transfer crude oil rather than bitumen.

“They lied to the American people,” Bishop told The Associated Press.

According to the Dallas Observer, Bishop told the newspaper weeks ago that he believes his land and the county’s land is being invaded by a Canadian corporation.

TransCanada was able to gain the ability to etch out the pipeline’s path via eminent domain, which allows a company to settle with a private landowner because it is a common oil carrier.

Bishop settled with the firm eventually, but then sued the company and the Railroad Commission of Texas, saying the two parties lied to him about the bitumen. According to The Dallas Morning News, he also owns around 20 acres of land in the small town of Douglass.

Bishop said that he was forced to settle with TransCanada because he could not afford the $10,000 lawyer fee.

Attorneys with TransCanada told the Houston Chronicle that the firm will fight the order at a hearing Thursday, Dec.13, to halt the southern leg of the 1,200-mile Keystone XL line.

Previously, TransCanada has claimed that crude extracted from oil sands is the same as other oil that flows through other pipelines across the United States. Lawyer James Freeman told the Chronicle that Bishop signed an agreement with TransCanada allowing “oil and crude petroleum products” to flow through the line and said that these products include oil sands crude.