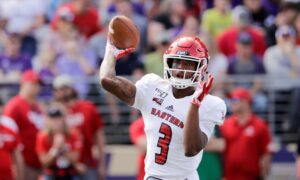 The family of a woman who died in a Nevada jail cell said guards ignored her pleas to be taken to a doctor as she suffered from drug withdrawal symptoms that ended in a fatal seizure.

A surveillance camera captured the final hours of 27-year-old Kelly Coltrain, as she convulsed repeatedly and vomited in her jail cell.

Attorney Terri Keyser-Cooper, speaking on behalf of the family, told CBS that the guards violated policy and “left her to die.”

“This is the worst example of deliberate indifference to a serious medical need that I have ever seen,” she said.

Coltrain reportedly alerted guards to the fact that she was prone to seizures while going through detox, and at one point asked to see a doctor, Keyser-Cooper said.

Within three days of her arrest for unpaid tickets and driving with a suspended license, she was dead.

Following her arrest, Coltrain could not afford to post bail and so remained in detention at the Mineral County Jail, according to the Reno Gazette-Journal.

A 300-page report by the Nevada Department of Public Safety noted that staff at the jail disobeyed department policies by not taking her to a doctor or doing regular welfare checks.

The report also states that staffers may have broken a state law against inhumane treatment of prisoners.

Coltrain had been in the cell for several days. She told her jailers that she was withdrawing from addictive drugs, and was prone to seizures while withdrawing. She refused food, and vomited repeatedly.

According to the state’s report, Deputy Ray Gulcynski told Coltrain, “Unfortunately, since you’re DT’ing (detoxifying), I’m not going to take you over to the hospital right now just to get your fix.”

“That’s not the way detention works, unfortunately. You are incarcerated with us, so … you don’t get to go to the hospital when you want. When we feel that your life is at risk… then you will go,” he said.

On July 22, 2017, according to the report, Coltrain began vomiting, trembling and “making short, convulsive type movements.”

Her jailers gave her a mop and told her to clean up her mess. She died about an hour later.

“Kelly Coltrain’s medical condition was treatable and her death preventable,” the complaint stated.

“If Ms. Coltrain had received timely and appropriate medical care, she would not have died. Kelly Coltrain suffered a protracted, extensive, painful, unnecessary death as a result of defendants’ failures,” it said.

Two officers seen in the videos were disciplined and are no longer working at the jail, CBS reported.

Mineral County Sheriff Randy Adams said he could not discuss details of an ongoing case, but that he had instituted an update of jail policy.

According to the state report, the 20-minute section of video, which included the time when Gulcynski found Coltrain unresponsive and tried to find a pulse, was removed from the video sent to the investigators.

The sheriff’s department was responsible for supplying the edited video to the state investigators.

The missing segment of video, which establishes when jail personnel first learned that Coltrain needed medical assistance, did not turn up until the civil lawsuit was filed.

The missing video was included in the evidence the state turned over to the two lawyers filing the civil suit.