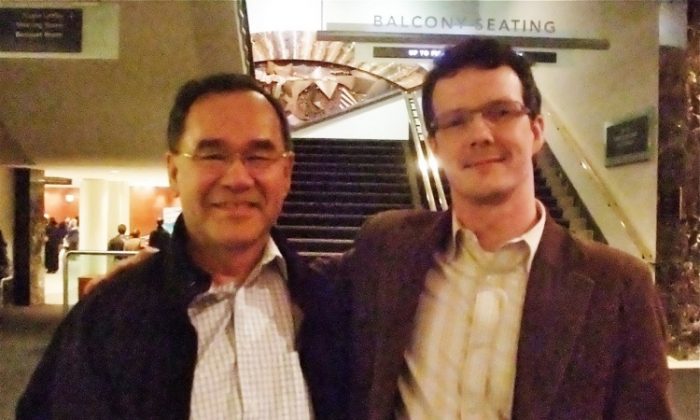 ‘They can just float across the stage,’ Says Therapist

EDMONTON, Canada—Edmonton welcomed the Shen Yun Performing Arts with open arms on Tuesday as the company performed the city’s first show of the year at the Northern Alberta Jubilee Auditorium.

Veteran Edmonton therapist Murray Armstrong attended the show with his family and called the experience “spectacular.”

“I was sitting right up front so I got to see it from really close up. It’s beautiful movement,” he said.

Mr. Armstrong, who operates his own business offering counselling services, was awed by the classical Chinese dance featured in the show.

The grace and femininity the female dancers exuded through their movement was particularly stunning, he said.

“There’s such a gracefulness that’s there all the time on stage,” he said.

“I really liked how they can just float across the stage. I really enjoyed that.”

According to the Shen Yun website, the dance company was created in New York with the mission of reviving 5,000 years of traditional Chinese culture.

Shen Yun is known for its story-based classical Chinese dance and folk dance, that spans the five millennia of Chinese history.

Music is also a keystone of the performance, which includes several operatic solos and a full orchestra featuring traditional Chinese instruments.

Mr. Armstrong enjoyed the combination of Western and Chinese instruments in the orchestra.

“I loved the instruments together,” he said.

“It was really a nice combination of the Western and Chinese.”

He was also floored by soprano Haolan Geng, who shook the walls with her rendition of a Shen Yun original composition entitled, “Speaking of Predestination,” and an encore performance of “Awakening from a Stupor.”

Steve Risselada, a local high school teacher and Mr. Armstrong’s son-in-law, was blown away by the dancer’s talent and physical capability, calling their performance “phenomenal.”