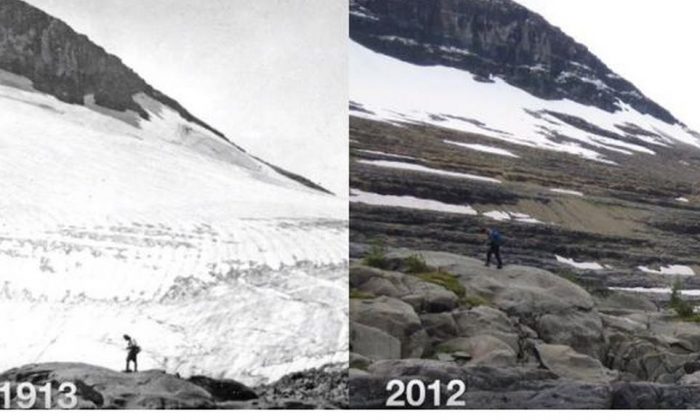 These Photos Show Extreme Melting of Glaciers in the Past Century

Between 1912 and now, glaciers at a park in Montana have dwindled dramatically. New photo evidence collected from the U.S. Geological Survey was compiled into a video, showing the change. It shows glaciers in Glacier National Parks, located in Montana. There were as many as 150 glaciers, but there’s now only 25. You can even see a change between now and only two years ago.

According to the USGS, “even though you’ve maybe never seen a glacier, they are a big item when we talk about the world’s water supply.”

“Almost 10 percent of the world’s land mass is currently covered with glaciers, mostly in places like Greenland and Antarctica. Glaciers are important features in the hydrologic cycle and affect the volume, variability, and water quality of runoff in areas where they occur,” it adds.

Glaciers store about 69 percent of the world’s freshwater, and if all land ice melted the seas would rise about 230 feet. During the last ice age, the sea level was about 400 feet lower than it is today, the agency also states.