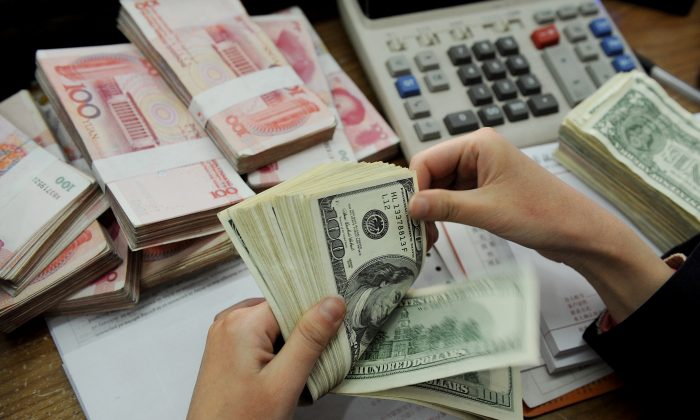 A bank teller counts stacks of US dollars and Chinese 100-yuan notes at a bank in Hefei, Anhui province, China, on Jan. 16, 2011. (STR/AFP/Getty Images)
Business

Sometimes accounting can hide an issue, sometimes it can bring problems to light. In China’s case of buying and selling U.S. Treasurys through Belgium, we can now see that capital outflows are accelerating.

With the real estate market in decline and loans for productive capacity turning sour, the only outlet left to invest in China is the soaring stock market.

And in spite of its market capitalization surpassing $10 trillion recently, the stock market is still not big enough to hold the Chinese banking system’s massive capital stock of nearly $30 trillion.

In addition, even the stock market is tied to the fortunes of the Chinese economy and to the acumen of Chinese central planners. Smart money has long tried to hedge its bets, investing in anything from African infrastructure to New York real estate.

Global Financial Integrity estimates Chinese have siphoned more than $1.25 trillion out of the country over 10 years until 2012.

That’s about $125 billion per year. Now capital outflows are estimated to have surpassed $76 billion in just the two months of March and April this year, as Chinese and Belgium Treasury holdings indicate.

China—through Belgium—sold $116 billion worth of Treasurys in April and March. China itself increased its holdings by $40 billion.

This in and of its own could just indicate China is diversifying its official foreign exchange holdings. However, as we can see from the chart above from Bloomberg, total foreign assets have dropped by more than $200 billion since June of 2014.

Although the rate of decline slowed in April, if this trend continues, we are looking at additional outflows of $304 billion for the rest of the year, well above the $125 billion annual average established until 2012.

This is also why China’s exchange rate is actually under pressure against the dollar and China is accelerating its effort to become part of the IMF’s international reserve currency before it’s too late.