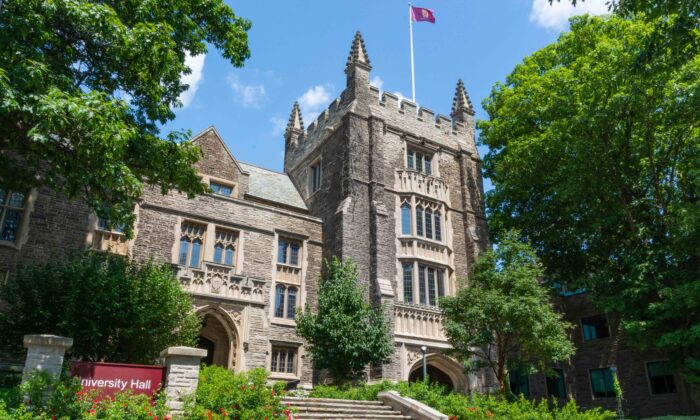 A building at McMaster University in Hamilton, Ont., in a file photo. (Alwin Lee/Shutterstock)
Canada

Cases are beginning to make their way into the courts from legal action initiated by college and university students across Canada after their schools started imposing COVID-19 policies, particularly those including mandatory vaccination.

But the court challenges just saw a setback in late April, when an Ontario court dismissed a case filed by four students at McMaster University in Hamilton after the school denied their requests for religious exemption from its vaccine mandate.

The four were among some believers in faith communities who oppose vaccines whose development involved the use of cell lines grown in a laboratory based on cells of aborted fetuses.

Their lawyer, Jorge Pineda of the Justice Centre for Constitutional Freedoms, said in an earlier interview that “the university decided that there is no connection between the vaccine and the religion, which in my view is patently false.”

Following the case’s dismissal, Pineda explained in an email that the core issue was “whether the university was correct to take the position that objections to aborted fetal cell tissue in the vaccine testing process did not have a nexus with religion.”

And because the court declined to exercise jurisdiction to rule on that core issue, he said “that issue has not been resolved.”

In its decision, the court said the case’s underlying claim is that McMaster breached Ontario’s Human Rights Code (HRC) by violating the students’ rights to be free from discrimination on the basis of “creed.” However, it said this claim “should be made to the Human Rights Tribunal of Ontario [HRTO] at first instance, not to this court.”

This dismissal followed the students’ move to amend their case by removing several of its original claims, including notably the claims that McMaster’s decision violated their rights under the Charter of Rights and Freedoms and Ontario’s HRC. This turned the case into a “narrow application for judicial review of the university’s decisions not to grant the exemption requests,” the court said, adding that abandonment of those charter and HRC claims made much of the provided evidence “irrelevant and inadmissible.”

And while it said it has jurisdiction to do a judicial review (JR) of the school’s decisions, it should decline to do so since there is another “more appropriate” process for ruling on the claim.

Pineda says that “ultimately, I think our decision to bring a JR rather than a human rights complaint served our clients well for a number of reasons, some of which I cannot disclose due to confidentiality.”

He said his clients could now appeal the court decision or pursue the case further at the HRTO. “We have yet to make a determination with our clients,” he said.

‘The Lawsuits Are Important’

Toronto Metropolitan University, formerly Ryerson University, is also facing litigation. A group of at least 17 students has retained legal counsel to contest what they say has been unjust de-enrolment because of the school’s COVID-19 Vaccination Policy.

Curtis Heinen was halfway through his four-year bachelor’s degree in urban and regional planning in October 2021 when he created ryersonaction.com, a website to recruit students like himself who could not or would not comply with the university’s approach to COVID protocol, including mandatory vaccination.

“I’m not going to disclose any status to any institution because these mandates are wrong,” Heinen told The Epoch Times. “I ended up having to live through a barrage of emails and harassment, and then ultimately a de-enrolment on Dec. 15.”

The plaintiffs, Heinen said, have a variety of reasons for being part of the litigation. From being denied exemptions, to not taking a COVID vaccine, to protecting their privacy, they have all been removed from the university enrolment list.

Like McMaster, Toronto Metropolitan suspended the vaccine mandates on May 1.

According to a statement on the Toronto Metropolitan website, the school is continuing to monitor the impact of COVID-19 and “will be nimble in responding to changes, and in planning for the future. The university may need to reinstate requirements for vaccinations and masks in indoor settings should public health indicators change.”

“That doesn’t mean they’re going to keep them lifted,” he said. “It’s a temporary suspension, so that’s why we think the lawsuits are important.”

Another student who has joined the lawsuit at Toronto Metropolitan is Alexey Makarov. He feels he has done his research both on the school’s vaccination mandate and its defence of its COVID policy. Makarov told The Epoch Times that he is eager to see the case go to court.

“For me, I objected on a statistical basis because the vaccination is arguably more dangerous and the adverse events are more dangerous than the risks of COVID itself,” he said.

“I’ll be very curious to see what the (school’s) response will be—what kind of evidence they bring to the table in terms of the whole lawsuit, because the statistics are not on their side, and the Human Rights Code is not on their side.”

At Western University in London, Ont., the stance that engineering student Harry Wade took made headlines after two of his arrests on campus went viral. Getting arrested became necessary when his conscience compelled him to be vigilant against what he saw were clear breaches of his human rights, Wade said in an interview.

But his stance forced the school to address a situation it wasn’t prepared for when he continued returning to the campus despite multiple arrests, he said.

“I decided things were going to get worse before they got better as they started rolling out the vaccine mandate,” he said. “So I said, whatever may come, I have to go back and make my stand. They brought the line closer to infringe on my freedom, so much so that it became an issue of the vaccine. So I took my small, humble, provocative step across that line.”

Still, with three civil charges for trespassing and one criminal charge for mischief, Wade said he suspects Western will force him to wait out the charges well into 2023, when his resistance will be forgotten and his only souvenir will have been a brief enrolment at the school.

“My own view is that they’re going to sit on it, because in the 18 months they have to confront it, it will expire,” he said. “So many things are going to change in that time, that none of those charges are going to matter. There might be worse charges and maybe worse news to confront, I believe, so it doesn’t really matter to them about prosecuting me. The important thing is that I stopped going to campus.”

The Epoch Times requested comment from Western but did not hear back.

‘For the Rights and Freedoms of All Canadians’

In New Westminster, B.C., business student Leo Hendriks made his first court appearance on April 26, facing charges of mischief and loitering after refusing to wear a mask at Douglas College as specified in the school’s COVID-19 Safety Plan. A dozen strangers joined him at his hearing to lend support.

Hendriks’s trial will be heard May 11. But the damage has already been done, he told The Epoch Times. The school has suspended him for a year and deregistered him past the eligibility date for tuition reimbursement. And if he wins his case, he doesn’t want to go back.

“It’s just getting more and more corrupt—both the school and the school system,” he said.

Some of his supporters spoke to The Epoch Times about their fear of how COVID restrictions have moved the country’s dividing line between personal freedom and government overreach, and how overreach would encroach further if the court cases side with the schools.

Jasmine Piao, having recently completed university herself, managed to skirt most of the mandates she opposes. But she said her attendance at the court was necessary.

“We’re here for democracy, and I really think Leo’s here to stand up for the rights and freedoms of all Canadians,” Piao said. “I think what he’s doing is not only noble, but he needs the support of people to know that we agree and we’re going to support him.”

The Epoch Times sought comment from Douglas College but did not receive a reply.

Regardless of the court decisions in these cases, Pineda doesn’t think society will fast-track toward strong, universal restrictions or completely abandon them. He believes the outlook on the issue remains uncertain.

“I don’t know if there’s a strong enough connection between these university policies and what might happen in other institutions. It’s probably too distant from what might happen to come to any conclusions,” he said.

Editor’s Note: This story has been updated from the original version to reflect the decision by the Ontario court to dismiss the case filed by the McMaster University students against their school.