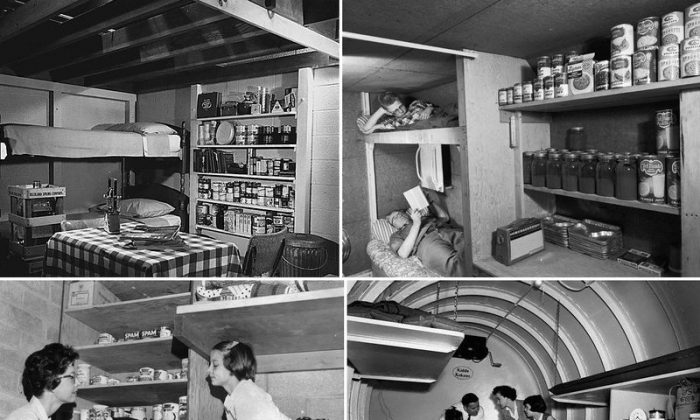 During the frightening years of the Cold War, a nuclear bomb could hit at any time. The only way to survive was to hide in a fallout house. Some people took their underground houses very seriously.

3970 Spencer street, Las Vegas. Looks like a perfectly normal Las Vegas home, right? Look again. This house is hiding another home underneath it. And not just any home. It is has a 15,000-square-foot underground base, two bedrooms, and is surrounded by “nature”—or as near to nature as a mural can get you. It also has a swimming pool, two jacuzzis, a sauna, a dance hall and a barbecue grill! Let’s admit it, it’s got more than your average city apartment.

Obviously, architects from the Underground World Home Corporation put a lot of heart into this prototype, which did not really catch on.

But if you want to admire his mastery of ’70s sci-fi decor, the whole complex was bought by the Society for the Preservation of Near-extinct Species. Let’s just hope they’re not implying something there.

This is a modern day ark, that can hold 499 people. It’s an amazing 10,000 square feet, which is around 42 school buses put together! Actually, literally.

Here comes the interesting part of the story. It was built in 1980s, long after radiation threat was over, by Bruce Beach, a former professor of computer science who has a specialization in nuclear radiation and its effects.

He came up with incredible idea. He dug a huge hole in the ground, parked old school buses in it, then poured in concrete, covered with dirt and voila! The shelter was done. It’s even more incredible from inside—it has a motel size septic tank, a well, a radio communication room, a chapel, a dental room, and two kitchens.

We thought it would take us 3 months to get to 500 followers. 3 years later we are almost there…. Who will be the 500th? Coincidentally there are about 500 places at Ark Two.

Obviously, only children would be allowed to enter these magical school buses.

Now, this shelter might make you want to go underground and never see the sun again. Vivos underground survival shelters specialize in a luxurious shelter experience. The property has been valued to 1.1 billion dollars, with 227 square feet per unit.

A prototype of Vivos shelters has already been built in Indiana and the second version is under construction somewhere deep in a German mountain.

You can earn your living there as well. All you’ll need is tens of thousands of dollars upfront, have a special skill or a useful profession, or, if not, as the last option, you can secure a spot for a future descendant by submitting your DNA.

Wait, what is this shelter for again?