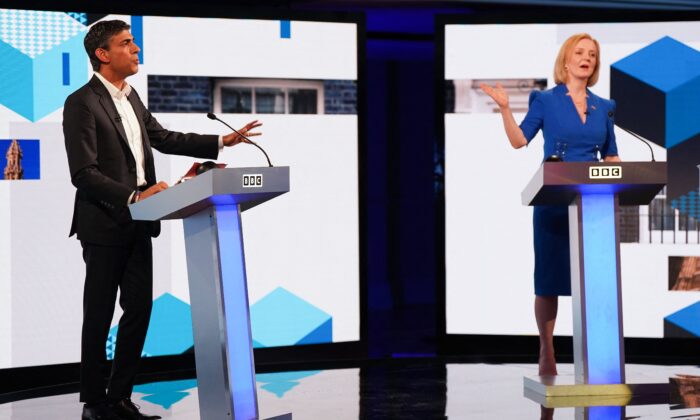 Britain's Foreign Secretary Liz Truss (R) and former chancellor of the exchequer Rishi Sunak, contenders to become the country's next prime minister, take part in the BBC's 'The UK's Next Prime Minister: The Debate,' in Victoria Hall in Stoke-on-Trent, central England, on July 25, 2022. (Jacob King/Pool/AFP via Getty Images)
Viewpoints

These Days of Openness and Transparency

One should not ask, said Bismarck, how sausages or politics are made.

This, of course, goes completely against the modern cult of transparency, supposedly the guarantor not only of clean government but also of democracy itself. If everything were transparent, nobody could do anything wrong (goes the theory), and our choices would be perfectly informed.

Alas, life is not quite so simple.

In Britain, the Conservative Party is in the process of choosing a new leader after the forced downfall of Boris Johnson. At one time the leader would have been chosen by haggling and maneuvering behind closed doors by the party elite, but in these days of openness and transparency, the membership must have its say—which, of course, is a far more democratic way of arranging things.

Candidates for the leadership had therefore to make an appeal to a large constituency. They had to distinguish themselves from each other. In the modern world, in which insult is increasingly the highest form of argument, it’s only natural that they, the candidates, should have done so by drawing attention to the bad record, the inconsistencies, the idiotic proposals, deficiencies of character, and so forth, of the other candidates by comparison with their own spotlessness.

This was all done in the hope and expectation that, the election once over and the leader chosen, everyone would forget what they had all said about each other. The public’s memory being a short one, the public would accept that someone who only a few days before was called an incompetent or worse, possessed of the ideas of a moron, had now become a valued, indeed essential, colleague and fine public servant who could be trusted always to do the right thing by the country.

Even if the details of the recent contest faded from memory, however, there would remain, like the grin of the Cheshire Cat, the impression that all the candidates were held in contempt by each other and believed by them to be incompetent at best and scoundrelly at worst.

This impression, justified or not, must have an unfortunate effect. Its corollary is that we are ruled by a pack of people who are only seekers after office, who don’t believe what they say, and use words only to advance their own careers. Any principle that they claim to espouse is but a cynical smokescreen or an instrument for their own petty ambition: Everything for them is but a means to the end, the end being their political ascent for its own sake. Presentation is all, substance nothing.

In short, there was probably more chance of obtaining a leader of stature under the old system than the new.

It’s disastrous in the long run if we come to believe that all our so-called leaders are nothing but scoundrels, liars, hypocrites, place-seekers, and so forth. This causes us to take a paranoid stance toward the world, in which nothing can be what it appears to be and in which everyone acts from the lowest of motives. Philanthropy itself becomes suspect, and kindness a cover for the urge to dominate. This is a Nietzschean worldview, Nietzsche having been the sort of philosopher who, with a piercing insight into some aspect of reality, took it for the whole, so that before long he became wildly and perniciously unrealistic.

In fact, no one’s life can bear too much examination. The Franco-Romanian philosophical and psychological aphorist Emil Cioran once wrote that the prospect of having his biography written ought to be enough to sap anyone’s will to live. Of course, Cioran had a special personal reason for saying this, since in his youth in Romania he had espoused the most hideous ideas and praised Nazi Germany to the skies. He spent the rest of his life repenting this, though at the same time half-covering his traces. Nevertheless, Cioran’s aphorism is surely correct: A man who has nothing to hide can scarcely be said to have lived.

The way to be a bore, said Voltaire, is to say everything, and probably we have all met people who are unable to tell a story without including the most irrelevant, circumstantial, or dull detail. Generally, such people cannot be derailed: All attempts to do so fail, and they return to their narrative rails as a dog to its vomit.

The demand that people should be entirely frank and open is therefore a demand for a very boring world, though fortunately it’s also a demand that’s impossible to fulfill. Nevertheless, the pretense that what’s impossible isn’t only possible but desirable is potentially harmful. To chase chimeras is worse than a mere waste of time and effort. It’s often at the root of the most terrible cruelty.

There’s a balance to be struck in human life between openness and concealment. Needless to say, we don’t want everything to be secret, but insofar as a degree of illusion is necessary for life to be bearable, we don’t want incontinent openness either. Imagine a world in which all our thoughts were immediately and completely transparent to others (and theirs, of course, to us): There would be mass slaughter within minutes.

The balance between openness and concealment is a matter of judgment, and where there’s judgment there’s error. The equilibrium between them is inherently and permanently unstable. It’s obvious that wrongdoers favor concealment, but it isn’t therefore true that the righteous favor openness. Those who demand openness in the affairs of others are often reluctant to reveal their own. It’s precisely because of our inherent need for secrecy that the idea of a surveillance state is so appalling to us, even if we in fact do little or nothing that could be of interest to such a state.

It’s very rarely that we hear of openness as other than a quality to be desired, but those who praise it are never completely open themselves and may even be more secretive than average. They praise openness the better to conceal what they’re doing; openness is for others, not for themselves.