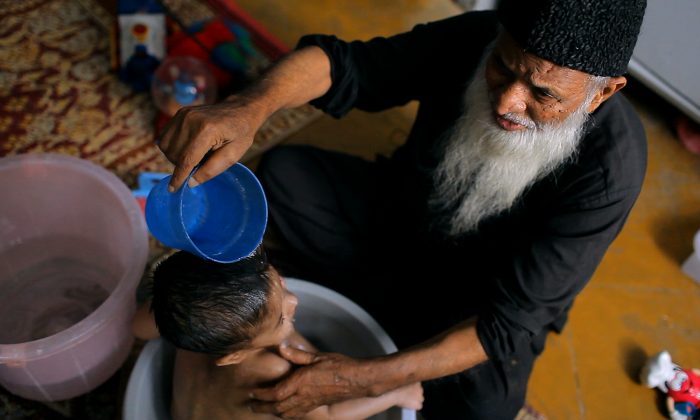 Pakistani philanthropist and humanitarian Abdul Sattar Edhi in a scene from "These Birds Walk," a documentary by Omar Mullick and Bassam Tariq. (Image courtesy of Oscilloscope Laboratories.)
Entertainment

A man from humble roots, Abdul Sattar Edhi is not just Pakistan’s greatest philanthropist and humanitarian, he is pretty much the only one. He is also ninety years old and deeply concerned about the future of those who rely on his network of orphanages, shelters, and hospitals.

We meet one of his young wards up-close-and-personal and come to know one of his employees to a lesser extent in Omar Mullick and Bassam Tariq’s ruminative documentary “These Birds Walk,” which opens this Friday in New York.

Omar is ten-ish and a frightful handful, but he has never experienced the support that comes from a loving home. The closest thing he knows is the relative safe haven of his Edhi orphanage.

Frankly, adult supervision appears rather lacking here as well, but it beats the streets. Omar asserts himself through bullying, because it is the only defense mechanism he has.

Asad sort of understands this. He was once in Omar’s place. Now he is one of the many drivers working for the Edhi Foundation.

It is his job to return children to their parents when the Foundation finally has enough of them. He usually does not see tears of joy from anyone during these runs. Nonetheless, he often risks his life, venturing into Taliban-controlled territory.

“Birds” is a short film, but it is dominated by long, slow, impressionistic sequences, punctuated by jarring depictions of abject neglect and disregard for Pakistan’s cast-off children, so pick your poison.

What viewers witness is often shocking, but Mullick and Tariq never ask how things got this way, or more to the point, why is it Edhi has so little competition—or so the audience is clearly led to believe.

In terms of religion, Pakistan is a remarkably homogenous country and it is not without its privileged class, but Mullick and Tariq avoid the obvious question like the third rail.

Frankly, their strictly observational approach seems to be a deliberate strategy to evade such awkward issues. Still, the fact their documentary starts and ends with Edhi and his concerns regarding impending mortality speaks volumes. After all, he was pushing thirty by the time of the Partition.

Mullick and Tariq capture some striking images, but more often than not, they serve to fetishize the extreme poverty of its subjects.

“Birds” convinces us Pakistani children face a grim reality, but then what? Well intentioned perhaps, but hollow inside, These Birds Walk opens this Friday Nov. 1 in New York at Village East.