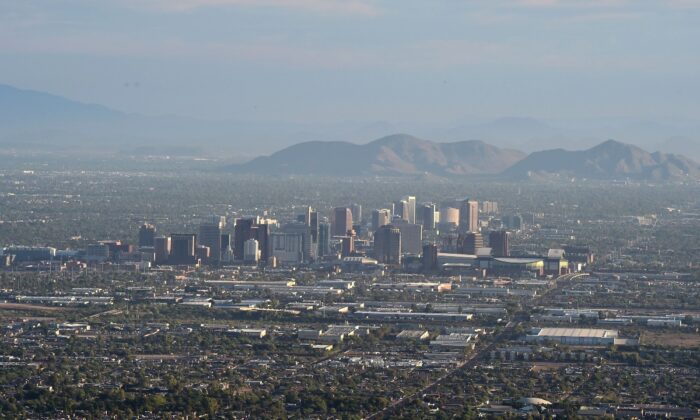 The downtown city skyline is seen in Phoenix, Ariz., on Aug. 28, 2018. Phoenix registered the highest inflation, with yearly CPI increases of 13 percent in August 2022. (Robyn Beck/AFP via Getty Images)
Inflation

These Are the Cities Where Inflation Is Rising the Most

As Americans deal with decades-high inflation, some regions of the country have been hit harder than others, such as the Arizona cities of Phoenix, Mesa, and Scottsdale; the Florida cities of Tampa, St. Petersburg, and Clearwater; and the Texas cities of Dallas, Fort Worth, and Arlington, according to official numbers released by the U.S. Bureau of Labor Statistics (BLS) on Sept. 13.

Topping the list is the Arizona metropolitan area of Phoenix-Mesa-Scottsdale, with a Consumer Price Index (CPI) change of 0.80 percent in August, compared to two months ago. The yearly CPI increase was a massive 13 percent.

This was followed by the Georgia metropolitan region of Atlanta-Sandy Springs-Roswell, which had a two-month CPI increase of 1.30 percent and a yearly hike of 11.70 percent. Third on the list was Florida metro area of Tampa-St. Petersburg-Clearwater, with the same two-month increase as Atlanta region, but a slightly lower yearly inflation growth of 11.20 percent.

The Consumer Price Index for All Urban Consumers (CPI-U) rose 0.1 percent in August on a seasonally adjusted basis, after remaining unchanged in July, the BLS reported. Over the last 12 months, the all items index increased 8.3 percent before seasonal adjustment.

According to Marie Duggan, Ph.D., an economics professor of business management at Keene State College, New Hampshire, monopolization of markets where corporations “raise prices without losing customers” has played a key role in sustained inflation.

“One sees this with the cable bill, for example. There are only two companies that offer cable in some areas, and both charge quite high prices. If they raise the price, they often do so in unison, so that customers are forced to pay. Sometimes private equity buys up hundreds of homes in a certain area and then leases them,” Duggan said to finance website Wallethub.

The 40-year high inflation “falls squarely on the Federal Reserve,” said Burton Abrams, professor emeritus of economics at the University of Delaware. Abrams believes raising interest rates will only worsen inflation because it will dampen economic growth. “Neglecting cost-benefit analysis and incentives that produce adverse effects on employment and productivity is a recipe for an economy in decline,” he added.

Ernie Goss, Ph.D., MacAllister Chair and professor of economics at Creighton University, said that three factors resulted in the current U.S. inflation: the Trump stimulus program, the Biden stimulus program, and the Fed’s money supply expansion by 35–40 percent from the pre-pandemic level. To slow down inflation, Goss said, “the Federal Reserve must remove its money supply stimulus.”