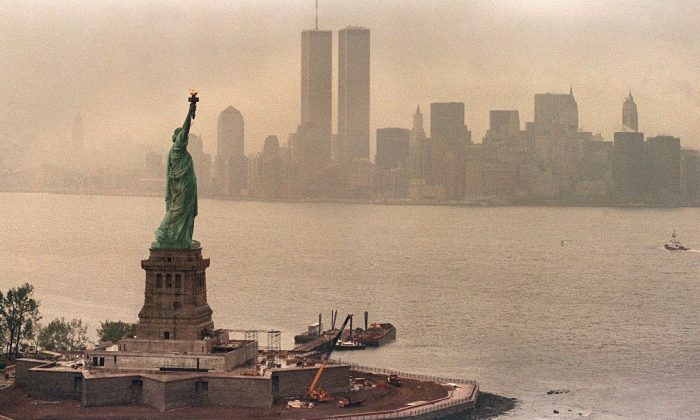 A picture taken 20 May 1986 in New York shows the Statue of Liberty and the Twin Towers of the World Trade Center in the background. (MARIO SURIANI/AFP/Getty Images)
New York

Commemorating 9/11: Rare Videos Not Released for Years After Attacks

Explosions boom as the first World Trade Center tower begins to collapse. The man who held a video camera nearby pointed the camera up for 5 seconds. He was so close to the building he had to flee almost immediately.

Meanwhile, another man films the tower collapsing from a boat. His voice goes quiet in shock. We can almost hear his heart pounding, and then his words, collapsing under immense grief, speak for us all.

These images, unseen for years after the 9/11 attacks, remained hidden for a number of reasons. Some are so graphic they were held back to respect the victims and their families. Some were collected by the FBI and the Department of Justice for the investigations that followed.

On a day of mourning for America, these videos provide a unique perspective not seen by the vast majority of people in the days, months, and years after the attacks. The slogan for 9/11 is “Never Forget.” These videos can serve that purpose. If you shed a tear, you are not alone.

On Sept. 11, 2017, President Donald Trump and first lady Melania Trump observed the anniversary of the attacks with a moment of silence at the White House.

Workers at the Pentagon in Arlington, Virginia, began the day with the unfurling of the American flag to mark the 16th anniversary of the 9/11 attacks on the United States.

In New York City, Wall Street traders and others held a moment of silence to remember victims, bowing their heads at the toll of a bell.

A ceremony will take place at the 9/11 Memorial in New York City, where mourners gather as they have every year since the attack, for the annual reading of victims’ names from both the 1993 and 2001 attacks on the World Trade Center.

A citywide moment of silence was also observed at 8:46 a.m., the time American Airlines Flight 11 crashed into the North Tower, with a second pause at 9:03 a.m. when United Airlines Flight 175 struck the South Tower.

Further moments of silence were observed at 9:37 a.m., when American Airlines Flight 77 hit the Pentagon; at 9:59 a.m. when the South Tower fell; at 10:03 a.m. when United Flight 93 hit the ground near Shanksville, Pennsylvania; and at 10:28 a.m., when the North Tower collapsed.

Osama bin Laden and the al Qaeda terrorist group claimed responsibility for the suicide attacks and a U.S.-led war in Afghanistan followed.

U.S. forces killed bin Laden in May 2011 in a surprise raid on his hideout in Abbottabad, Pakistan, ending a nearly 10-year hunt for the al Qaeda leader.