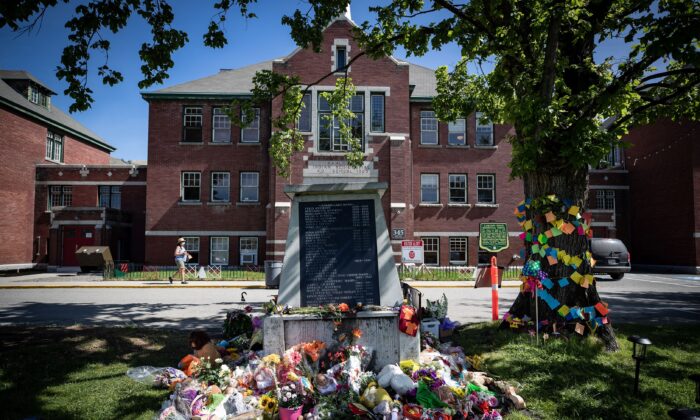 Flowers and cards left at a monument outside the former Kamloops Indian Residential School, in Kamloops, B.C., on May 31, 2021. (The Canadian Press/Darryl Dyck)
Viewpoints 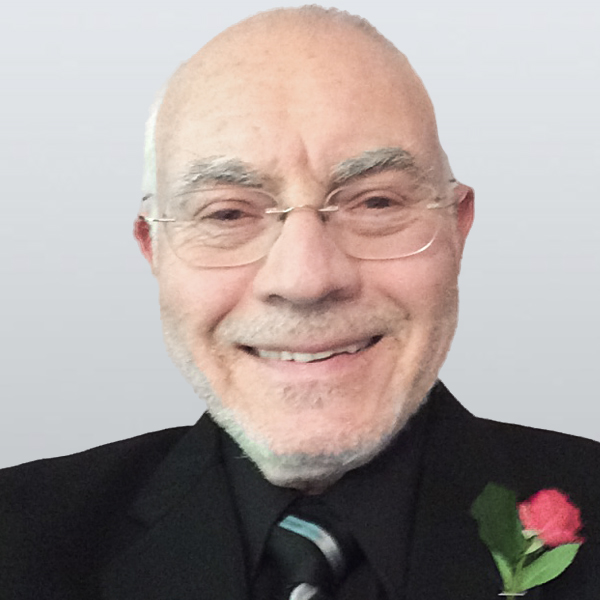 Since the media release by the Kamloops Indian Band on May 27, 2021, about “the confirmation of the remains of 215 children [buried in unmarked graves] who were students of the Kamloops Indian Residential School,” similar announcements across the country have come fast and furious.

The news stories and unabated attention devoted to unmarked graves and missing students quickly accelerated after the Trudeau government’s announcement on Aug. 10, 2021, of $320 million “in additional support [on top of the millions already promised] for Indigenous-led, Survivor-centric and culturally sensitive initiatives and investments to help Indigenous communities respond to and heal from the ongoing impacts of residential schools,” including “to research and locate burial sites as well as to commemorate and memorialize the children who died at residential schools.”

Including the Kamloops site, where ground-penetrating radar was used to detect the graves, reputed unmarked grave sites at 34 residential schools and potential burial locales have been identified since May 2021. Nevertheless, not a single body associated with any residential school has been recovered, let alone forensically examined. Although five of the six pre-Kamloops searches found human remains, none represented missing Indian Residential School (IRS) students or other missing persons.

Still, none of these negative findings have put a damper on more scavenger hunts for unmarked graves, whose only prize has been the money earned and jobs created from the search itself along with generous funding for ancillary activities like healing and commemoration. This applies in spades to a March 3, 2022, CBC story about a search at the site of the former Holy Angels Residential School in Fort Chipewyan, Alberta.

The Roman Catholic school, which was demolished in 1974, is said to be the last whereabouts of 89 “missing” children representing at least four different aboriginal groups who attended the school between 1880 and 1953.

This news was accompanied by the burning to the ground of the Nativity of the Blessed Virgin Roman Catholic Church associated with the school in the early morning hours of Aug. 25, 2022. Like the dozens of Catholic and other churches that were also destroyed following the revelations at Kamloops, this was termed by the RCMP as a suspected case of arson, a reasonable assertion given the accusations of student abuse—none proven—at the Holy Angels school.

This destructive act is particularly troubling because the Catholic Diocese of St. Paul sold the building to All Nations Church, a non-denominational organization based in Fort McMurray, in December 2020, and because Fort Chipewyan has not had a local priest for decades.

It bears questioning why some bands that so far haven’t come across any “unmarked graves” are searching for them, when no children are being searched for by any of their relatives. How can children be missing when nobody knows their names or is looking for them?

Also, why was “an archaeological team from the University of Alberta … hired to search the former school grounds for potential unmarked graves,” as the Edmonton Journal reported in an article about the Holy Angels school, when there is no evidence to suggest that students were secretly buried?

Yes, the National Centre for Truth and Reconciliation (NCTR), the successor to the Truth and Reconciliation Commission (TRC) charged with reporting on the history, operation, and legacy of Canada’s Indian Residential Schools, lists the names and date of death of the 89 Holy Angels students on their Memorial Register who are said to have died at the school or within a year of their discharge.

According to the NCTR, “Following the direction provided by Survivors [i.e., any indigenous person who attended an IRS] during the community engagements held in 2018 and at the National Gathering of Elders, only the names and dates of death will be public.”

But this directive should not have prevented the NCTR from publishing a summary of the cause of death and place of burial for each individual school—something it did for the schools as a whole. Refusing to publish the school-level findings may have helped precipitate the trauma and rage felt by indigenous people across the land, resulting in church burnings like the Fort Chipewyan one.

To this day, it remains unclear how hard the NCTR has been looking for the fate of the “missing children” in publicly available archival sources. If it has been working diligently on this issue, no detailed findings have been released to the public or the affected communities since 2015. This would be unconscionable.

What is clear, however, is that whenever independent researchers like Nina Green undertook such searches at their own expense, most of this information was quickly found “buried” in publicly accessible federal and provincial archives, and the students’ physical remains were nearly always interred in band cemeteries.

Other research has shown that so-called “students who never returned” from their residential schools were often sent home when terminally ill. If they died in the school infirmary, their remains were transported to their reserves whenever it was feasible. And if they died in a nearby hospital, they were often interred on its grounds or in a nearby cemetery if they could not be sent home.

But the best evidence that there are no missing children comes from TRC/NCTR records and from our understanding of traditional indigenous mortuary practice. Of the 89 memorialized Holy Angels children, only 14 (16 percent) died less than 80 years ago. The last student died in 1953, 69 years ago. Like most peoples, whether literate or not, the Chippewa/Ojibway/Métis/Cree ethnic groups whose children attended Holy Angels did not maintain detailed multi-generational genealogies. Together with the widespread neglect of existing reserve cemeteries full of long-decayed wooden markers that were never replaced, this helps explain why no band members are frantically looking for missing ancestors who died more than seven decades ago.

In sum, there is no proof that any student listed on the Memorial Register for the Holy Angels or any other IRS was not appropriately buried or that their death certificates were not signed by the proper authorities. Nor is there evidence of a single child murdered and tossed into an unmarked grave in the dead of night at any government-supported IRS during the schools’ 113-year period of operation.

Hymie Rubenstein
Follow
Hymie Rubenstein is editor of The REAL Indian Residential Schools Newsletter and a retired professor of anthropology at the University of Manitoba.