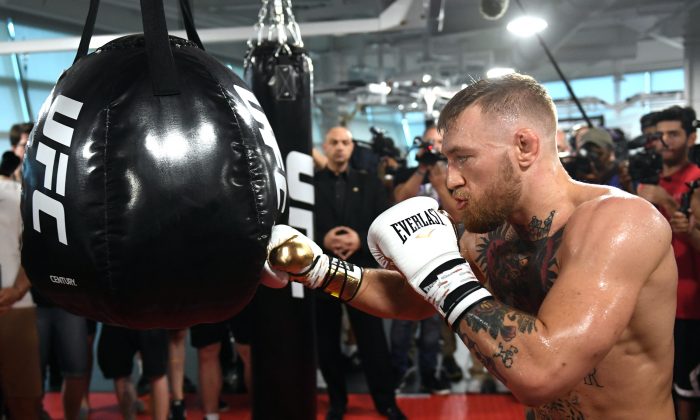 Clause in Conor McGregor’s Contract Could Destroy Him

Conor McGregor better not try any “funny business” on Saturday night while he’s inside the ring with Floyd Mayweather.

There has been speculation that if McGregor, a two-weight UFC champion, starts having serious problems against Mayweather—undefeated at 49-0—he might resort to using MMA moves like attempt a takedown, throw a kick, or use a standing elbow.

According to a clause in his contract, any UFC-style moves would result in an automatic disqualification, Yahoo reported on Friday.

Some sport books even offer one the chance to bet on it, like South Point Casino, which has a “Will McGregor be disqualified during the fight” prop bet.

Dana White, the head of the UFC, told reporters that he believes McGregor likely won’t be disqualified.

“There is a huge penalty clause in the contract,” White told Yahoo Sports, adding that he “[bets] that he won’t” be disqualified. “The athletic commission would keep the entire purse and decide what to do,” White said.

According to the report, “McGregor would immediately put at risk a portion of his share of the fight, and potentially the entire thing. McGregor is expected to earn tens of millions of dollars from what many believe will be richest prizefight in combat sport history.”

“The civil lawsuit that Floyd Mayweather would have on Conor McGregor would ruin him,” White said.

“What you do in a civil lawsuit like that is you look at Floyd Mayweather’s last three fights, including this one,” White said. “The number is massive. So what are the damages? You have to have damages. The damages would be incredible.”

White noted the penalty would be catastrophic.

Last month, the UFC president told reporters that “he would get sued beyond belief if he does anything but hit Floyd Mayweather with his hands to the head and body.”

“Conor is a bit of a wild man,” White told USA Today at the time. “But he likes money as much as Floyd does. If he wants Floyd to have all his money, that’s the way to do it.”

And it’s unclear how much money McGregor or Mayweather are getting paid, but as one sports commentator, Brent Musburger noted, “his life should be set, his children, his grandchildren, several generations.”