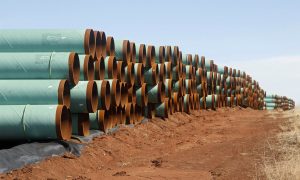 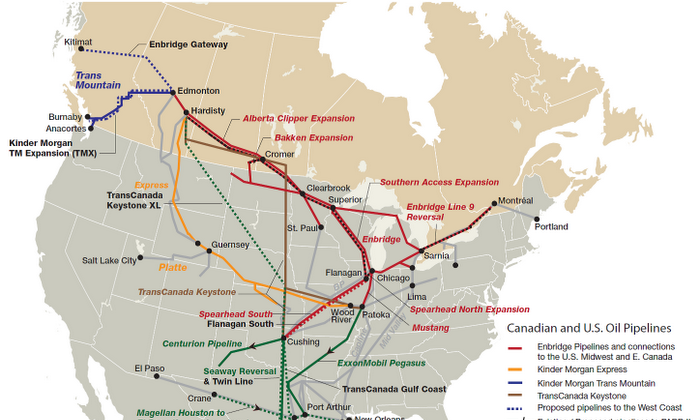 A map shows the current and proposed Canadian and U.S. pipelines (response.restoration.noaa.gov)
US

A question on many people’s minds is whether the pipeline that leaked 50,000 gallons of oil near the Yellowstone River is how frequently spills happen in the United States?

The Environmental Protection Agency says there’s 14,000 oil spills each year “despite the nation’s best efforts to prevent spills.” The agency noted that “many spills are contained and cleaned up by the party responsible for the spill, some spills require assistance from local and state agencies, and occasionally, the federal government.”

The manager of the Poplar Pipeline, Bridger Pipeline LLC, said in a phone update that the leak–which took place on Saturday–was “shut in.” Cleanup crews are currently working to contain the spill.

How Does the Leaky Yellowstone River Pipeline Size up with Keystone XL?

According to a 2002 U.S. Department of the Interior Minerals Management Service report, pipelines were responsible for 16 percent of the volume of oil spilled into U.S. waters, including both offshore and onshore spills.

Robert Anderson, an oil and gas attorney, in a response a Quora question, noted that there “are approximately 55,000 miles of crude oil trunk lines (usually8 – 24 inches in diameter) in the U.S. that connect regional markets.”

The Environmental Protection Agency says there’s 14,000 oil spills each year “despite the nation’s best efforts to prevent spills.” The agency noted that “many spills are contained and cleaned up by the party responsible for the spill, some spills require assistance from local and state agencies, and occasionally, the federal government.”

The spill, which took place over the weekend, is located near the 2013 Pegasus pipeline spill, which let out thousands of barrels of crude oil. The spill contaminated the Yellowstone River in an area located about 10 miles west of Billings, Montana.

With any oil spill, there’s a portion of it that evaporates into the air. “Oil producers and refiners typically do not know to what extent or at what rate their oils will evaporate; the detailed chemical composition of the oil and its differential compositional changes over time,” reads an 2003 EPA study on oil spills.

It’s not clear how long it will take to clean the spill near the Yellowstone River. Cleanup crews are currently working to contain it.

A cancer-causing component of oil has been detected in the drinking water supply of an eastern Montana city just downstream from a crude oil spill that entered the Yellowstone River.

Elevated levels of benzene were found in water samples taken from a treatment plant that serves about 6,000 people in the agricultural community of Glendive near the North Dakota border, officials said.

Scientists from the federal Centers for Disease Control and Prevention say the benzene levels are above those recommended for long-term consumption but don’t pose a short-term health hazard.

Truckloads of bottled water were coming in Tuesday, and residents were warned not to drink or cook with water from their taps.

Some residents criticized the timing of the Monday advisory and adding to the frustrations was uncertainty over how long the water warning will last and why company and government officials still don’t know how to remove crude trapped beneath the ice-covered Yellowstone River.

“It’s scary,” said Mickey Martini, a 79-year-old Glendive resident. “I don’t know how they’re going to take care of this.”

The Associated press contributed to this report.