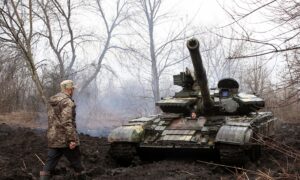 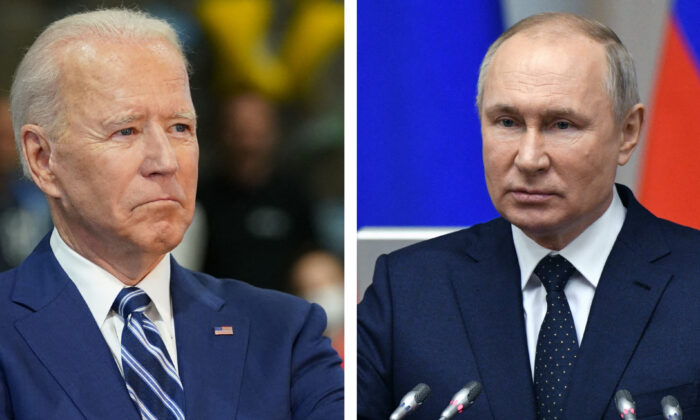 (L) President Joe Biden waits to speak as he visits the Sportrock Climbing Centers in Alexandria, Va., on May 28, 2021. (Mandel Ngan/AFP via Getty Images) (R) Russian President Vladimir Putin delivers a speech during a meeting with members of the Council of Legislators of the Federal Assembly, at the Tauride Palace, in Saint Petersburg, Russia, on April 27, 2021. (Alexei Danichev/Sputnik/AFP via Getty Images)
International

‘There Were No Threats’: Biden Says the ‘Last Thing’ Putin Wants Is a New Cold War

Following a closed-door meeting with Russian President Vladimir Putin, President Joe Biden said his agenda isn’t designed to go “against Russia” but that he’s attempting to promote the interests of “the American people.”

The two leaders met for about 3 1/2 hours in Geneva, after both acknowledged that U.S.–Russia relations were at their lowest point in decades.

“I told President Putin my agenda is not against Russia, or anyone else, it’s for the American people. Fighting COVID-19, rebuilding our economy, reestablishing relationships around the world,” Biden said at a news conference, adding that Russia and the United States need “stable and predictable” ties.

When asked about the conduct of the meeting, Biden said “there were no threats” by either of them.

“We need to have some basic rules of the road that we can all abide by,” he said, adding that the “last thing” Putin wants is a new Cold War.

Issues that were discussed, according to Biden, include cyberattacks, human rights, and alleged election interference, among other topics. In recent weeks, federal officials have claimed that Russia-based hackers were responsible for several high-profile breaches, including ransomware hacks targeting the Colonial Pipeline system and JBS Foods.

Biden stressed that he told Putin that cyberattacks or attacks by “any other means” against critical infrastructure such as the pipeline breach need to be “off-limits” moving forward. During an announcement last month, Biden said that Russia-based hackers were likely responsible for the pipeline attack, but he said U.S. intelligence officials didn’t link the group to the Kremlin.

The president on June 16 didn’t elaborate on the potential consequences if hackers again target critical infrastructure systems within the United States. The administration earlier this year imposed sanctions on Russian financial institutions over the SolarWinds breach, which affected several federal agencies and, according to the White House, over alleged election interference in 2020.

Putin said in a press conference on June 16 that Russia and the United States have agreed to restart talks on curbing cyberattacks while shifting some of the blame toward Washington.

“And the question of who, to what degree, needs to take on responsibility, that should be resolved during the negotiation process,” Putin said.

During an NBC interview last week, the Russian leader denied that Moscow had anything to do with cyberattacks or had interfered in the U.S. election and claimed those allegations were part of a pattern of American politicians using Russia as a scapegoat.

“We have been accused of all kinds of things,” Putin said on June 14. “Election interference, cyberattacks, and so on and so forth. And not once, not once, not one time, did they bother to produce any kind of evidence or proof. Just unfounded accusations.”

Biden also touched on the situation involving Russian opposition leader Alexei Navalny, who’s been detained in a Russian jail, which Western powers said is a violation of his human rights. Biden said that if Navalny—who has long accused Putin of corruption—were to die, the United States would retaliate, and the consequences would be “devastating for Russia.”

But Navalny, Putin said, had ignored the law and knew that he would be arrested if he returned to Russia from Germany, where he received medical treatment from an alleged poisoning attempt. He said Ukraine also broke its ceasefire agreement with pro-Russian separatist rebels in eastern Ukraine amid a massive military buildup along the eastern border.

White House officials or Biden haven’t publicly said whether there will be another summit between the two.