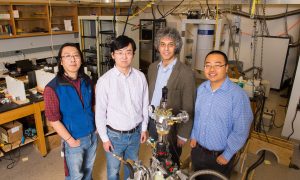 Moore’s law states that the number of transistors per square inch of integrated circuitry should double every year, a pattern that has fit reality reasonably well in the past 50 years. For each unit of computing power, electronic devices do seem to shrink every year, and accordingly, we can expect paper thin iPhones in our lifetime.

But the law of unlimited progress appears to be brushing up against the limits of physics as silicon chips approach maximal density, and for the past few years the naysayers of Moore’s law appear to double every year.

Some have pointed to using an alternative to silicon like graphene, a one-atomic thick carbon material. But graphene lacks a bandgap—more or less a necessary quality of transistor material—and thus its commercial prospects remain hypothetical.

The three-atoms thick transition-metal dichalcogenides (TMD) is another ultra-thin candidate for replacing silicon, and today researchers published an article in Nature detailing how TMD transistors could be mass produced.

“Existing growth methods for large-scale monolayer TMDs have so far produced materials with limited spatial uniformity and electrical performance,” the researchers wrote. “Our work is a step towards the realization of atomically thin integrated circuitry.”

The TMD transistors were grown on silicon wafers in 26 hours and at a temperature of 550 Celsius, which might pose a problem in the commercial manufacturing process. Still, the results are considered a leap forward in the field.

“Lots of people are trying to grow single layers on this large scale, myself among them,” says Georg Duesberg, a materials scientist at Trinity College Dublin, told Nature. “But it looks like these guys have really done it.”