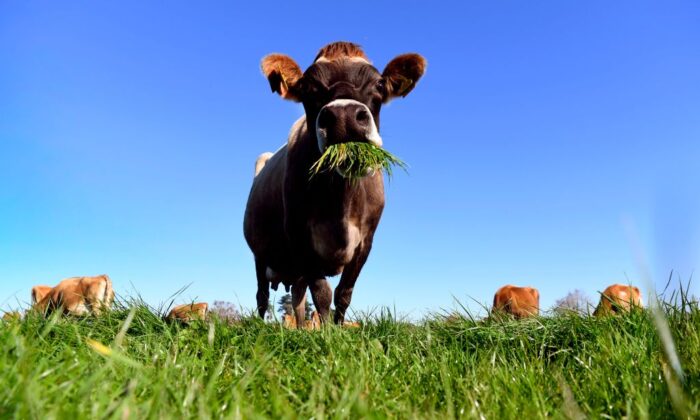 A cow eating grass on a dairy farm near Cambridge, New Zealand, on May 31, 2018. (William West/AFP via Getty Images)
Viewpoints

There Are Better Answers to Methane Than Fart and Burp Taxes

Methane emissions have garnered increasing attention in the global conversation about combatting climate change, particularly focussing on the Global Methane Pledge initiated at COP 26 in Glasgow in November 2021.

Initially, the Australian Government declined to join the agreement, but in keeping with its stronger stance on climate action, the new Albanese government signed the compact at the end of October.

Action to reduce methane emissions is an obvious response to combating climate change. However, society depends fundamentally on the two main anthropogenic methane sources: agriculture and fossil fuels. Hence, the cost of combatting methane emissions can outweigh the benefits.

Responses that add costs for livestock industries, such as have been introduced in New Zealand, are counterproductive in a world that is managing the risk of food shortages.

Likewise, measures that limit the emissions from the fossil fuels industry can be counterproductive in a world with high oil and gas prices, though this depends on how they are managed.

Putting aside the important questions about climate change, like whether it will be detrimental and whether we even ought to try to prevent it, the story of methane is scientifically interesting. It is also more complex than it first appears, as evidenced by the following little-known facts.

Firstly, the most significant methane sources of methane are natural, not man-made. Methane is a major product of anaerobic decomposition (decomposition where there is no oxygen), and consistent with this, the largest source of methane is tropical wetlands.

Efforts to measure methane from around the globe are undertaken continually using various methods. Measuring the locations and isotopic signatures of the methane can also help to approximately trace its original source (equivalent to carbon dating the methane).

The Global Carbon Project collates this information usefully in the Global Methane Budget.

Secondly, methane does not remain as methane in the atmosphere. Several mechanisms act over time to break methane down into carbon dioxide and water.

The half-life of methane is around 10 years (but estimates vary). Every year, about 600 million tonnes of methane are produced and consumed—only the relatively small difference between the two (less than three percent) results in the total atmospheric abundance increasing.

Methane moves as part of a natural cycle. The methane produced by cattle, for example, comes from carbon in the food they eat, which in turn comes from carbon dioxide in the atmosphere. When that methane again breaks down in the atmosphere, it has returned to its original source. It is consequently an overstatement to consider cattle emissions “anthropogenic” since it has been happening for all of known history.

Thirdly, between 2000 and 2007, the amount of methane in the atmosphere didn’t change. This period of stabilisation hasn’t been confidently explained because the total problem is sensitive to multiple inputs—it could have been a decrease in natural or manmade sources or increased strength of natural methane sinks.

In either case, for a total of seven years, the agriculture and oil and gas industries were continuously operating without causing any net increase in methane levels.

Fourthly, despite the best efforts of several Western nations to measure and reduce their methane emissions, these are not matched by the most serious global emitters—most notably, Russia.

Satellite measurements of emissions can spot sources all around the globe. Even before the vast methane releases from the recent Nordstream pipeline ruptures, Russia was being blamed for an enduring cavalier attitude to methane emissions, and major sources in Russia have been identified.

Historically, methane was considered a nuisance by-product of oil and coal production and was discarded and burnt by most producers.

In the modern oil industry, technology exists to retrieve much of the methane and sell it commercially. Methane in the form of liquified natural gas (LNG) is fast becoming a global energy market in its own right.

Hence, methane wastage in modern industry is less common and not permitted by many environmental regulations, but it still occurs in significant volumes in Russia’s oilfields and coal mines.

Fifthly, though most anthropogenic emissions (CO2, for instance) decreased during the COVID-19 economic shutdowns, methane levels instead increased at a record rate, growing 50 percent faster in 2020 compared to 2019.

Recent research has shown that the decrease in general emissions caused an increase in methane accumulation.

Specifically, nitrous oxides (NOx) are one of the emissions produced when burning fossil fuels, and they are controlled under environmental “air quality” regulations. Due to less consumption, nitrous oxide emissions decreased in 2020.

However, nitrous oxides also contribute to a process that removes methane from the atmosphere (via the production of the hydroxyl radical, OH), and hence methane levels increased in 2020.

Ironically, this means that environmental regulations for air quality—though they are in place for a reason (in sufficient quantities NOx cause smog and acid rain)—are also acting contrary to efforts to control methane levels.

The behaviour of atmospheric methane is complicated and sensitive to a wide range of factors.

While seeking to minimise methane emissions is understandable, governments need to be realistic about what can be accomplished and what price is worth paying. How we seek to implement our methane controls will determine what strain we put on the industry.

Taxing the cattle industry for being part of the methane cycle is entirely counterproductive. Yet developing cattle feedstock additives that decrease their methane production is simply good science.

Capturing methane produced from waste—for example, producing biomethane from abattoir waste processing—is eminently sensible; one way or another, we should seek to harness as much energy from waste as is practicable.

Similarly, minimising methane losses from the fossil fuel industries is sensible. Oil and gas companies do not object to such measures—methane is a marketable commodity, so they also don’t want to throw it away.

On the other hand, forcing fossil fuel companies to purchase carbon offsets against uncontrollable “fugitive” emissions is counterproductive. It doesn’t solve the actual problem, adds cost that harms their competitiveness, and doesn’t acknowledge that their emissions are a drop in the ocean compared to their customers and overseas competitors.

Finally, in light of recent science, environmental regulators should consider relaxing air quality standards. If an increase in NOx emissions will accelerate the breakdown of methane without incrementally harming the environment, that constitutes an “easy win” in reducing atmospheric methane.