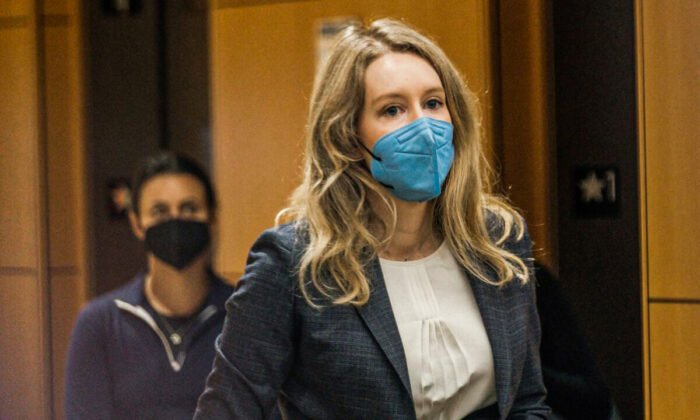 Elizabeth Holmes, the founder and former CEO of blood testing and life sciences company Theranos, arrives for the first day of her fraud trial, outside Federal Court in San Jose, Calif., on Sept. 8, 2021. (Nick Otto/AFP)
Judiciary

Theranos founder Elizabeth Holmes was found guilty on Monday of conspiring to defraud investors in her blood-testing startup that she has built into a $9 billion company.

A jury in San Jose, California, found Holmes guilty of four of 11 charges of fraud after seven days of deliberations, with each count carrying a maximum sentence of 20 years in prison.

Holmes, 37, was convicted by the jury of eight men and four women of three counts of wire fraud and one count of conspiracy to commit wire fraud by lying to investors about her company’s blood testing capabilities to raise funds for Theranos.

She was acquitted on three counts of defrauding patients who paid for tests from Theranos, and a related conspiracy charge. The jury could not reach a decision on three counts related to individual investors, for which U.S. District Judge Edward Davila said he intends to declare a mistrial.

Prosecutors said Holmes swindled private investors between 2010 and 2015 by convincing them that Theranos’ small machines could run a range of tests with a few drops of blood from a finger prick.

She faces up to 80 years in prison when sentenced by Davila but could get a lower sentence.

A sentencing date was not immediately set, and Holmes is expected to appeal.

“It’s been a long case,” Davila of California’s Northern District told the jury, media reported. “We collectively have been through many things.”

Holmes rose to Silicon Valley fame after founding Theranos in 2003. Her net worth was estimated at $4.5 billion by Forbes in 2015.

Holmes founded Theranos in 2003 when she was 19, and after some 10 years, told investors that the company could detect life-threatening conditions such as diabetes and cancer with just several drops of blood taken by a finger prick.

The company collapsed after the Wall Street Journal published a series of articles that suggested its devices were flawed and inaccurate. Holmes was indicted in 2018 alongside Theranos’ former chief operating officer and her former boyfriend Ramesh “Sunny” Balwani.