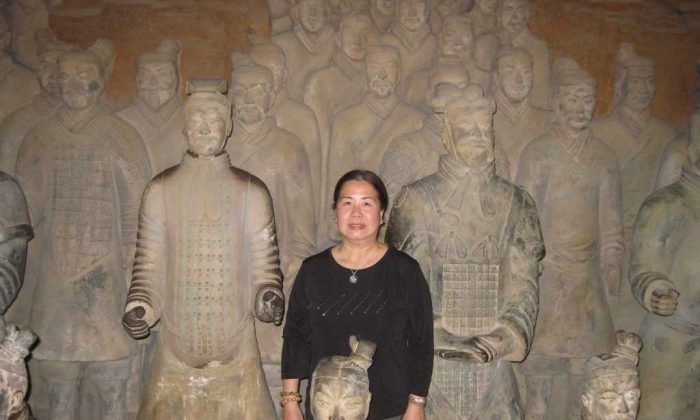 Sandy Phan-Gillis at the Mausoleum of Emperor Qin Shihuang, near Xi'an, China, in an undated photo. (via the Houston Chronicle/courtesy of Jeff Gillis)
China

A Texan woman who has been held since last March by the Chinese authorities, is now being charged as an American spy. As she proclaims her innocence, theories are circulating explaining why she has been charged.

The Chinese Foreign Ministry claims that Sandy Pham-Gillis, a naturalized U.S. citizen originally from Vietnam, had been “charged according to law by the relevant Chinese department” because of “her suspected crimes of espionage,” Reuters reported on Aug. 30.

Phan-Gillis’s husband, Jeff Gillis, said in a statement that the charges “are absolutely false.” The Chinese asserted his wife was in China on a spy mission in 1996, despite her passport showing no trip to China in that year.

A resident of Houston, Texas, Phan-Gillis was arrested and detained as she crossed from the southern Chinese city of Zhuhai to Macau, a semi-independent Chinese territory. She had been visiting as part of a trade delegation from her city.

In a letter transcribed by an American Consular official in China, Phan-Gillis said that politics, not crime, was the reason she was detained.

In her work as a consultant, Phan-Gillis helped connect businesses in Houston with their counterparts in southern China, the Houston Chronicle reported last October. She also came to know powerbrokers in the region.

In today’s China, where officials of high and low rank are regularly being investigated for corruption, connections with the wrong officials can lead to trouble. Some have speculated that Phan-Gillis was detained because of her connections.

Others have noticed that after Phan-Gillis was held for over a year without any charges, the sudden accusations against her followed upon charges being brought in the United States against several individuals recently accused of spying on behalf of China.

In June, Man Wenxia, a Chinese woman living in Florida was given a four-year sentence after she tried to buy engines for American fighter jets and unmanned aerial vehicles and to export them to China, the U.S. Department of Justice said. Developing a high-performance combat aircraft engine has been a priority for the Chinese military since the 1980s.

Reuters reported that in July, another Chinese national, Su Bin, was also sentenced to four years after he pled guilty in a California court to stealing classified information about the fifth-generation F-35 and F-22 aircraft.

This January, a Canadian citizen detained in 2014 was charged with spying and stealing state secrets, despite him and his wife having been released on bail last year. The charges came just a week after former Canadian Prime Minister Stephen Harper condemned China’s cyberwarfare and information theft against his country’s government computers.