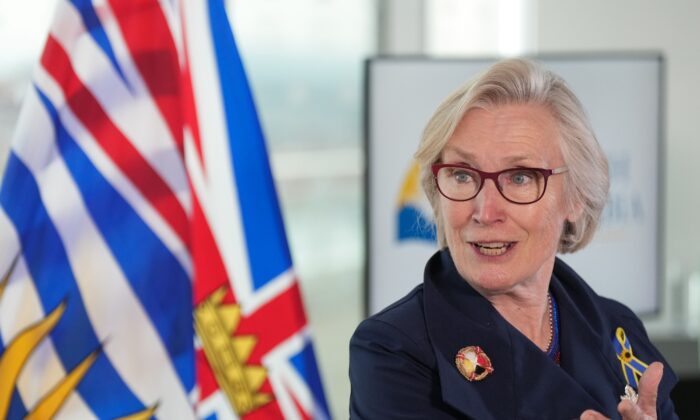 Canadian Minister of Mental Health and Addictions Carolyn Bennett speaks during a news conference after British Columbia was granted an exemption to decriminalize possession of some illegal drugs for personal use, in Vancouver on May 31, 2022. (The Canadian Press/Darryl Dyck)
Viewpoints

Theodore Dalrymple: BC Drug Decriminalization: The ‘If You Can’t Beat ’Em, Join ’Em’ Approach Is No Solution to Drug Abuse

In the face of bad behaviour, our societies have increasingly one response: retreat, appeasement, and surrender.

In California, for example, shoplifting has been all but legalized. Think of the advantages: the police time saved, the young people unstigmatized by a criminal record, the economic redistribution in an unequal society, the racial justice furthered (insofar as shoplifters are disproportionately of some ethnic minorities)! And if shop owners can’t afford it, they can either close altogether or move elsewhere.

British Columbia, which has a high death rate from overdose of illicit drugs, is about to legalize the possession of small quantities of drugs such as fentanyl, heroin, cocaine, and methamphetamine. The production, importation, and dealing in these substances will remain illegal.

This is being done in the name of harm reduction, on the principle that if you can’t beat ’em, join ’em. Drug abuse and its fatal consequences have increased spectacularly in recent years in B.C., which half the world thinks of as a paradise on earth, and the authorities have been powerless, or have rendered themselves powerless, to do anything about it. The only thing they can think of doing is to treat the increase as a natural phenomenon, such as an earthquake or rising tide, and limit the damage accordingly.

No one can say for certain what the effect of the decriminalization will be because the future (thank goodness) retains its ability to surprise us. Nevertheless, we would not be human if we did not try to guess, and my guess is that the effect of this measure will be cosmetic or symbolic more than anything else.

Let us briefly consider the statistics of crime in B.C. In 2020, there were 78,405 violent offences and 224,952 property offences recorded by the police, while there were 15,335 offences against the drug laws (other than cannabis) known to them.

Of those 15,335 offences, 3,363 ended in prosecution. In the first 10 months of 2021 there were more than 1,700 deaths from overdose of illicit drugs (I use the word overdose, though perhaps a better one would be poisoning, since there is no correct dose of methamphetamine, cocaine, etc.).

In other words, there is approximately one death by overdose for every two arrests in British Columbia. This in turn suggests that the chances of anyone being arrested in possession of a small supply of illicit drugs are minimal, since deaths can be only the tip of an iceberg of consumption. In 2020, 5,133 cases of infringement of the cannabis laws were known to the police, resulting in 153 prosecutions. Since the figure of 5,133 can be only an infinitesimal proportion of the real number of offences against the cannabis laws, we can see that the law is hardly draconian in its effects, whatever its intentions.

Thus, the proposed law to legalize the possession of small amounts of drugs will only regularize what is de facto the case already.

The effects on crime will probably be minimal. The law will leave the situation mainly untouched, for the importation, production, and distribution of illicit drugs will still be illegal, and it is because of these activities that most major crime attributable to drugs takes place. Meanwhile, the small-time user (it is no longer possible to say abuser in polite company) will still be faced by the necessity to pay for his drugs, and if he indulges in petty crime to do so, he will still do so.

The symbolism of the proposed law is perhaps its most important aspect. It is claimed that drug abuse is a public health problem and addiction an illness. I think this is weaselly. There is no question that drug abuse and addiction give rise to public health problems and have medical consequences, often very severe ones (death at a young age among them). But the consequences of a phenomenon are not quite the same things as the phenomenon itself. After all, sport has medical consequences, being one of the principal causes of injury in western society, but we do not call sport a public health problem or its repeated practice an illness.

However, it is now an orthodoxy that drug-taking and drug addiction are problems of public health and disease, as a water-supply contaminated with typhoid bacilli would be. Therefore, to treat people in possession of drugs for their personal use as criminals is akin to treating the ill as criminals. This is bad not because of its practical effects, which as we have seen are practically nil, but because it offends against the orthodoxy, and no sin is greater in the modern world than offending against an intellectual orthodoxy adopted, however recently, by a liberal political class.

In fact, drug-taking is a voluntary condition, even when a person is addicted. There are difficulties in abstaining, of course, physical, psychological, and social. For example, drug-takers enter a subculture to which they become attached and, if they continue in it long enough, forms the whole of their world.

Difficulty is not the same as impossibility, however. The fact is that millions of addicts have abandoned their drug habit. During the Vietnam War, thousands of American soldiers, through a combination of opportunity and the fear and boredom that is fighting a war, addicted themselves to heroin. When they returned home they gave it up, mostly without any assistance whatever, and they never returned to their addiction.

Taking drugs is a choice, in my opinion not a very good one, though I drink coffee every morning and hardly an evening goes by without a drink. The question is one of self-control. Like many others, I am inclined to eat more than is necessary to assuage my hunger; I go on eating after I am no longer hungry. This is not illness—it is human weakness, my own. If I allow myself to become yet weaker, eventually there may be medical consequences for me, as there are for so many others.

Drug-taking is a form of self-indulgence. It may be a response to an unfortunate situation, in which case we can truly sympathize, but it is self-indulgence all the same. Mass self-indulgence as exhibited in B.C. and elsewhere is undoubtedly an issue and gives rise to medical and public health problems, but at heart is a moral, spiritual, and cultural one. I do not claim to have the solution, either in theory or practice.