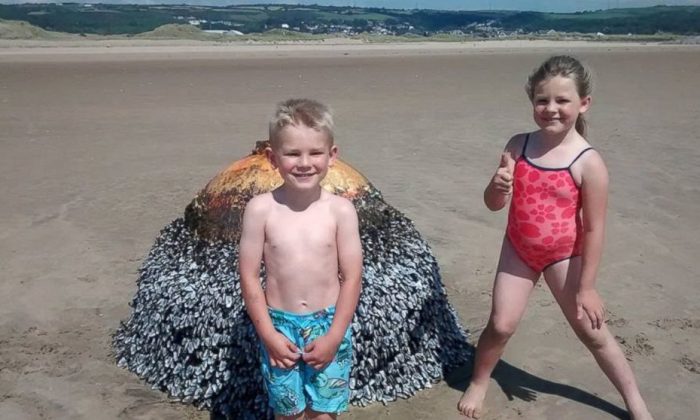 ‘Buoy’ Turns Out to be Bomb

Their two kids decided to pose in front of what their parents thought was a beach buoy, but it was actually an extremely dangerous object. It was later detonated, as the above video shows.

The Gravell family—Kelly, her husband, and her two kids Erin, 6; and Ellis, 4—noticed the object while walking on their local beach of Burry Port, Wales recently.

The kids became fascinated with it and the parents thought it was harmless so they began posing by it and taking pictures.

Turns out, though, it could have killed them all.

“We get things washed up all the time, so we thought it was a buoy. We never thought for one second it was a bomb,” Kelly told ABC.

Five days later, Pembrey Country Park officials announced on their Facebook page that the “buoy” was a U.S. military bomb.

Gravell and her husband Gareth were alerted to the news by a friend.

“The realization that it was a bomb—it was completely shocking for us,” she said. “We realize now just how lucky we were.”

The Coast Guard and a bomb squad later evacuated the beach and blew the bomb up in a controlled explosion.