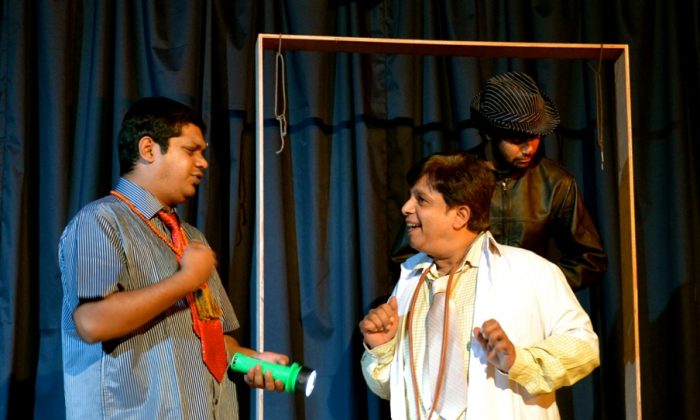 A glimpse from the performances based on Woody Allen's play, enacted in Bangalore. (Daksha Devnani/Epoch Times)
India

Inspiring kings or soldiers, vivid setups, and breath-taking scenes are not new to any regular day in theater art worldwide. India too has witnessed some of the amazing theater performances at different times in history.

Bangalore, India’s IT capital, with its rich multicultural society, has a long history of theater, but only recently have amateurs begun to work alongside professionals to create a diverse and easily accessible culture of contemporary drama.

Young professionals and students all over the city are joining theater companies to fulfill childhood dreams or express themselves on a vibrant platform.

One such contemporary theater is Cult Entertainment; run by students, businessmen, homemakers, and retired people who have made theater their first love.

Manju Kiran, 26, software developer and actor in an adaptation of Woody Allen’s Death, said, “During my work, I’ve always wanted to do something more, and drama is one place where I felt that I could express myself, and also have fun.”

“Drama helps me get an insight into a character who is vastly different from myself, and through his strengths and weaknesses, I can broaden my perspective, and improve my personal and professional life,” she said.

V. S. Manjunath, retired marine engineer and producer of the play, talked about how beneficial theater is for young people today. “An actor really has to put himself into character, which will help him understand why different people behave the way they do,” he said.

“In a production of this sort, actors also bond with so many people and can develop teamwork and leadership qualities.”

Divyesh Bhandari, 21, who is pursuing master’s degree in English and is the proprietor of Imbroglio Productions, a musical-theater company said that he was driven to create the production house out of passion and a need to strive for a better scene of musicals in Bangalore.

“I think drama has already become a mainstream art form with the number of people pursuing it. However sustaining it is difficult,” he said. “Imbroglio aims at putting up meaningful musicals in and around Bangalore.”

Divyesh also stressed that proper procedure regarding various pieces of music must be followed. “It’s important to go the legal way, by acquiring copyrights and registering your production house, which a lot of houses tend to neglect.”

Imbroglio’s first show, Dreams: A Musical Journey, an original production featuring music from Disney, was held in May 2012.

With more and more Bangaloreans, young and old, taking up serious, independent theater, the scope for this diverse art form looks promising, gradually establishing itself into the ranks of mainstream professions.