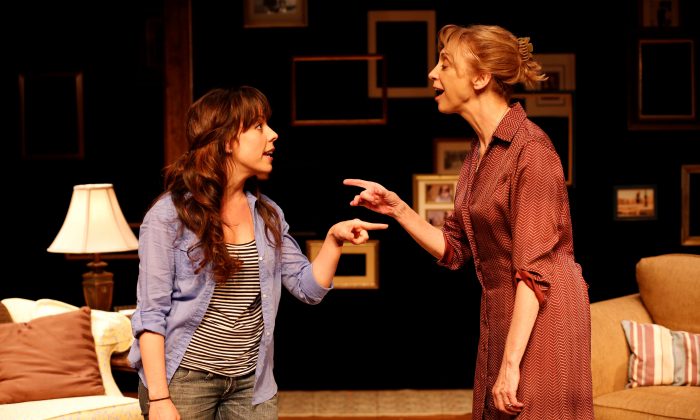 Daughter (Leslie Krtizer) returns home to live with Mother (Catherine Cox), in a musical about the difficulties of living with dementia. (Carol Rosegg)
New York

Not always that memorable
By Judd Hollander

NEW YORK—There’s poignancy and pain aplenty in the two-character work “The Memory Show” (book and lyrics by Sara Cooper, music by Zach Redler), now being presented by The Transport Group at The Duke on 42nd Street.

Daughter (Leslie Kritzer) has returned home to live with Mother (Catherine Cox), a lonely divorcee who’s beginning a long slide into dementia. The two have never had a particularly good relationship, and Mother’s ever-worsening condition does nothing to ease the strain.

Her illness often reduces her to little more than a stubborn child—this role-reversal premise being a central theme of the play.

There’s nothing funny about dementia. Cooper, as book writer, does a great job of tapping into the universal fear of this condition, one which piece by agonizing piece robs people of everything they are until they are eventually trapped in their own memories. They can barely articulate these memories to themselves, let alone those around them.

Yet memory is highly subjective, as demonstrated by Mother and Daughter’s different recollections of things that happened long ago. The remembrances of Mother’s long-absent husband and questions of exactly why the parents broke up are examined during the course of the show.

Also present is the idea that the love a parent has for his or her child can be a powerful force, both as a gift and a weapon. This distinction is not always clear to the recipient.

While the show would have worked wonderfully as a play, the introduction of music into the mix takes away from the story at times, especially since the tunes used are not all that memorable and are rather repetitive.

Kritzer, with some of the ballads she delivers, is able to tap into the angst of a person watching her parent slowly disintegrate. But other moments, like when she’s singing about how she has to clean up after her mother when the older woman goes to the bathroom, really don’t work.

It doesn’t help that Cox’s singing comes across as more of a screech than anything else. This may have been done in order to show the affliction of her character, but the effect does not mesh well with what is being shown on stage. Conversely, Cox is very effective in her dramatic moments, and is more than able to hold her own in that regard.

Kritzer does a fine job as Daughter. A woman seemingly at loose ends in a life going nowhere, she probably didn’t give up all that much, other than her freedom, in order to come home.

Kritzer is also able to bring across Daughter’s pain and endless frustration with her evermore erratic parent. She has the sad knowledge that the situation will only continue to grow worse and that commitment to some kind of care facility is the only eventual outcome—something she has so far refused to do.

Both Cox and Kritzer also play off each other quite well in their various emotional and occasionally comedic scenes.

Joe Calarco’s direction is okay as far as it goes, but he’s unable to successfully bring together the dramatic and musical elements. The awkwardness of transition is glaringly apparent, which in turn often derails the emotional pace of the show.

Plus, since this is a work that doesn’t need to be musicalized in the first place, the attempt to do so needs to resonate on every level—which is not the case here.

Brian Prather’s set of Mother’s apartment is impressive, and Chris Lee’s lighting works quite well in setting the mood for the story.

“The Memory Show” sadly doesn’t work as well as it could, and the problems distract from the show’s ultimate message: In the end, memories are all a person has, and hopefully he or she will be able to share the important ones with someone who matters before it’s too late.