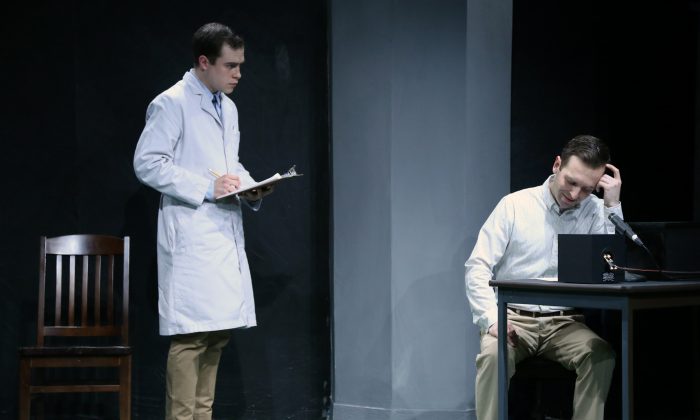 Whether to follow or resist orders
By Diana Barth

NEW YORK—Social psychology professor Stanley Milgram’s experiments at Yale University in the 1960s were ostensibly to determine if punishment could be utilized to make people learn more effectively. The tests determined far more than that. They delved into the human spirit so deeply that they are still debated to this day

Playwright Frank Basloe has created characters, some based on real people, some fictitious, that illustrate the participants’ varied points of view toward the experiments.

How many of us can stand and be counted when it involves going against the tide?

As a senior adviser, Milgram (Haskell King) selects James Sanders (David Edward Jackson) to develop the project for his senior thesis. Sanders will be the authoritative “experimenter,” and volunteers will take the role of “teacher,” who teaches a “learner.”

The teachers, actually the people being studied, are to ask questions of an unseen learner, who is in another room, yet whose answers can be heard.

If the learner’s answers are correct, they proceed to the next question. However, in the case of a wrong answer, the teacher must administer an electrical shock to the learner, who screams out in pain. The intensity of the shock increases as the work continues.

The learner in this experiment is played throughout by Saul Dashoff (Jonathan Randell Silver). He is in on the scheme to appropriately scream in pain according to the level of the shock. In actuality, no shock is administered.

Milgram and Sanders had thought that many teachers would not be able to proceed very far into the experiment because they wouldn’t be able to bear inflicting so much pain on another person. Surprisingly, about 65 percent of teachers were able to follow through to the end, some even appearing to enjoy their own cruelty.

However, in those cases where the teacher might be faltering, experimenter Sanders coolly advises: “Please continue. The experiment requires that you continue.” And in most cases, the teacher followed orders.

Later, when Sanders unexpectedly runs into a former “learner,” Harold Burden (Alex Herrald), Burden is offended when Sanders tries to explain the actual deceitful experiment and to apologize for it. He feels he has been used.

It eventually comes out that Dunleavy, along with a small group of male students, has been involved in a dreadful event involving these young men and a girl of 14. It is strongly hinted that there had been an improper sexual encounter. But Dunleavy was never named, as had been most of the others, and he is suffering from overwhelming guilt.

Coffin points out that Dunleavy is seeking atonement but lacks the courage needed to attain it.

Mitchell Halverson (Dylan Dawson), another of the perpetrators, rather than sitting out his suspension from Yale, joins the army; he would have been drafted anyway. (Such an incident actually took place, at a different time, however. But in the interests of making the drama more intense, the playwright has placed the situations closer together in time.)

Dunleavy has been in conflict as to whether he should go through with marriage to his fiancee, Margaret (Molly Carden), because of his ongoing guilt. He finally concludes that he has done the best he can do, and the marriage takes place. That Margaret is portrayed as a disabled person—she wears a leg brace—adds another element to the mix.

The play is rife with moral and ethical issues, which resonate long after one leaves the theater.

The play fascinates in that it deals with so many aspects of the human spirit: Do many of us simply follow the leader because we fear being different, not fitting in with the majority? Do we feel we must obey authority because that’s what we were taught as children?

How many of us can stand and be counted when it involves going against the tide?

Would we be willing to inflict pain on another human being if we felt protected by a particular project or system? Think of the Holocaust or other human catastrophes.

The play is rife with moral and ethical issues, which resonate long after one leaves the theater.

I was particularly drawn to see this play, as I had majored in the social sciences at Fordham College at Lincoln Center not too long after Milgram’s experiments took place. There was mention of them in my textbook, but I don’t recall much discussion in class, certainly nothing of the ethical issues that the experiments bring to the fore. Perhaps nowadays more would be made of the conundrums the experiments pose.

William Carden’s direction is superior, with each character distinct and distinctive. For me, those leaving the strongest impressions are Tommy Schrider, Jonathan Randell Silver for his easy cynicism and quick wit, David Edward Jackson, and Jared McGuire. But all give first-class performances.

The set by Jason Simms effectively conveys Yale’s sense of tradition and conservatism with its somber, deep brown mahogany paneling.

The play is produced by Ensemble Studio Theatre/Alfred P. Sloan Foundation, which is behind over 300 commissioned new American plays.

Diana Barth writes for various publications, including New Millennium, an arts publication. She may be contacted at diabarth@juno.com