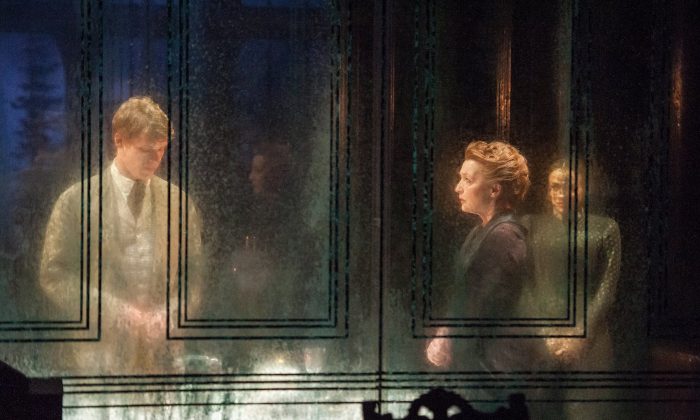 Haunted by the past
By Diana Barth

But running most deeply throughout is hypocrisy, the hypocrisy of the widowed Mrs. Helene Alving (Lesley Manville). Throughout her life she presented that her long-dead husband, Captain Alving, was a decent and loving man. This pose comes to hurt the person she loves most in the world, her son, Oswald (Billy Howle).

But running most deeply throughout is hypocrisy.
In actuality, hers was a toxic marriage to a philanderer and alcoholic. And so she admits these facts, finally, to her friend the moralistic Pastor Manders (Will Keen).

The pastor, however, is not helpful to Mrs. Alving’s desire to bring out the truth of her life. Like so many men (and women)—even in today’s world—he believes in keeping up the front of convention: Marriage is sacred and any imperfections in this deep and holy relationship must be kept hidden from the view of the world.

Because of the pastor’s attachment to convention, he advises Mrs. Alving to not purchase insurance on a recently built orphanage that is to be dedicated as a memorial to the late Captain Alving. The act may be seen as Mrs. Alving not placing enough trust in God to protect the edifice.

Lesley Manville’s tortured Mrs. Alving is a wrenching and moving portrayal.
Part of the household is young servant Regina Engstrand (Charlene McKenna), another terrible secret in Mrs. Alving’s arsenal of lies. Although Regina is often visited by her wily father, Jacob (Brian McCardie), Regina’s true parentage is in question. It is revealed only late in the play, when the revelation can only result in hurting a number of people.

Jacob is the kind of man who always looks for the best opportunity, morality be damned. He is able to connive financial backing from Pastor Manders to ostensibly establish a refuge for sailors, but in actuality it’s a place where easy virtue holds sway. Furthermore, Jacob hopes to make daughter Regina a useful fixture in such a place.

Oswald, a painter, has recently arrived from a stay in Paris. He finds himself unable to work and has become ill. He now wants to spend time with his mother, Mrs. Alving, with whom he has never been close.

When Oswald makes clear the nature of his illness, and unintentionally reveals the author of its cause, the horrified Mrs. Alving realizes that her lifelong attitudes and decisions have been wrong and wrong-headed.

As if Mrs. Alving’s recent discovery about her son is not painful enough, he faces her with the decision as to what action must be taken now. The final moments of the play are heartbreaking.

Director Richard Eyre has adapted this new version of Ibsen’s three-act play into a compact and swift-moving 100 minutes. It sacrifices none of the plot values but adds intensity to the play. His directorial work here is detailed and poignant and reveals the specific qualities of each character.

Tim Hatley’s set is masterful, with transparent walls permitting us to see action—such as Oswald accosting Regina, repeating the “ghost” of the past when Oswald’s father accosted the prior maid—which would, with traditional, opaque walls, cause the action to be hidden offstage.

Lesley Manville’s tortured Mrs. Alving is a wrenching and moving portrayal. (It won her the Olivier Award in England, the equivalent of the American Tony.)

Brian McCardie’s Jacob is the very picture of duplicity and greed. Will Keen’s Pastor Manders convincingly displays both hypocrisy and wishy-washiness.

Charlene McKenna’s Regina grows from subservient maid to a young woman who will insist on her place in the world.

Billy Howle’s Oswald leaves a lasting impression of sadness and grief. He’s a young man who has been cheated of his rights as a human being, his very life, due to the selfish acts of others.

Theater Review: ‘Heidi Chronicles’
“Ghosts” stands with the other milestones of Henrik Ibsen’s works—alongside “A Doll’s House,” “Hedda Gabler,” and “The Master Builder,” particularly in its display of the playwright’s understanding of women.

This outstanding production takes its place among BAM’s many presentations of Ibsen’s works.