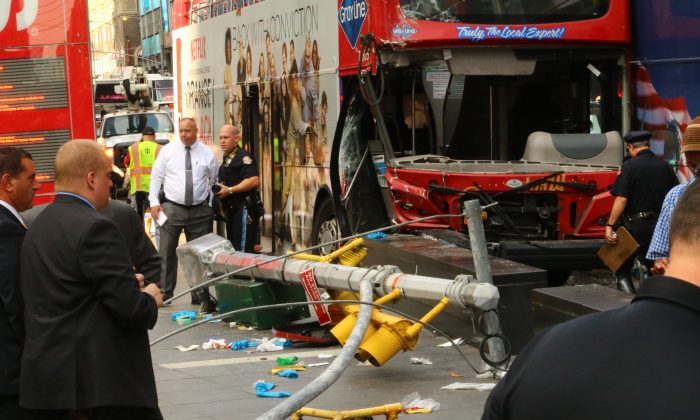 NEW YORK—Two double-decker tour buses collided in the Manhattan Theater District on Tuesday, injuring 14 people. The collision, which happened at about 3:15 p.m., also took down a massive light pole and sent pedestrians running for safety, according to one witness.

“They were screaming and crying and hysterical,” said Derek Jones, who sells souvenir “I Love New York” T-shirts at the intersection of 47th Avenue and 7th Street, where the accident occurred. Jones, who said he didn’t see the crash happen but heard a “loud boom,” ran over and saw one man lying on top of the bus, one woman on the sidewalk, and an empty baby stroller.

The same intersection was shut down earlier in the day because of a bomb scare, according to officials.

Fire department representatives at the scene said it was fortunate that one bus was only carrying a tour guide, and the worst injuries were likely only broken bones. The tour guide’s head was trapped under the dash and had to be removed by rescue workers.

The other 13 injuries were all pedestrians, many of whom were treated at the scene.

The fire department said that three of the injuries were serious, but none were believed to be life-threatening.

Tourists and curious onlookers surrounded the site for hours afterward, gawking at the damaged buses and causing serious pedestrian congestion in the busy area.

Cara McCaskill, 16, who is visiting New York City for the second time with her family from Winnipeg, Canada, didn’t see the accident, but watched as one woman was loaded into an ambulance. She said she found the ensuing chaos after the accident part and parcel with the city’s character.

“The hustle and bustle makes it what it is,” she said.

Another witness described a chaotic scene after the crash.

Traffic initially prevented officials from reaching the crash site, which had to be approached on foot.

“It sounded like something was falling from really high,” said Josh Price, visiting the city from Lafayette, New Jersey.

The glass in the front of the bus was shattered, and glass was strewn on the pavement.

Price said people were running around trying to help. He said he saw one person on the ground holding his leg and bleeding.

Rose Cantillon was visiting the city from Ireland and was nearby.

“I was sitting on a bench, and I turned around and heard screaming, and I ran,” she said.

The cause of the accident was under investigation Tuesday evening, and telephone calls to the tour bus companies seeking comment were not immediately returned.