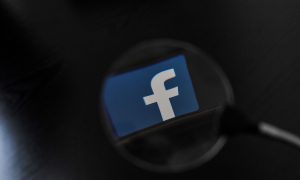 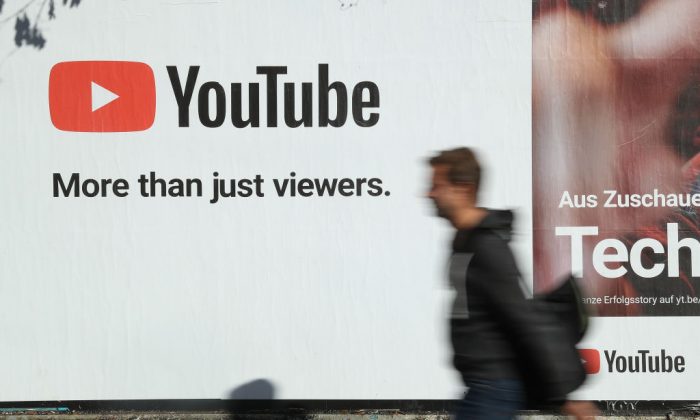 A man walks past a billboard advertisement for YouTube on October 5, 2018, in Berlin. (Sean Gallup/Getty Images)
US News

The YouTube ‘Adpocalypse’ and the Strategic Censoring of Opinion

Censored channels include those of popular YouTube comedian Steven Crowder and a history teacher who posted videos on World War II that included clips of Nazi speeches.

The New York Times reports that thousands of channels are being censored in this way. On June 5, YouTube released a statement about its “ongoing work to tackle hate.” It emphasizes efforts to squelch “videos alleging that a group is superior,” “videos that promote or glorify Nazi ideology,” and “content denying that well-documented violent events … took place.”

While it’s still uncertain what triggered YouTube to mass-censor the channels, much of the blame has fallen on Vox writer Carlos Maza, who previously called for physical attacks on conservatives and was offended by Crowder’s comments about him. Maza retaliated by demanding that YouTube demonetize Crowder’s YouTube channel, which YouTube did.

Afterward, Maza responded with a series of tweets, arguing that demonetization isn’t enough since some people can still find ways to finance their channels through donations or by selling merchandise. He wrote on Twitter, “Demonetizing [clap sign] doesn’t [clap sign] work. [clap sign] Abusers use it as proof they’re being ‘discriminated’ against.”

Many people were quick to criticize Maza’s actions. Some accused Maza of believing he can dictate who can and who can’t have a YouTube platform. Others noted that it’s not YouTube that decides what channels people choose to watch, but the viewers themselves, and that arguments over such issues should be handled through logical debate, not through censorship.

Many news outlets on the left, including The New York Times, supported the mass censorship. Their basic claim is that individuals who were censored are acting as stepping stones toward “extremism”—a new favorite political label for anyone who opposes socialist policies.

Many other outlets, meanwhile, criticized YouTube for its use of censorship. Tucker Carlson of Fox News referred to Maza as “a fascist, posing as a victim.” Journalist Glenn Greenwald also went on Carlson’s show, where he criticized outlets for supporting censorship. Greenwald said, “Imagine going into journalism and begging corporations to silence people.”

Of course, the conflict we’re now witnessing between conservatives and those who want the socialist shift in the West, is as old as socialism itself.

After it emerged, socialism couldn’t stand the light of day. It was unable to hold up in public debate, and by the early 1800s, the system was nearly destroyed before it even began. This turned around, however, with the rise of Karl Marx and his method of logical fallacy that could be used to shut down debate.

As Austrian School economist and classical liberal Ludwig Von Mises explained in his 1951 book “Socialism: An Economic and Sociological Analysis,” socialists around 1825 were unable to validate their proposed systems through debate.

“Schemes for a socialist order of society were extensively discussed at that time, but the discussion did not go in their favor,” he wrote, noting that the Utopian socialists “had not succeeded in planning social structures that would withstand the criticism of economists and sociologists.”

“It was easy to pick holes in their schemes; to prove that a society constructed on such principles must lack efficiency and vitality, and that it certainly would not come up to expectations,” he wrote.

By the mid-1800s, he noted, “it seemed that the ideal of Socialism had been disposed of. Science had demonstrated its worthlessness by means of strict logic and its supporters were unable to produce a single effective counter-argument.”

Yet, it was then that Marx arrived on the scene. Mises noted that Marx used the Hegelian dialectic for “arbitrary flights of fancy and metaphysical verbosity” to avoid logical debate. And instead of creating a logical proposal for socialism, he instead altered the field of debate.

“Since Science and Logic had argued against Socialism, it was imperative to devise a system which could be relied on to defend it against such unpalatable criticism,” Mises wrote. “This was the task which Marxism undertook to perform.”

Marx created three new systems. First, Mises explained, Marx “denied that Logic is universally valid for all mankind and for all ages.” Instead, Marx claimed that logic and intellectualism were part of “class interests.” This meant that socialists wouldn’t have to engage in logical debate.

Second, Marx claimed that society evolves and that it will naturally move from “capitalism” to socialism, then to communism. This created the concept of the “progressivism” toward the communist agenda of moral and social desolation. Anything that stood to prevent this “progress” could then be attacked as representing the “old” ways.

And lastly, Marx claimed that nobody should be allowed to propose what socialism should look like. As Mises explained, “Since the coming of Socialism was inevitable, Science would best renounce all attempt to determine its nature.”

This made it so that socialists could believe in socialist revolution without needing to propose how it would practically function. This also gave rise to numerous branches of socialism, which could claim, when facing scrutiny, that their system was different from the rest.

Google announced last year it would give $300 million to organizations to help fight “fake news,” including $25 million to YouTube. Among the partners was Vox Media. It may be that what Google calls “fighting fake news” is, in light of the actions of YouTube and Vox, actually censoring conservative viewpoints.

In any case, this whole online censorship debacle could backfire on YouTube and Vox in a spectacular way.

Carlson noted that platforms including Twitter, Facebook, and YouTube receive special privilege under Section 230 of the Communications Decency Act, which gives tech companies immunity from being sued for fraud and defamation. This special immunity, however, depends on them giving spaces for “true diversity of political discourse.”

Now that the online platforms are singling out conservatives for censorship, they may be violating this law—and could risk losing this special protection.

The reality, however, is that platforms with political agendas heavily based in socialism need to have censorship in order for their ideas to survive. For them, censorship to perpetuate their political interests is more valuable than following laws that should prevent them from political censorship.

The fact is, socialism can’t survive without censorship. This has held true since the days of Marx. It’s for this reason that socialists avoid logical debate and, instead, turn to personal attacks when their ideas are questioned. This is why they use often false labels, including “racist” and “xenophobe,” to shut down conversations.

For socialists, they can’t afford to have platforms for open debate, because doing so shows that their beliefs in the tyrannical and genocidal system of socialism can’t stand the light of day.