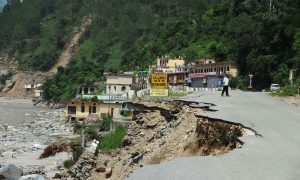 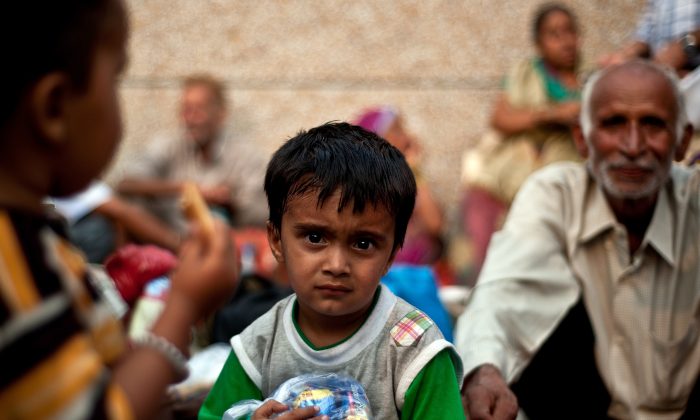 An Indian boy rescued from flood-hit areas waits with others before being sent to relief camps in Dehradun, the state capital of Uttarakhand, on June 21, 2013. (Manan Vatsyayana/AFP/Getty Images)
India

The Youngest Victims of the Himalayan Floods

Following flash floods that devastated the Indian Himalayan region in June, more than 1,200 children are still missing, 250,000 are out of school, and an unknown number of orphans could be vulnerable to trafficking and other trauma.

“The flash floods in Uttrakhand have had the maximum impact on children of the affected areas,” said Gargi Banerji, director of Pragya, a nongovernmental organization distributing food, hygiene kits, and clothing for children and babies. “The dislocation of communities and the shattered infrastructure post-disaster continue to expose the children to numerous risks and present a unique set of challenges for the well-being of the children in the state,” Banerji said.

Many school buildings have been destroyed or damaged, or lie in vulnerable zones. Some are being used as relief camps or distribution centers. Banerji gave the example of a primary school in Agastyamuni block that had been washed away. Its 600 students are falling behind, she said.

Although the schools were supposed to reopen on July 10, conditions still do not provide access to most schools. Aid organizations are working to quickly provide alternate facilities to minimize dropouts.

A report by Save the Children, another aid organization working on the ground, mentions Takshila High School in the same Agastyamuni area submerged in the floods. The Mandakini River now flows by the school.

India’s Union Minister for Women and Child Development, Krishna Tirath, earlier reviewed the impact of the floods on children. According to a press release by the ministry in early July, the recent floods have left many children homeless and orphaned. Tirath said in the release the government had been unable as of yet to assess how many children had been impacted.

“Almost all the children who have experienced or witnessed the flash floods and the devastation have suffered severe psychological trauma,” she added. “Many have also suffered injuries, such as bruises [and] broken limbs.”

She told the story of nine-year-old girl, Kumari Rajjita, from Syaba village. Rajjita has long suffered from recurrent fever and headaches, and had been receiving treatment in the state capital, Dehradun, since her village lacks advanced medical facilities.

“Due to the lack of road access, she can no longer travel to Dehradun for her regular health check ups. Her headaches have returned, but she does not complain and tries to put up a brave face,” she said.

Rajjita’s father treks every day to the town of Uttarkashi, or wherever he hears food and relief materials are being distributed, to collect essential supplies for the family. Sometimes he is gone for a day or two because the distribution centers are far off.

While agencies are almost finished immediate relief operations and will soon focus on long-term rehabilitation programs, there are widespread concerns that the disaster might leave orphaned or separated children vulnerable to further psychological trauma, human rights violations, and particularly, trafficking.

“Psycho-social counseling and other measures are needed to help the children deal with trauma, fear, and confusion,” Banerji said. “Development of alternate livelihoods for the families also needs to be ensured so that they can ensure food security for their children.”