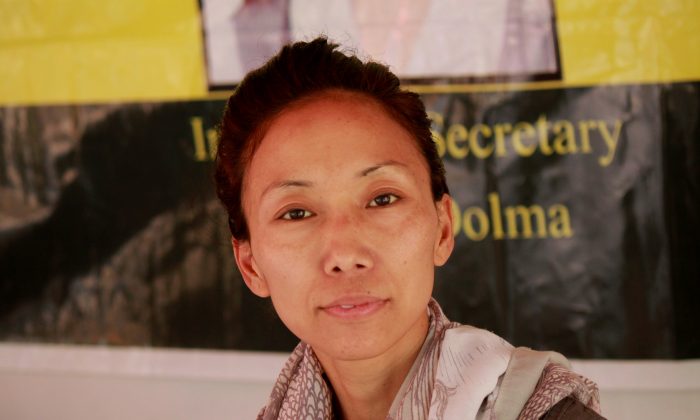 Three young Tibetans living in exile in India have started an indefinite hunger strike in an attempt to persuade the UN to hold the Chinese regime responsible for human rights violations inside Tibet. After 20 days, one of them, Tsewang Dolma, has lost nearly 9 kg but she remains determined to fight for the rights of her people.

“My hunger strike is not hard compared to the atrocities Tibetans are suffering every day under Chinese occupation,” Dolma said.

The three Tibetans – Dolma, Tamdin Hrichoe, and Tenzin Wangchuk – all members of the Tibetan Youth Congress, began their hunger strike on September 10th on a footpath on New Delhi’s Jantar Mantar Road. Supporters and curious onlookers continually drop by, take photographs on their mobile phones, have a chat, and leave. Tibetans offer khata, a traditional Tibetan ceremonial scarf, which they tie around the hunger strikers’ necks. Behind Dolma’s makeshift bed, a poster of her shows a much plumper woman, yet Dolma’s willpower is not wavering. “There’s always hope. Without sacrifice, freedom will not come to us. Self-sacrifice can bring real change,” she said.

Dolma’s father fought against the Chinese when Tibet was invaded by the People’s Liberation Army.

“He was part of the Tibetan army then. I grew up listening to stories of his courage and fight against the Chinese invasion,” Dolma said.

It was these stories that inspired Dolma and made her realise that, like her father who had given his youth to protect Tibet, she must also find a way to help.

“The Chinese have arrested all singers, artists, and our high, spiritual masters. There is so much torture but people are still protesting – individuals as well as huge protest groups. This inspires us and gives us courage. We want to give voice to the voiceless inside Tibet,” she said.

According to a press release from the Tibetan Youth Congress, the Chinese Communist Party has enforced a series of campaigns and policies to systematically stifle Tibetan culture, language, identity, and spiritual traditions, and destroy Tibet’s fragile environment, impacting the world and Asia in particular.

“Tibet today faces a life and death struggle,” the release said. According to Dolma, it is this life and death situation inside Tibet that gives Tibetan youths the courage to sacrifice and persist in their struggle against the Chinese regime.

Spreading awareness through a hunger strike is not easy. Dolma’s face looks pale and her body looks shrivelled as she struggles to be heard amid loud clatter from another protest happening nearby. But her eyes shine brightly.

“Many people think that women are weak. On the inaugural day of our protest, people who came here said that I would not be able to stay on hunger strike beyond 5-7 days. I may look skinny, but don’t judge me by that. It’s the 18th day today and I’m still good,” she said.