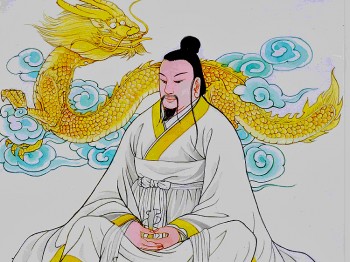 After Shen Nong the Yellow Emperor took responsibility for keeping stability for the whole territory. He led people to settle in the Yellow River Basin and changed their way of life from hunting to building houses, raising livestock, and planting crops.

During the Yellow Emperor’s reign, society was stable and culture was enriched. There were many inventions including boats, wagons, weapons, written language, music, the calendar, clothes, medicine, arithmetic, pottery, silk production, the compass, and royal dwellings. Chinese people regard the time of the Yellow Emperor as the foundation of Chinese civilization. The several emperors following the Yellow Emperor, such as Yao, Shun, Yu, and Tang were all his descendants.

According to legend, after successfully achieving enlightenment, he governed his state while also practicing alchemy and meditation. In 2598 B.C., the Yellow Emperor cast a large tripod at the foot of Mountain Bridge. As soon as the tripod was cast, Heaven opened, and the Yellow Dragon came down from Heaven to welcome him. At the time, the Yellow Emperor rode on the Yellow Dragon together with more than seventy officials—they rose up to heaven in broad daylight, having successfully achieved enlightenment.

The legend was told from generation to generation and Chinese people came to believe that at the end of a successful life, a person will rise up to Heaven. In this way, they believed their ancestors also returned to Heaven and were taken good care of. That is why the Chinese worship their ancestors at special events or festivals and in some cases they build ancestral shrines to worship together. "Respectful worship" of ancestors became a major feature of Chinese culture.