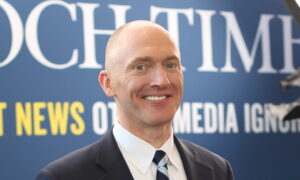 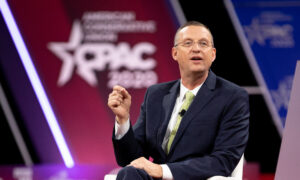 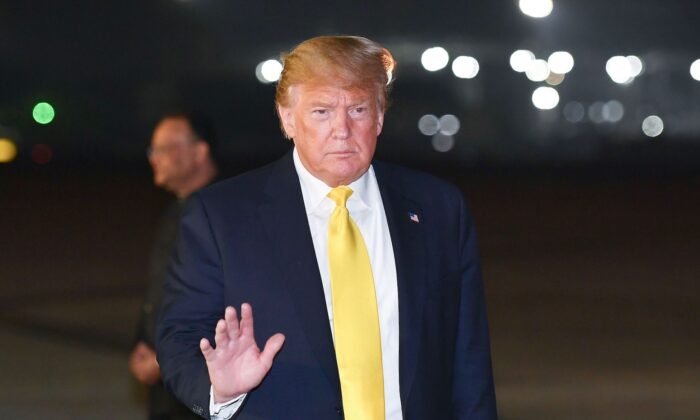 US President Donald Trump waves upon arrival at Palam Air Force Base in New Delhi on Feb. 24, 2020. (Mandel Ngan/AFP via Getty Images)
Viewpoints

The Year of Vindication: Part 1

After more than four years of relentless attacks as part of a carefully managed fraud, I believe that 2020 is the year that a number of corrupt former and present government officials begin to get their comeuppance.

It also will be the year that their victims begin to receive their public vindication, thanks to Attorney General William Barr and U.S. Attorney John Durham.

Durham has been investigating for some time now exactly how the Russiagate hoax was begun and kept in operation for so long, even months after President Donald Trump entered the White House.

As I said in my last column, it’s when Durham reveals the results of his probe that the Spygate scandal will really explode. Until now, the media has had leeway to downplay and ignore Spygate developments. That gets far harder once indictments are returned.

Based on the evidence previously made public, we already know much of what happened: Federal agencies used a fake dossier compiled by a paid former British spy and financed by the Hillary Clinton campaign to launch an unprecedented assault on the rival campaign in the 2016 election.

That assault included surveillance warrants granted through acts of fraud, as I’ll be discussing.

As those who perpetrated this fraud on the country are finally brought to justice, there will be much wailing and gnashing of teeth in the mainstream media that these “bad cops” are victims. But that will be a lie. These leakers and plotters aren’t victims. Far from it; they’re criminals.

By the end of this year, six people ensnared in this massive and growing Spygate scandal are going to have been completely vindicated.

In this first column in a multi-part series, I’ll discuss the first of the six: President Donald Trump.

Trump has insisted from the beginning that his campaign was targeted by a “witch hunt” in search of mythical Russian agents and spies who didn’t really exist. Time has proven the president to be correct.

We’re more than four years into this growing Spygate scandal and not even one American has been identified, indicted, or prosecuted by the Department of Justice (DOJ) for working with the Russians to influence the 2016 election.

Ponder that for a minute.

Even professor Joseph Mifsud, the foreign academic who was the best candidate for the role of Russian agent in the Russiagate story, has never been officially designated as such.

Special counsel Robert Mueller didn’t even say in his final report that Mifsud was acting as a Russian agent in his contacts with Trump adviser George Papadopoulos, something that Rep. Devin Nunes (R-Calif.) pointed out to him during his congressional testimony.

The second-best candidate in the Russiagate hoax for being an agent of the Russian government is, of course, Carter Page—the former Trump campaign adviser.

Didn’t the FBI swear to the Foreign Intelligence Surveillance (FISA) Court that it had evidence Page was a Russian asset? And did the FISA Court not grant the FBI a surveillance warrant to spy on Page, and renew that warrant three subsequent times?

They did. And that’s the problem.

I’ve followed this story since October 2017, and if the FBI ever had any real, verified, solid evidence that Page was a Russian agent, I’ve yet to see it.

I watched media commentators and analysts confidently pontificate for more than three years that there was simply no way the FBI could get approval for a surveillance warrant against a U.S. citizen unless good, solid, verified evidence was presented to the FISA Court.

The DOJ recently ruled that, based upon evidence presented by Inspector General Michael Horowitz in his detailed and damning FISA abuse report last December, at least two of the four warrants against Page were obtained by fraud. The other two warrants are still being reviewed.

Horowitz’s report revealed that FBI officials tampered with documents and deliberately hid exculpatory evidence from the court. So it turned out that not only was Page not a Russian agent, he was, in fact, an asset of the CIA, a fact that the CIA attempted to communicate to the FBI officials running the Crossfire Hurricane investigation.

An FBI lawyer is presently under criminal investigation for tampering with that communication.

How Can You Have Russia Scandal With No Russians?

So if Mifsud isn’t a Russian agent, and Page isn’t either, isn’t the president correct that the Russiagate investigation was a ‘witch hunt’ searching for witches that didn’t exist?

The progressive left has a cherished narrative that Trump stole the 2016 election from Hillary Clinton by cheating with Russian help. But as more time passes, all the evidence that surfaces continues to point in one direction: that this narrative isn’t true.

The truth is that Trump won that 2016 election fair and square. Russiagate was always a hoax, exactly as Trump claimed it was. That might be hard for some people to accept, but journalism is about reporting the truth, not catering to people’s feelings.

And by the end of this year, well before he’s reelected, Trump will have been completely vindicated.