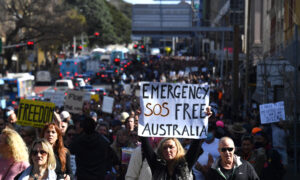 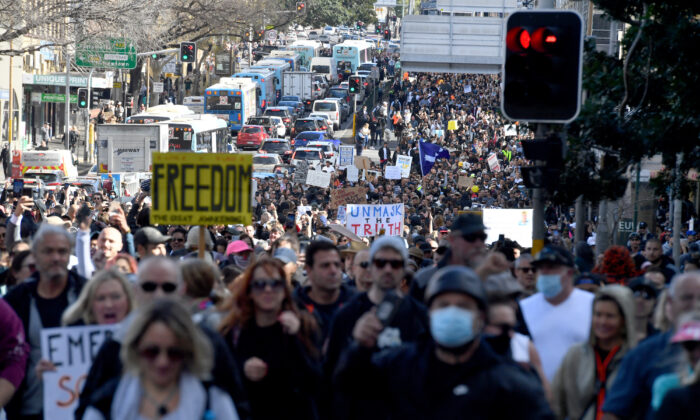 The Worldwide Rally for Freedom: An Expression of Frustration?

On July 24, 2021, protests took place against COVID restrictions—some violent—in many European and Australian cities as part of the Worldwide Rally for Freedom.

One of the rallies took place in Paris, where participants marched against a proposed law—that if the French Parliament adopted—would require people to hold either a COVID vaccination passport or negative test results when visiting restaurants and shopping centres.

Demonstrators said the laws were a draconian attempt at institutionalising discrimination against unvaccinated people.

The demonstrations were in response to the perceived breakdown of Australia’s democratic institutions, the evisceration of civil rights, the endless lockdowns and border restrictions, loss of livelihoods, harassment of the unvaccinated, compulsory face-masking, mandatory use of tracing apps, invasions of privacy, illegal use of data by police, to name a few.

Rather than being the handiwork of “anarchists,” the protests may instead be a visible expression of disempowerment and a desperate attempt to retain the erstwhile freedoms enjoyed by Australians.

This loss of personal freedom is also the main reason behind the resignation of former Premier of Queensland Campbell Newman from the Liberal National Party.

He said, “Our federal and state governments have failed to honour the spirit of individual freedom that is at the heart of not only Liberal Party values, but wider Australian values.”

The situation in Sydney is serious, where the Delta strain of COVID-19 appears unconquerable. Medical officers are even arguing for people over 60 to be vaccinated with the AstraZeneca vaccine, despite well-publicised blood-clotting issues.

Senior citizens have taken a harder stance against the officially sanctioned views of the government, particularly around vaccine choice and alternative medicines like Ivermectin.

In a recent article, Journalist Shannon Molloy argued that the anti-lockdown protestors “deserve the shame, ridicule and punishments coming their way.”

He noted that during the Second World War, people in London were told to extinguish all lights during the night to make it difficult for German bombers to find their targets. He claims the protestors would have ignored this directive and “let their lights on for the sake of freedom.”

This is an irresponsible presumption.

During the War, there was clearly a direct link between the directive to extinguish all lights during the night and its expected benefit (making it difficult for Germans to find their bombing targets).

In contrast, the periodic and unending COVID-19 restrictions, rather than being measures to restore people’s civil rights, only manage to compromise these rights further.

Also, in the War, the enemy targeted by the British government directives was well-known, whereas in the case of COVID-19, the enemy is invisible.

Molloy’s criticisms of the demonstrators are thus unnecessarily harsh, considering they have already endured 18 months of changing government health advice, the bending of civil rights, invasion of privacy, and the contentious distribution of vaccines.

George H. Sabine, in “A History of Political Theory,” argued that governments could not hold a society together by “sheer force; to that extent, there was a limited truth to the old belief that governments are produced by consent.”

This admonition is but a reminder of famous English philosopher John Locke’s well-known view that governments only govern legitimately when they have the consent of the governed.

The demonstrators clearly did not give their consent to the government.

It is also no good to argue that consent should be granted, or that the demonstrators’ should not withhold it.

Time will tell if the rallies are the beginning of a revolution in the making.

What is certain is that the need for freedom cannot be easily extinguished.

Gabriël A. Moens is emeritus professor of law at the University of Queensland and served as pro-vice-chancellor and dean of law at Murdoch University. He has published a novel about the origins of the COVID-19 disease, “A Twisted Choice,” and recently published a short story, “The Greedy Prospector” in an Anthology of short stories, The Outback (Boolarong Press, 2021).