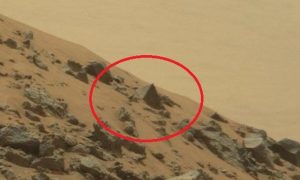 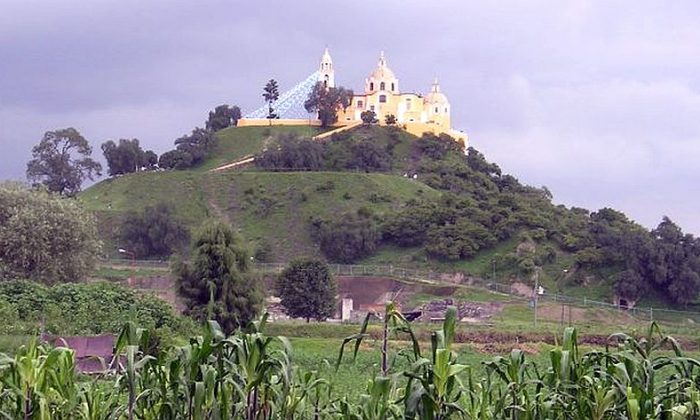 The world’s largest pyramid isn’t the Great Pyramid of Giza. It’s not even located in Egypt.

The title actually goes to the Great Pyramid of Cholula, in Puebla, Mexico. Known as “Tlachihualtepetl,” which means “artificial mountain” in Nahuatl, it was an ancient temple used by the Aztecs, but it may have been built before their civilization.

The pyramid was built in several stages, with researchers estimating its construction started in the 3rd century BC and it ended in the 9th century AD, according to David Carballo, an archaeologist at Boston University, Massachusetts, who spoke with the BBC about the monument.

The pyramid, built in Cholula, is 1,500 feet wide and more than 200 feet tall—four times larger than the Great Pyramid at Giza (which is actually taller, at 455 feet). It is actually the largest known man-made monument found so far, according to BBC. However, one wouldn’t know that it’s a pyramid at first glance—it’s covered in grass, trees, and soil, and the Spanish built a church atop it.

By the time Spanish Conquistador Hernan Cortez arrived in the Americas, the pyramid was covered by soil and heavy jungle foliage. When his forces marched into Cholula, he killed around 3,000 people and burned down part of the city—and was met with little resistance.

It wasn’t until 1910 that the pyramid was finally discovered. According to the BBC report, locals discovered it when they were trying to construct an insane asylum. Early excavations revealed human remains: bones, deformed skulls, and the deformed skeletons of children.

According to local myths, it was built by a giant.

Surrounding the pyramid was a cosmopolitan, moneyed class of people who made their fortunes on trade routes in the area. “It appears to have been multi-ethnic, with a great deal of migration,” Carballo told the BBC.

The pyramid was constructed using “adobe” bricks—made by mixing mud with other materials like sand or straw, and are then baked in the sun—and was painted black, yellow, and red. The pyramid was abandoned sometime during the 7th or 8th century.