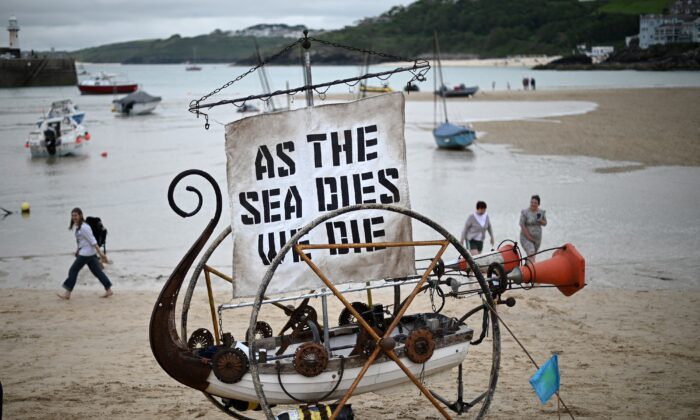 A boat sculpture is pictured during a climate change protest on the beach in St Ives, Cornwall, England, during the G7 summit on June 11, 2021. (Daniel Leal-Olivas/AFP via Getty Images)
Viewpoints

The World’s Climate Is Changing, so What Should We Do?

Earlier this month, the Intergovernmental Panel on Climate Change (IPCC) published a report stating that human-caused climate change is accelerating and that radical changes to human behavior are needed to avert disaster. U.N. Secretary General António Guterres said of the report that the “alarm bells are deafening” and the situation is a “code red for humanity.”

I hesitate to respond to U.N. statements about climate change because it’s so predictably alarmist. The “debate” between alarmists and skeptics reminds one of a shouting match between two kids: “’Tis so!” “’Tis not!” But as I wrote just a few months ago, we can’t afford to let error triumph through the technique of persistent repetition.

To anyone relatively new to this issue, there are many important truths to understand. The following are just a few:

Yes, the climate is changing. It always has and always will.

Yes, Earth is a degree or so Celsius warmer now than in the mid-1800s. This is not, by the way, the hottest the world has gotten “in over 100,000 years,” as recent media reports claim. On the contrary, according to the Greenland ice core records and other proxies, today still isn’t as warm as the Medieval Warm period 8 to 10 centuries ago, which in turn was another degree C less than the Roman Warm Period two millennia ago, which in turn was another 1.5 degrees C cooler than the Minoan Warm Period between three and four millennia ago. The salient point here is that we should be delighted about the warming since the 1800s, because that is when Earth emerged from the harsh Little Ice Age. Today’s moderately warmer climate has led to longer growing seasons and greater agricultural productivity.

Yes, carbon dioxide (CO2) in the atmosphere has increased significantly, and, yes, the human use of burning fossil fuels has augmented the increase from about 290 parts per million in the 19th century to 415 ppm today.

And contrary to claims by Guterres that deforestation is a growing problem, the CO2 enrichment of Earth’s atmosphere in recent decades has led to a planetary greening—a net addition of areas covered by vegetation that is over twice as large as Australia.

It is also important to realize that the IPCC is a political, not a scientific body (hence its name, the Intergovernmental Panel …). The political powers behind the IPCC have explicitly stated that their main goal is to transform the global economy. We should also realize that the charter that governs the IPCC explicitly grants discretionary power to the political overseers of the project to modify statements made by scientists to fit the desired political narrative and agenda. What we desperately need—especially in light of the broken peer review process (one Nobel Prize winner calls it “very distorted” and “completely corrupt,” with some asserting that published scientific research is “untrustworthy”; then there’s the corrupting influence of government money) is a separation of science and state.

With all that having been said, let us acknowledge two sobering realities: One, the climate will continue to change. Whether the temperature will be warmer or cooler in coming centuries, I don’t know and neither do the world’s climate scientists, but it definitely will change. Two, extreme weather events will continue to batter humanity periodically regardless of what the overall climate is.

So, what should we (the human race) do about climate change?

The IPCC, U.N., and progressive politicians want us to try to limit how much Earth warms by limiting human emissions of CO2. There’s a fundamental problem with this approach: We don’t know nearly enough about what causes climate change to even dream about controlling it.

The U.N. bases its recommendations on scenarios produced by computerized climate models. But the various models they use disagree with each other, and not one of them has yet come close to explaining recent past temperatures, so how could they predict future temperatures?

Also consider that by one count there have been as many as 25 occurrences of sudden global warming in the past 120,000 years, with up to 15 degrees C warming over a period of decades. Nobody knows why, but we can say definitively that those sudden changes happened with zero contribution from human fossil fuel consumption. Basically, Mother Earth is going to do what it does, and we don’t have much of a say about that.

So, here we are, flying blind, with politicians urging us to retool our lifestyles and to spend hundreds of trillions—more than $100 trillion just by 2050 to shift to non-CO2 energy sources and over $500 trillion to extract CO2 from the air—to maybe shave a few-tenths of a degree off global temperatures.

Let me propose an alternate course of action. My approach might be called “environmentalism as if people matter.” Here, the news is good, even great: Over the past century, climate-related deaths have been falling in spite of a significant increase in the world’s population. Check out this graphic from Bjorn Lomborg.

The reason for the decline in fatalities is a combination of better technology and more durable structures, both powered by increased prosperity. Instead of bleeding hundreds of trillions of dollars out of the economy in a quixotic attempt to regulate CO2, let the people keep that wealth and use part of it for greater safety.

Rather than spend hundreds of trillions of dollars in a vain attempt to regulate the climate, let’s spend some trillions over the coming decades to achieve some environmental goals that are actually attainable. Again, with “environmentalism as if people mattered” being the priority, it makes sense for us to take better care of the world’s water. Specifically, we should make serious investments in cleaning up and protecting the oceans, and also take major steps to ensure that the world’s people have enough fresh water for our growing needs.

In short, there is no reason (certainly no climate-related reason) to restructure the global economy according to some socialistic plan. As rational beings, we need to recognize the various weather-related threats that exist and to wisely prioritize which threats to combat. Addressing the world’s water-related needs is both more affordable and more achievable than some pie-in-the-sky plan to try to control Earth’s unruly, unpredictable climate.