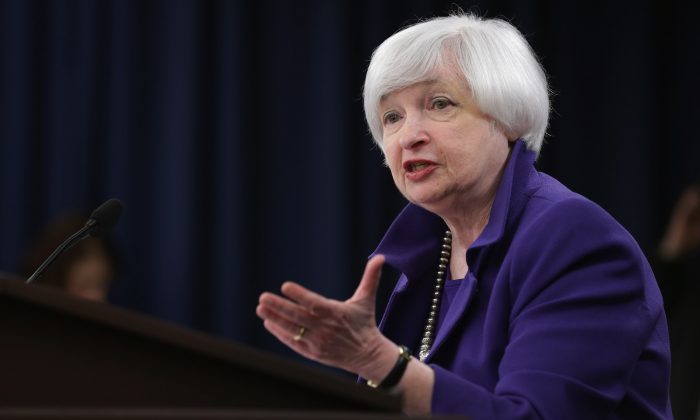 Federal Reserve Bank Chair Janet Yellen at a news conference where she announced that the Fed would raise its benchmark interest rate for the first time since 2008, at the bank's Wilson Conference Center in Washington, D.C., on Dec. 16, 2015. (Chip Somodevilla/Getty Images)
Business & Economy

NEW HAVEN—The Fed’s end-of-year decision to raise the interest rate was presented as the “normalization” of monetary policy and the end of the era of the 2007–2008 financial crisis. Ending seven years of loose monetary policy will not only shape U.S. financial markets, but will have profound effects on economies and even politics across the world. Emerging markets, increasingly dependent on the flood of investment fleeing the United States, will face challenges as the higher interest rates may make them less attractive for foreign investors.

In the eyes of the U.S. Federal Reserve, the financial crisis is over. After a year marked by great uncertainty about future monetary policy, the Fed hiked its headline interest rate by 0.25 percent in December. That decision put an end to seven years of loose monetary policy, during which the Fed sought to counteract the financial crisis and subsequent recession by traditional means such as interest-rate cuts and untraditional means, such as buying financial assets, a policy known as quantitative easing. Market prices suggest the Fed will increase interest rates by a total of 1 percent during 2016.

In the eyes of the U.S. Federal Reserve, the financial crisis is over.

Since September 2007, the Federal Reserve deliberately pushed down interest rates in an attempt to boost consumption and investment. The Fed was broadly successful stimulating consumption, though economists still debate the effects of more debt on the broader economy. Mortgage rates after the crisis were one to two percentage points lower than before the Fed’s rate cuts, while corporate bond yields fell by a similar amount.

The most obvious effect of the Fed’s rate hike is to reverse this process. Costs of consumer lending such as mortgages and car loans, for example, have already edged upward, with mortgages above 4 percent for the first time in half a year. More expensive loans will discourage consumption of houses, cars, and goods purchased with credit cards—one reason why some economists fear that higher interest rates will damage the economy.

Federal Reserve Chair Janet Yellen has repeatedly referred to rate hikes as a process of ‘normalization.’

The Fed is wagering that small increases in borrowing costs pose a negligible effect on consumer spending and investment. The possible downside is outweighed by two positives, according to the Fed: First, by underscoring the Fed’s willingness to hike rates, the decision will make an uptick in inflation less likely. Little inflation has been visible so far—indeed, inflation for the United States and other developed economies has generally been well below the 2 percent target. But some fear that as the economy continues to heal, inflation could return. Nonzero interest rates help hedge against that risk. The second perceived benefit of a rate hike is signaling that, despite the tremendous policy experiments of the last several years, the Fed intends to return to its previous policy as the economy recovers. Federal Reserve Chair Janet Yellen has repeatedly referred to rate hikes as a process of “normalization.”

The effects of the Fed’s decision are much broader than these two factors. Higher borrowing costs will percolate through the U.S. economy, with significant effects on markets for many financial assets. One reason is that the policy of quantitative easing, expanding the Federal Reserve’s balance sheet by purchasing financial assets, has transformed the Fed’s relationship with financial markets. The central bank has long acted as a “lender of last resort,” lending to banks in times of panic. Since 2008, however, the central bank has turned into a buyer of last resort, wading into markets such as mortgage-backed securities to provide liquidity, and the Federal Reserve now owns a significant share of outstanding U.S. mortgage-backed securities.

Why the Fed Is No Longer Center of the Financial Universe

Quantitative easing drove up asset prices—true in markets in which the Fed was a direct purchaser, such as U.S. government debt and mortgage-backed securities issued by housing agencies Fannie May and Freddie Mac. The effect was felt even in equity markets, though the Fed did not purchase equities, simply because the flood of new money was so large.

Because the rate hikes signal the definitive winding down of quantitative easing, they will have a negative effect on the price of many assets. Already, the market for high-yield corporate debt is under pressure as market participants worry how the end of rock-bottom interest rates will curb that sector.

As higher interest rates spread through the U.S. economy, they will affect other countries, too.

As higher interest rates spread through the U.S. economy, they will affect other countries, too. One main transmission channel is a growing differential between the United States and other developed economies. The central banks of the United Kingdom, Japan, and the eurozone also have extremely low interest rates and quantitative easing programs. The U.K. is anticipated to follow the U.S. lead, but Japan and Europe could resist tightening monetary policy in 2016. If so, higher U.S. interest rates will lead to increased demand for American assets. That will push the value of the dollar higher against these currencies. Indeed, the dollar already rose in 2015 as investors anticipated this interest rate differential.

For Japan, the U.K., and Europe, a stronger dollar might be welcome, since it should boost their exports by making them relatively more affordable. Less developed countries, however, have more to fear from higher U.S. interest rates. The past decade has seen a record flood of money from developed countries into emerging markets, funding investment and consumption in countries as varied as Turkey, India, Russia, and Brazil.

The boom in foreign funding of emerging markets was caused by many factors, including these countries’ high growth rates and the recession in developed markets. Low interest rates in developed countries played a key role, too. On the one hand, it made investment in the United States relatively less attractive, since returns were lower. On the other, quantitative easing expanded liquidity, encouraging investment in riskier emerging market assets.

Many investors fear that the emerging markets have become too dependent on loose U.S. monetary policy.

Many investors fear that this has left emerging markets dependent on loose U.S. monetary policy. In 2013, when the Fed announced plans to “taper” quantitative easing programs, an announcement intended to begin the process of unwinding the unconventional monetary policy, many investors began pulling out of emerging markets that depended on foreign financing. In what became known as the “taper tantrum,” investors dumped assets from countries such as Turkey, Brazil, Indonesia, and South Africa. These countries were running current account deficits; higher rates meant that the cost of financing these deficits by foreign borrowing was about to increase. In the 12 months from March 2013, the currencies of each of these countries lost roughly 20 percent of their value against the dollar.

Plummeting currencies simply compounded these countries’ problems. Many of their firms had borrowed dollars, but made most of their revenue in local currency. Borrowing in dollars was attractive because of the low interest rates, but when the dollar rose against the local currency, this made servicing debt relatively more expensive. The result, many investors feared, was that these countries stood on the brink of a dangerous downward spiral. In 2013, only the prospect of further easing from the Federal Reserve pulled these markets back from the brink.

As the Federal Reserve tightens monetary policy, investors are again keeping a careful eye on the effects of higher rates not only on the U.S. economy, but on far-flung emerging markets. The countries most affected by U.S. monetary policy have no say over its formulation. In the words of former U.S. Treasury Secretary John Connally, the dollar is “our currency, but your problem.”

Chris Miller is associate director of the Grand Strategy Program at Yale and a fellow at the Foreign Policy Research Institute. He is currently finishing a book manuscript on Russian-Chinese relations. Copyright © 2015 YaleGlobal and the MacMillan Center. This article was previously published on Yaleglobal.yale.edu