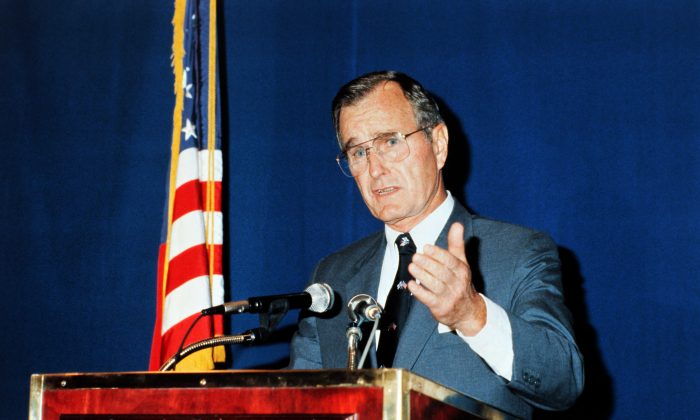 A generation later, George H.W. Bush’s many presidential speeches about the “new world order” are especially striking for a naive-sounding but rigidly ideological outlook with origins on the Utopian and Marxist left.

He saw what he wanted to see, and tried to use his awesome powers to force his “vision thing” into being. He didn’t succeed. No one does. What such “seers” do, however, is enable the tricksters, frauds, and villains of the world to advance. We might start with former President Bill Clinton.

What accounts for Bush’s posthumous popularity in the news media that shook off his presidency like a Reagan hangover? Republican or not, George H.W. Bush, like George W. Bush, is now, in the Trump era, recognized as one of them—the internationalists, the globalists, the believers in a “new world order,” or “liberal world order,” or “post-World War II order,” all threatened to their communist foundations (literally, at the United Nations and International Monetary Fund, which were fostered into existence by Soviet agents Alger Hiss and Harry Dexter White) by the advent of President Donald Trump’s “America First” victory.

Whereas the wider left once had the luxury of railing against Bush on certain “social” issues, today they lock shields around him as an essential ally against We, the Deplorables, who were stirred for the first time to victorious action in 2016 by Trump and would like nothing better than to restore our democratic republic.

Not “New World Order” Bush. Indeed, as we’ll see, George H.W. Bush not only renounced George Washington’s famous warning against “entangling alliances,” he believed these alliances to be “essential.”

Essential to what? After a century’s attrition, we may see that all too many of these entangling alliances, from detrimental trade agreements to treaties at odds with our Constitution, to costly wars and military occupations, have undermined the strength and protections of our nation, including our sovereignty and Constitution.

This isn’t to suggest that all trade, treaties, and interventions pose existential peril; however, there is such peril in entanglements that are designed or exploited to strengthen globalism and diminish the nation-state.

Here are some excerpts from the speeches of the 41st president.

“We stand today at a unique and extraordinary moment. The crisis in the Persian Gulf, as grave as it is, also offers a rare opportunity to move toward an historic period of cooperation.”

As I learned in writing “American Betrayal,” beware leaders who see “opportunity” in war.

“Out of these troubled times, our fifth objective—a new world order—can emerge: a new era—freer from the threat of terror, stronger in the pursuit of justice, and more secure in the quest for peace. An era in which the nations of the world, East and West, North and South, can prosper and live in harmony.”

Did he really believe this?

“A hundred generations have searched for this elusive path to peace, while a thousand wars raged across the span of human endeavor. Today, that new world is struggling to be born, a world quite different from the one we’ve known. A world where the rule of law supplants the rule of the jungle. A world in which nations recognize the shared responsibility for freedom and justice. A world where the strong respect the rights of the weak. This is the vision that I shared with President [Mikhail] Gorbachev in Helsinki. He and other leaders from Europe, the Gulf, and around the world understand that how we manage this crisis today could shape the future for generations to come.”

How Gorbachev must have laughed.

“In the final analysis, our ability to meet our responsibilities abroad depends upon political will and consensus at home. This is never easy in democracies, for we govern only with the consent of the governed.”

Darn that will of the people stuff … Bush will return to these unfortunate (to him) constraints again.

“And although free people in a free society are bound to have their differences, Americans traditionally come together in times of adversity and challenge. Once again, Americans have stepped forward to share a tearful goodbye with their families before leaving for a strange and distant shore. At this very moment, they serve together with Arabs, Europeans, Asians, and Africans in defense of principle and the dream of a new world order.”

Utopians should never command armies, because men should never be asked to die for a “dream” of anything, and especially not a “new world order” in which their own nation, the one whose uniform they put on, is fated to disappear.

“Much has changed over the last two years. The Soviet Union has taken many dramatic and important steps to participate fully in the community of nations.”

Such as disband its espionage armies waging wars of destabilization? Nope.

“And when the Soviet Union agreed with so many of us here in the United Nations to condemn the aggression of Iraq, there could be no doubt—no doubt then—that we had, indeed, put four decades of history behind us.”

“We are hopeful that the machinery of the United Nations will no longer be frozen by the divisions that plagued us during the Cold War, that at last—long last—we can build new bridges and tear down old walls, that at long last we will be able to build a new world based on an event for which we have all hoped: an end to the Cold War.”

Glory be the U.N. This, too, is another theme in Bush’s rhetoric.

“The United Nations can help bring about a new day, a day when these kinds of terrible weapons and the terrible despots who would use them are both a thing of the past. It is in our hands to leave these dark machines behind, in the Dark Ages where they belong, and to press forward to cap a historic movement towards a new world order and a long era of peace.”

“This is an historic moment. We have in this past year made great progress in ending the long era of conflict and Cold War. We have before us the opportunity to forge for ourselves and for future generations a new world order—a world where the rule of law, not the law of the jungle, governs the conduct of nations. When we are successful—and we will be—we have a real chance at this new world order, an order in which a credible United Nations can use its peacekeeping role to fulfill the promise and vision of the U.N.’s founders.”

Note: At the U.N.’s charter conference in 1945, the secretary-general was Soviet agent Alger Hiss, who, while wearing his disguise as a U.S. State Department official, was instrumental in the creation of this first “world body.”

March 6, 1991: Address Before Joint Session of Congress on the End of Gulf War

“Now, we can see a new world coming into view. A world in which there is the very real prospect of a new world order. In the words of Winston Churchill, a world order in which ‘the principles of justice and fair play protect the weak against the strong.’ … A world where the United Nations, freed from Cold War stalemate, is poised to fulfill the historic vision of its founders. A world in which freedom and respect for human rights find a home among all nations. The Gulf War put this new world to its first test. And my fellow Americans, we passed that test.

“Tonight, as our troops begin to come home, let us recognize that the hard work of freedom still calls us forward. We’ve learned the hard lessons of history. The victory over Iraq was not waged as ‘a war to end all wars.’ Even the new world order cannot guarantee an era of perpetual peace. But enduring peace must be our mission.”

“Our objective must be to exploit the unparalleled opportunity presented by the Cold War’s end to work toward transforming this new world into a new world order, one of governments that are democratic, tolerant, and economically free at home and committed abroad to settling inevitable differences peacefully, without the threat or use of force.

“Unfortunately, not everyone subscribes to these principles. We continue to see leaders bent on denying fundamental human rights and seizing territory regardless of the human cost. No, an international society, one more attuned to the enduring principles that have made this country a beacon of hope for so many for so long, will not just emerge on its own. It’s got to be built.

“Two hundred years ago, another departing president warned of the dangers of what he described as ‘entangling alliances.’ His was the right course for a new nation at that point in history. But what was ‘entangling’ in Washington’s day is now essential. This is why, at Texas A&M a few weeks ago, I spoke of the folly of isolationism and of the importance, morally, economically, and strategically, of the United States remaining involved in world affairs. We must engage ourselves if a new world order, one more compatible with our values and congenial to our interest, is to emerge. But even more, we must lead. …

“No, the United States should not seek to be the world’s policeman.”

“There is no support abroad or at home for us to play this role, nor should there be. We would exhaust ourselves in the process, wasting precious resources needed to address those problems at home and abroad that we cannot afford to ignore.

“But in the wake of the Cold War, in a world where we are the only remaining superpower, it is the role of the United States to marshal its moral and material resources to promote a democratic peace. It is our responsibility, it is our opportunity to lead. There is no one else.

“Leadership cannot be simply asserted or demanded. It must be demonstrated. Leadership requires formulating worthy goals, persuading others of their virtue, and contributing one’s share of the common effort and then some. Leadership takes time. It takes patience. It takes work.”

It is exactly such “leadership” that would lead the United States into the bloody, costly defeats in Iraq and Afghanistan under the 41st president’s successors, George W. Bush and Barack Obama. Trump ran directly against such “leadership” and won, but has yet to halt the pointless loss of U.S. life in Afghanistan by bringing our remaining forces home.

“Some of this work must take place here at home. Congress does have a constitutional role to play. Leadership therefore also involves working with the Congress and the American people to provide the essential domestic underpinning if U.S. military commitments are to be sustainable.”

It’s nice to see the executive branch acknowledge its co-equal; however, the way Bush phrased it, Congress doesn’t sound so co-equal. It is one of those unspoken truths: The will of the people—We, the People—isn’t a feature of any “world order,” new or otherwise.

Something to think about as the nation lays its 41st president to rest.