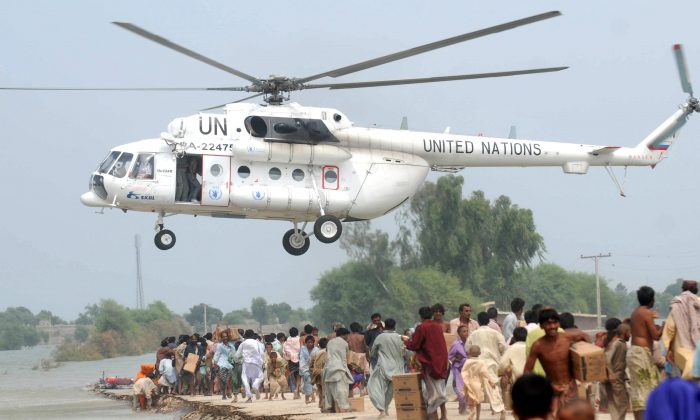 The World Needs a More Innovative Approach to Humanitarian Relief

This has been a difficult year for humanitarian relief. Huge events have left indelible images. From a dead Syrian child washed up on a Turkish beach, to villagers trapped under rubble after earthquakes in Nepal, and grieving families of Ebola victims in West Africa.

The tragic stories have tumbled in, transmitted around the world by 24-hour news channels and social media. Natural disasters and man-made conflicts have combined to produce a staccato rhythm of drama and horror packaged as one-off events—no matter how often they may re-occur. And so, our responses are piecemeal: When our awareness is pricked there are spikes in relief funding, donations, and volunteer efforts.

The job of compiling the detailed quantitative data falls to OCHA, the United Nations Office for Coordination of Humanitarian Affairs, which undertakes this effort on an annual basis. And its latest report makes sobering reading.

Overall, a staggering 200.5 million people have been affected by natural disasters or displaced by conflicts in 2015—an increase of more than 50 million from the previous year. These figures include those who escaped disasters and crises from previous years but for whom humanitarian assistance is still essential. But immediate, conflict-driven emergencies displaced 59.5 million people—the equivalent of 30,000 people every day. A further 19.3 million people were displaced by natural weather-related crises.

The costs of responding to these crises have increased six-fold, from $3.4 billion just a decade ago to more than $20 billion today. The funding gap between the sums required to provide basic humanitarian needs and the amount raised through international appeals is also rapidly growing, and the shortfall currently is a staggering 40 percent (about $7 billion). According to OCHA, the full economic cost of lost income and growth from global conflict is estimated to be more than $14 trillion.

On a more encouraging note, the U.N. report identified a number of innovative responses to challenges. Take, for example, the problem of getting reliable data—a crucial asset in managing any response. In West Africa, the Independent Standby Task Force, a global network of volunteers, has organized an online network of people to compile and disseminate information on available health care facilities after disasters.

Another approach has emerged in OCHA’s Humanitarian Data Team in Nairobi, which has started a data lab to offer services to partners and collate information from across East Africa. Even something as simple as a Skype group has had an important impact on data-gathering from different agencies across multiple regions.

However, high-profile humanitarian failures in Rwanda, Haiti, and the areas affected by the Indian Ocean tsunami indicate that there is still a long way to go if innovation is to play a central role in improving aid effectiveness.

Recent reports by the Centre for Research in Innovation Management (CENTRIM) at the University of Brighton indicate that the humanitarian sector is being starved of the funding that would enable it to come up with new ways of addressing problems. Well under 1 percent of the sector’s turnover is being invested in innovation, compared to the 2 percent to 7 percent that one would expect to find in commercial sectors of the economy. There are limited resources for discovering new and better ways of doing things—and substantially less for actually turning ideas into viable, tested, and scaled-up approaches.

One of the Brighton studies shows that the problem isn’t just about money; there are obstacles at almost every stage of the process, from the search for new ideas to enabling their widespread application. What innovation there is tends to be incremental in nature: doing things a little bit better rather than doing them differently. Necessity means that there is also a great deal of ad hoc improvisation taking place.

The short-term nature of humanitarian deployment means that few innovative ideas are ever ‘captured’ and used again as best (or better) practice.

However, the short-term nature of humanitarian deployment means that few such ideas are ever “captured” and used again as best (or better) practice. The sheer number and scale of disasters documented in the OCHA report means that there is little time for continuous and cumulative learning—the bedrock of innovation that actually works.

Very few examples of more radical innovation can be found, and those that exist have often taken decades to become established practice. One example is cash programming, whereby food-aid is replaced by cash. Many also require mavericks, who tend to have to swim hard against the tide of received practice to get new ideas accepted. (The use of ready-to-use therapeutic foods like the Plumpy’Nut paste used to treat child malnutrition, is a case in point.)

This tendency toward minor improvements is deeply rooted. Innovation has been equated with experimentation, and this flies in the face of a devoted adherence to the tenet of “doing no harm” to individuals and communities already suffering abject misery.

Innovation is simply seen as too risky when there are lives at stake. This is sometimes compounded by contractual relationships between donors and those responsible for implementation. Donors require certainty of what will be done and how it will be accomplished. The fallback position is therefore one of acceptance of the status quo and a lack of incentive to question whether humanitarian responses might be achieved differently.

We can be hopeful, though, that changes might be made. The organizers of the World Humanitarian Summit that will take place in Istanbul in May 2016 have embraced innovation as one of its underlying themes. Perhaps the apparent success of the recent Global Climate Change Conference in Paris will provide the fresh impetus and political will to bring smarter thinking to humanitarian challenges.

Howard Rush is a professor of innovation management at the University of Brighton in the U.K. This article was previously published on TheConversation.com.