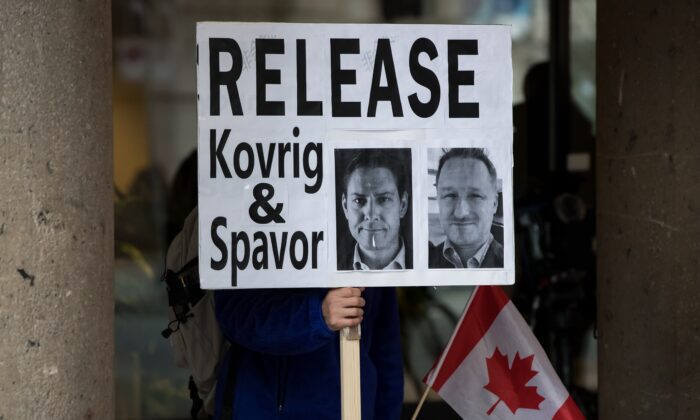 A man holds a sign bearing photographs of Michael Kovrig and Michael Spavor, who have been detained in China for more than a year, outside B.C. Supreme Court where Huawei chief financial officer Meng Wanzhou was attending a hearing, in Vancouver on Jan. 21, 2020. (Darryl Dyck/The Canadian Press)
Canada

‘The World Is Watching You,’ Garneau Tells Chinese Regime

Foreign Affairs Minister Marc Garneau is urging the Chinese regime to abandon its practices of arbitrary detention of foreign citizens and human rights abuses against Uyghurs in Xinjiang.

“The message is that the world is watching you,” Garneau said during an interview with CBC News on Monday.

“We’ve made our position very clear, crystal clear, to China. And the eyes of the world are watching China on arbitrary detention as well as on human rights violations.”

The government announced sanctions Monday against four Chinese officials and one state-run organization accused of participating in the abuse of Uyghurs and other ethnic Muslims in Xinjiang Uyghur Autonomous Region.

The sanctions would freeze all assets that the listed individuals have in Canada, and Canadian citizens and business are banned from “providing financial or related services to them.” The four individuals are also denied entry to Canada.

“In this particular case we are sending a message that we are deeply preoccupied with human rights in the Xinjiang region and that we continue to demand that China allow unfettered access to examine the situation. And more and more countries are joining us in this,” Garneau said.

He said the sanctions are a follow-up of measures in January to prevent the risk of goods produced by forced labour in any country from entering Canadian and global supply chains.

The United States, United Kingdom, and European Union have imposed similar sanctions, in concert with Canada.

“More and more countries are going to be looking at these human rights violations as we build momentum,” Garneau said.

In the CBC interview, Garneau also warned countries to pay attention to the risk that their citizens may be arbitrarily detained by Beijing.

“My advice to all other countries in the world is, if you are doing business with China and you have citizens of your country in China, and you have disagreements with them, there is the possibility that your citizens could be detained,” he said.

Canadian citizens Michael Kovrig and Michael Spavor were arbitrarly detained in China in December 2018, shortly after Canada arrested Huawei Chief Financial Officer Meng Wanzhou in Vancouver at the behest of the U.S. government.

Spavor was put on trial on March 19, while Kovrig was tried on Monday. Consular access to the court hearings was denied.

Garneau said diplomats from at least 23 countries had gathered outside Beijing’s No. 2 Intermediate Court, where Kovrig was tried.

“That’s another demonstration of how multilateral co-operation is beginning to get the message across,” he said.

Garneau said that while Canadian consular officials were denied participation in both trials, China has indicated that consular access would be provided to both men before the end of March. “And we will be pushing for that, ” he said.

Meng, who is under house arrest at one of her Vancouver mansions while her case is being heard, is accused of bank fraud and conspiracy to mislead HSBC and other financial institutions to breach U.S. sanctions against Iran.