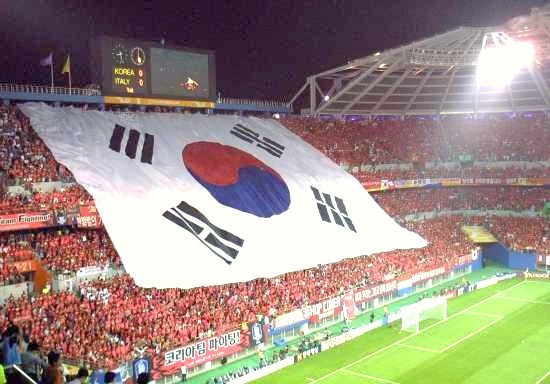 The World Cup and Sports Diplomacy in East Asia

I’m always amazed by how the World Cup has become a major part of modern life and captures a global audience. The power of soccer — or global sporting events in general — astounds me. People from drastically different nations put away their differences to enjoy the games. And besides being really fun to watch, global sporting events can be effective at building long-lasting diplomatic relationships between countries, which some call “sports diplomacy.”

Countries can employ sports as an indirect means to foreign policy ends, as the image of a state’s foreign policy can change from hermetic and irrelevant to one that is innovative, effective and inviting. The expressions of hard power through diplomacy based on traditional, high politics of border demarcation, arms treaties, or alliances don’t hold the attention among the public (because they are super boring). On the other hand, virtually all cultures and all citizens have an interest in and appreciation for sports. That’s why global sporting events are a great methods for diplomatic operations.

If the diplomatic posture and message is crafted and aligned to the positive values of sports, the perceptions of a foreign country can be significantly altered. There is a reason why countries have used the Olympics – Japan in 1964, South Korea in 1988, and China in 2008 – as a coming out party to show the world how it is a rising, modern, economic power house. And Brazil is attempting to use the 2014 World Cup (and the upcoming 2016 Olympics) to build its image as the South American regional leader.

Sports can be used as a diplomatic tool to begin meaningful conversations between two countries that have a weak or non-existent relationship. “Sports diplomacy” can be used as a “soft” way of exploring or signaling a foreign policy shift between two estranged nations. As an example of this, everyone always points to the 1971 case of Ping-Pong Diplomacy, which spurred Nixon’s opening to China.

Sports, however, are not a sufficient condition on its own to create a breakthrough in diplomacy.  I will explore this idea with two different examples. One in which a sporting event led to a diplomatic breakthrough (ROK-Russia; 1988 Seoul Olympics). And one in which the event was not enough to strengthen diplomatic relations (ROK-Japan; 2002 World Cup).

The establishment of diplomatic relations between South Korea and the Soviet Union in 1990 was widely seen as a breakthrough step in ending the Cold War in Asia. Seoul used sports as a diplomatic tool in the Roh Tae Woo’ government’s “northern policy,” a strategy with the end result of normalizing relations with communist nations on the basis of pragmatism and economic benefits, not based on ideology.

The strategy’s objective of normalizing relations with the Soviet Union was by no means an easy task. Seoul and Moscow had a history of mutual hostility and non-dialogue. Because of the Soviet-North Korea defense treaty, tens of millions of dollars in Soviet aid, and ideological support for Pyongyang, Moscow was seen by Seoul as the largest supporter of the North Korean government. Similarly, the Soviets saw South Korea as a way for the US to spread its ground, air, and naval forces in the region.

South Korean officials began using the 1988 Olympics as their “northern policy” strategy as early as 1984. Despite the fact that Soviet Union officials boycotted the 1984 Los Angeles games, some representatives of the Soviet sports ministry were still in attendance.  During the 1984 games, South Korean officials approached their Soviet counterparts, and explained how the upcoming 1988 Seoul Olympics could be a way to ease South Korean big business conglomerates into entering the Soviet market with trade and investment.

Officials in Seoul were worried that Moscow would boycott their games, just as they had the games in LA. As a political gesture intended to promote a level of trust, Seoul offered to allow a Soviet ship to dock at Incheon port for the duration of the Seoul Games if Moscow preferred its delegation to not stay on-land in Seoul.

The first indicator of the success of the ROK’s sports engagement strategy came in 1986 when the government succeeded in bringing 30 Eastern European countries and the Soviets to a preparatory meeting of the Seoul Games. Once the Soviets agreed to participate in the games, the ROK government tirelessly built as much goodwill as they could.

In the end, the Soviet Union sent over 6,000 athletes and tourists to the Games. The success in using sports to facilitate their diplomatic strategy was seen in the diplomatic activity following the games. In September 1988, Gorbachev declared at Krasnoyarsk that he intended to improve relations with the ROK. This declaration was followed by a number of economic contracts and political meetings between the nations from 1988 to 1990. The contracts led to the opening of trade offices by South Korean government-backed Korea Trade Promotion Association and the Soviet chamber of commerce in the summer of 1989. The following summer the contracts were concluded at the highest level in San Francisco. President Roh and Gorbachev held the first South Korea – Soviet Union summit in post-World War II history and agreed that they would work towards establishing formal relations. Formal relations were established in September 1990.

The 2002 World Cup, held in South Korea and Japan, seemed like the diplomatic opportunity of a lifetime on paper. Relations between the two countries had always been superficial, as they were basically forced to become allies because of their strong ties to the US and the fact that they are the most developed democracies in East Asia. Leading up to the World Cup, relations had been fledgling as a result of Prime Minister Koizumi’s desire to revise history textbooks and visit to the Yasukuni Shrine in 2001.

Unfortunately, in terms of Japan-ROK bilateral relations, the Cup had little positive impact. As former Director for Asian Affairs in the White House’s National Security Council Victor Cha notes, “it didn’t help relations, but did not hurt them either.”

“Leading up to the World Cup, the two countries competed so vigorously for the rights to host that they frightened FIFA officials into choosing neither solely,” explains Cha. “Then after that, they virtually ignored each other as co-hosts.”

Although there were no major breakthroughs, Seoul and Tokyo were able to make some small progress. They signed a long-overdue extradition treaty, which requires both countries to extradite any nationals involved in serious criminal activity. But besides this treaty (which should have been signed in the 1990s), the Cup saw no tangible diplomatic progress.

Why did the 1988 Seoul Olympics succeed and the 2002 World Cup fail? A lot of it has to do with the existing relationships. Japan and South Korea already had normal relations when the 2002 World Cup came around. Although the two countries had its differences, they had well established economic ties. Soccer games weren’t going to suddenly resolve hundreds of years of deep-rooted historic and cultural disagreements.

South Korea and the Soviet Union literally had no diplomatic relationship; so all the two countries needed was an impetus to get things moving. The 1988 Olympic Games were the perfect way to open relations between Seoul and Moscow. The Olympics didn’t lead to normal diplomatic relations overnight. There were years of meetings, dialogues, and negotiations before the Roh and Gorbachev sat down in a room together. But the Olympics started the conversation between the two countries.

It will be interesting to see how the world remembers the 2014 World Cup in Brazil, and whether it will lead to any diplomatic breakthroughs. But the way things are going, I don’t think the world is all that impressed.