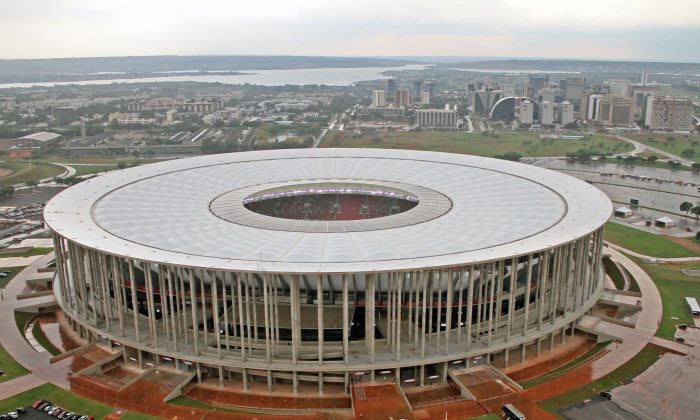 An aerial view of the Mane Garrincha Stadium in Brasilia. The stadium sits among many sports structures that are crumbling due to neglect. (Courtesy of FIFA)
Americas

The World Cup and Failed Promises in Brazil’s Capital

BRASILIA, Brazil—Despite early worries about strikes, protests, and unfinished venues, the 2014 World Cup matches in Brazil have gone on largely without disruption.

While many may have put their protests on poor city infrastructure, transportation systems, and other concerns on hold as their national team pursues a sixth World Cup, objections over government spending and priorities will likely dog authorities for a long time once the tournament is over.

“They spend a fortune in a stadium like Mane Garrincha while tired workers have to wait a long time for a bus, and then we have to stand until we get home,” said Elane dos Santos, a resident of the Brazilian capital of Brasilia.

According to a study released in February by the National Confederation of Transport, an association of Brazilian transporters, over 80 percent of Brazilians believe funds spent on multimillion-dollar stadiums should have gone to “improve more important areas” such as health care and education.

While still Brazil’s sports minister, Orlando Silva declared in 2011, “We have a great opportunity to execute investment plans to improve quality of services in the large cities, especially public transportation.”

Silva’s promise was embedded in the government’s 2010 detailed World Cup investment plans. Close to US$5.5 billion was set aside for urban mobility projects.

However, according to Gil Castello Branco, president of Contas Abertas, a nonprofit organization informing the public about government expenditures, the funding allocation dropped to US$3.6 billion, and so far only US$1.45 billion has been used.

Investments by Brasilia’s district government (GDF) mirrored the national trend. While many residents are pleased with the improvements made to some of the infrastructure, such as the city’s airport, many object to the high costs spent on the stadiums.

Alessandra Minadakis Barbosa, a federal attorney from Goiania, flies frequently to Brasilia. Last time, when she flew in just a few days before the games, she was surprised to see that the revitalization work in airport was completed just in time for the World Cup.

“I didn’t think it was going to be ready on time,” Barbosa said, “but it really worked. It’s better than I imagined.”

After 17 months of construction and US$543 million in costs, the airport boasts two new airport terminals, 16 new gates, and an increase in annual passenger capacity from around 16 million to around 25 million.

There are also more ticketing counters, aircraft space, and luggage conveyor belts created at the airport, and the number of parking spots has doubled.

“The airport used to be too small for the number of people; it was very busy,” Barbosa said. “It’s much better now.”

Many Brazilians are also happy with the world-class stadiums built or rebuilt for the tournament.

Talita Costa, a veterinarian, was among the thousands of Brazilians who attended the game between Brazil and Cameroon on June 23.

“The stadium was beautiful,” Costa said, adding that, with the great number of food shops available in the stadium, she is pleased with the service offered to the spectators.

FIFA usually requires stadiums hosting the World Cup’s championship to have a capacity of 60,000 or more. However, Brasilia’s beautifully revamped stadium is not hosting the final. And at US$633 million, it was the most expensive of the 12 stadiums prepared for the games.

According to a report presented by Tribunal de Contas do Distrito Federal—the institution monitoring public spending—that price-tag might exceed US$860 million due to overbilling and irregularities such as errors in calculating transportation costs, improper material purchases, and building delay fines.

GDF, which financed the stadium, disputes the findings, saying that costs could in fact decrease to US$543 through tax breaks allowed by the federal government for stadium construction.

And Agnelo Queiroz, governor of the GDF, adds the new stadium was needed to host large-scale events, according to Portal 2014, a Web-based journal by the Architecture and Engineering Union providing information about the World Cup.

Contas Abertas’s Branco argues that even so, for a city without a major league soccer team, the stadium will be largely unused.

The stadium has already hosted a number of games of the Brasileirão, Brazil’s main soccer league.

The games commonly attracted around 35,000 spectators, with the exception of a game in late May where over 63,000 people attended—still thousands shy of the maximum capacity. The money earned by the GDF for this game through rental income was around US$2,000.

With such returns seen so far in comparison to the high cost of the project, residents wonder if the sacrifice was worth it.

“A stadium [costing] in the billions [reals, equivalent to hundreds of millions of dollars] was not a priority for Brasilia,” Branco said in an email.

“The cost of building the Mane Garrincha was practically the same as the amount invested by Brasilia’s government in all sectors—education, health care, transportation, public security, etc.—during all of 2013.”

The GDF did not return a request for comments.

Incidentally, the honor of hosting the final has been bestowed to Rio’s Maracana, which seats nearly 80,000.

Originally planned in 2009 and meant to be in service before the World Cup games, Brasilia’s first light rail transit (LRT) system was intended to link the city’s airport to downtown, cutting commute time for travelers significantly.

But plans were halted in 2011 due to bidding fraud allegations. Resulting delays meant the LRT would not be ready for the World Cup, so in 2012 the US$354 million project was canceled.

The LRT project was added to a list of other canceled projects that the government intends to revisit, collectively termed PAC.

While GDF claims it has completed 40 percent of an overpass needed for the LRT, there is no official projection for when the LRT will be in service.

Angelica Meira Costa is a native of Brasilia. After moving to Canada in 2008, she often visits the city, where her family still lives.