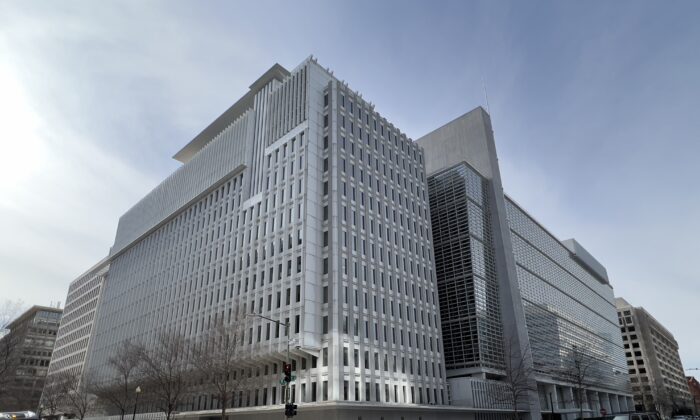 The headquarters of the World Bank in Washington, D.C., on Jan. 19, 2022. (Daniel Slim/AFP via Getty Images)
Viewpoints

The World Bank and the Funding of Genocide

The Bretton Woods Agreement came into effect in 1944, laying the foundations for a new international monetary system. With the agreement came the creation of two new organizations.

Fast forward almost 80 years, and both the World Bank and the IMF find themselves mired in controversy and heavily compromised.

In September 2021, Kristalina Georgieva, a Bulgarian economist serving as chair and managing director of the IMF, was accused of influencing a report in Beijing’s favor during her time at the World Bank.

According to numerous credible reports, Georgieva applied “undue pressure” on staff to boost China’s ranking in the bank’s “Doing Business” report, which ranks countries based on issues like regulatory and legal frameworks, financing measures, and quality of infrastructure.

Shortly after Georgieva was accused of essentially helping China deceive the world, her employer promised to replace the report with something more appropriate.

One wonders how Georgieva landed a job at the IMF, especially when the evidence implicating her in highly unethical activities appears to be so strong.

Is it because the IMF is inherently corrupt?

If the president of Mexico, Andrés Manuel López Obrador, is to be believed, then the answer is most definitely yes.

As bad as the IMF is, it’s nowhere near as bad as the World Bank, an institution that has been accused of ushering in a new age of “global apartheid,” which refers to minority rule in international decision-making.

Twenty years ago, the authors Salih Booker and William Minter gave the ultimate definition of “global apartheid.” Stated briefly, it’s “an international system of minority rule whose attributes include: differential access to basic human rights; wealth and power structured by race and place; structural racism, embedded in global economic processes, political institutions and cultural assumptions; and the international practice of double standards that assume inferior rights to be appropriate for certain ‘others,’ defined by location, origin, race or gender.”

Speaking of discrimination, let’s talk about China, a place where apartheid with Chinese characteristics is currently taking place. In Xinjiang, very much an apartheid state, innocent people are being persecuted. To be specific, genocide is taking place. Not “just” cultural genocide, as some authors would have us believe, but actual genocide. Ethnic cleansing. Exterminations on a scale not seen since Mao Zedong reigned supreme.

Hundreds of thousands have been shipped off to “reeducation” camps, a more polite way of saying death camps. For people who question the existence of Hell, look no further than Xinjiang. It is, by all accounts, one of the most hellish places on the planet.

According to a joint investigation carried out by the Helena Kennedy Centre for International Justice at Sheffield Hallam University in the UK and NomoGaia, a nonprofit dedicated to the preservation of human rights, the International Finance Corporation (IFC), a member of the World Bank Group headquartered in Washington, has contributed to the genocide occurring in Xinjiang.

According to the February report, significant evidence “suggests that several of IFC’s clients are active participants in the implementation of China’s campaign of repression against the Uyghurs, including through forced labor, forced displacement, cultural erasure, and environmental destruction.”

The IFC has repeatedly failed to “safeguard communities and the environment affected by its financing in the Uyghur Region.” This catastrophic failure makes the “institution complicit in the repression of Uyghur, Kazakh,” and other minority citizens, note the authors.

The report goes on to outline the many ways in which IFC financing is, to this day, “contributing to companies committing gross human rights abuses against Uyghur peoples in the region and making evidence-based recommendations to IFC and other parties.”

During a recent interview with Tucker Carlson, Peter Schweizer, author of “Red-Handed: How American Elites Get Rich Helping China Win,” talked about something called “elite capture,” a strategy whereby the CCP essentially loops in “American business titans with lucrative contracts or deals that get them to look the other way as Beijing rises globally.”

This type of capture also extends far beyond the United States. In fact, “elite capture” appears to be a global phenomenon.

Today, however, according to the aforementioned joint investigation, the World Bank has strayed far from its original goal. An institution that was designed for good has been corrupted beyond all recognition. Instead of helping the world heal, the World Bank is contributing to hurt, harm, and harassment in Xinjiang.