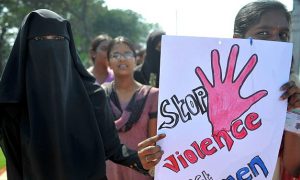 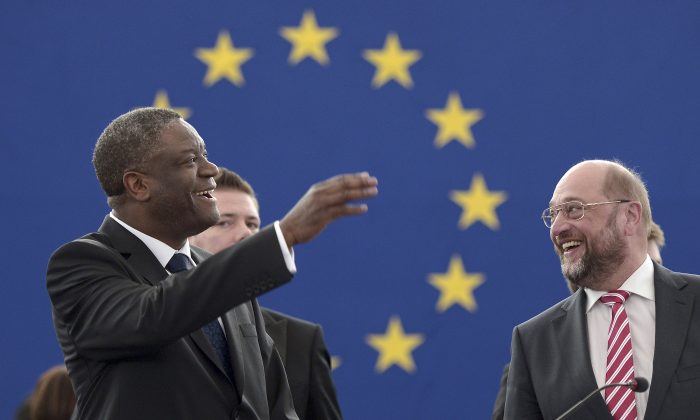 Congolese gynecologist, specialized in treating victims of rape and extreme sexual violence, Denis Mukwege (L), next to European Parliament President Martin Schulz after receiving the prestigious Sakharov human rights prize for his work in helping thousands of rape victims in the Democratic Republic of the Congo on Nov.26, 2014 at the European Parliament in Strasbourg, France. (Frederick Florin/AFP/Getty Images)
Europe

Dr. Denis Mukwege, 59, has repaired thousands of women, some more than once, who have been victims of rape by military and rebel groups in the Democratic Republic of the Congo.

He has learned which rape methods are used by different groups to leave their mark of intimidation.

More than sexual violence, objects and chemicals are also used to inflict damage in women and children as young as 6 months old.

For his work with rape victims and the advocacy he does, Mukwege was named African of the Year as well as nominated for the Nobel Peace Prize in 2009. Last month, he was given one of the most prestigious human rights awards, the Sakharov Prize for human rights, democracy, and freedom of thought by the European Parliament.

Mukwege, the son of a pastor, decided to go into medicine because he felt that praying for people wasn’t enough. After studying medicine he worked in a rural hospital where he saw that women were experiencing complications during childbirth because they had no access to gynecological services.

He went to France to study gynecology, planning to return and help with maternity care in rural DRC. The civil war that started in 1996 changed that, however.

Mukwege and some colleagues founded the Panzi hospital in Bukavu in eastern DRC after the hospital he was working in was destroyed in the war. His focus shifted from maternity care to rape when rape victims started filling more and more of the hospital beds at Panzi.

Although the civil war has officially ended, the eastern part of the country where Mukwege works remains embroiled in conflict, and rape is still an ongoing problem. The U.N. estimates there are 1,100 new cases of rape a month, leading one senior U.N. official to call it the “rape capital of the world.”

“The women’s body there became a battle ground and rape is used as an instrument of war. As a result, the family unit is fragmented, social fabric is destroyed, populations are reduced to slavery or exile, the economy is run by warlords and there is no rule of law,” said Mukwege in his acceptance speech for the Sakharov Prize.

Mukwege, who has a wife and five children, continues to speak out about the sexual abuse of women despite the constant threat to his life and family.

In 2012, four or five armed men stormed his residence while he was not home, took his daughters hostage, and waited for Mukwege to return to assassinate him. Upon his return, his guard intervened and was shot dead by the assassins, but Mukwege was able to escape.

He went to Belgium where he stayed as a refugee with his brother Emmanuel for a few months before returning to the DRC.

“We lived together in comfort and then he told me, ‘I cannot stay in Belgium. This would be betrayal toward those thousands of women.’ He said, ‘If I die, I will die together with those women,'” Emmanuel recalled.

He only does operations a few times a week now; most of his time is spent managing the hospital and traveling for his advocacy work.

“How can I fall silent when for 15 years we see what even the eyes of a surgeon can’t get used to?” he said.

Mukwege believes rape is a consequence of the fragile political structure that cannot restrain the warlords ravaging the country.

The government has little control over the marauding rebel forces that leave a trail of traumatized citizens in their wake, and even the government forces are not clean. The U.N. believes that almost a third of the rapes are by the government’s own poorly controlled military.

Rich in natural resources and the second largest country on the Africa continent, the wealth combined with the vast space and government corruption has made it a magnate for rebel groups from neighboring countries.

“Armed groups were responsible for just over half the rapes, mostly committed during attacks aimed at gaining control of territories rich in natural resources,” the U.N. said in a statement in April.

For Mukwege the Sakharov Prize was one steppingstone toward bringing international awareness and assistance to his country, steppingstones that have come too few and far between.

He has asked the international community to help arrest and bring to justice those who have committed egregious crimes in the DRC.

Just last week, the International Criminal Court in The Hague rejected the appeal of Congolese militia leader Thomas Lubanga charged with conscripting child soldiers to fight in his army. He will face 14 years in prison. While human rights groups hailed the court’s decision, they said it was it was only a drop in the bucket—many more perpetrators of heinous crimes still walk free.

When asked if he would become a politician and take his advocacy to the next level, he said simply, “I have worked in the operating room for over 10 years, I speak out because I cannot keep silent, I don’t need to be a politician to do that.”