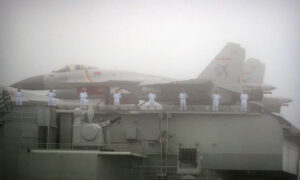 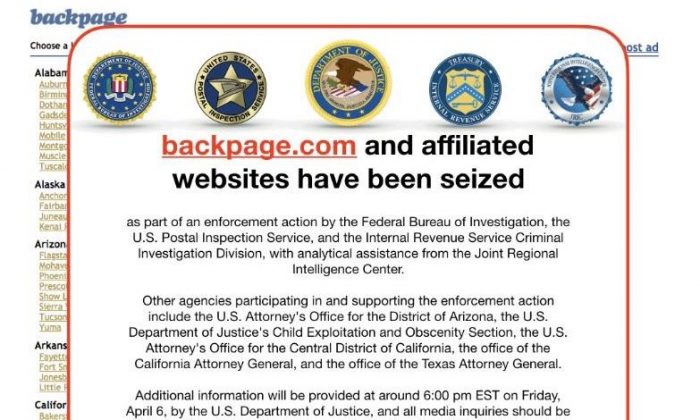 This screen grab image obtained April 9, 2018 shows backpage.com and affiliated websites that have been seized by the FBI in Washington,DC. (-/AFP/Getty Images)
Viewpoints

The Women’s March and Backpage.com: A Sordid Story

That’s about all there is to say in response to the official Women’s March Twitter page, which decried the federal government’s move to seize and shut down Backpage.com, a multibillion-dollar internet human trafficking platform.

Except that there is so much more to say, because there is so much wrong with an entity that purports to stand for women in its official capacity both promoting the legalization of prostitution and defending a company that is currently being prosecuted by the federal government for the trafficking of women and children.

In an Orwellian tweet, the Women’s March wrote: “The shutting down of #Backpage is an absolute crisis for sex workers who rely on the site to safely get in touch with clients. Sex workers rights are women’s rights. Follow@SafeSpacesDC @melissagira @swopusa @KateDAdamo @supporthosechi @anaorsomething for more info.”

First, let’s get the backstory on Backpage.

For years, some of the smartest lawyers in the country have been trying to nail the website. A yearslong Senate investigation found with absolute certainty that it wasn’t just running ads selling trafficked women and children, but was actively helping their pimps to skirt the law and hide from investigators. The title of the Senate report detailing the results of the investigation, “Backpage.com’s Knowing Facilitation of Online Sex Trafficking,” clearly didn’t mince words.

Even as Backpage employees helped pimps code their ads so that things like the age of a girl being sold for sex was obvious to the buyer but not to an investigator (or a terrified parent), the company hid for years behind outdated technology laws that granted blanket immunity to websites for any criminal activity. All that changed last month with the passage of the Fight Online Sex Trafficking Act (FOSTA), thanks to the brave and bipartisan leadership of Sen. Rob Portman (R-Ohio) and Sen. Richard Blumenthal (D-Conn.). The bill closed a legal loophole that had allowed Backpage to exist for as long as it did by criminalizing the knowing facilitation of online sex trafficking.

Almost immediately, the government seized the site and its founders were arrested and charged. For dirty, bad, dark stuff.

Unless you are the Women’s March.

The Women’s March could barely stoop any lower after it blocked pro-life feminist groups from official involvement in the 2017 event and tweeted that their presence wasn’t welcome. And there was the March’s public spat with gender ideologues about whether or not the group’s crass choice of female genitalia as their official emblem was intolerant because it wasn’t inclusive of biological males who self-identify as women. But now, the Women’s March is officially endorsing prostitution and defending the enablers of human trafficking.

That’s a pretty horrible low. And it betrays the extremism of the movement’s organizers, who have essentially signaled to the nation that they are more welcoming of criminal pimps than they are of approximately half of American women who self-identify as pro-life. Or, as one reporter at the Washington Free Beacon put it, “the Women’s March is officially more accepting of prostitution and sex trafficking than it is pro-life women.”

But the Orwellian cherry on top was the fact that the Women’s March re-tweeted something called Collective Action for Safe Spaces, whose Twitter handle is @SafeSpacesDC. Backpage was many things, but safe it was not. Something tells me the mother of 16-year-old Desiree Robinson, who was sold into sex on Backpage for $250 and then killed and dumped in a garage on Christmas Eve, would agree. Or the family of Ashley Benson, who was bought on Backpage and then strangled by her buyer after an argument about money. Or the mother of Alexus Garcia, whose body was burnt after the man who bought her on Backpage killed her and tried to cover up his crime.

As Backpage is dismantled and the criminals who ran it are taken down one by one, more and more of these horror stories will come to light. Backpage was an online house of horrors. And in trying to legitimize what went on there, all the Women’s March does is march its own movement to its death.

Ashley McGuire is a senior fellow with The Catholic Association and the author of “Sex Scandal: The Drive to Abolish Male and Female.” This article was originally published on RealClearPolitics.