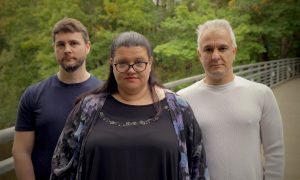 “Now we have the attempt to apply Leninism to the American context, using corporations as part of the toolset, for example. And so we call this movement the ‘woke’ movement. We talked about woke capital with all the corporations … the woke movement is Leninism 4.0,” Lindsay told Jan Jekielek, host of The Epoch Times’ American Thoughts Leaders program on Jan. 13.

Lindsay explained that the first 3 versions or flavors of Leninism through Lenin, Stalin, and Mao, each tried to fix the problems from the previous version.

The “woke” movement that has evolved today focuses on the issues of social and racial justice and has become a catchword used by Black Lives Matter activists on the streets.

Lindsay described the movement as “the idea is that you have some enlightened party of people who are probably part of what Marx would have identified as the bourgeoisie, who understand the problem of the proletariat better than the proletariat does and is going to shepherd them through the revolution that they need to have that’s for the greater good or in their best interest.”

For people on the left, being “woke” means siding with social justice advocates focused on contemporary political concerns, but for people on the right, it is often interpreted as an aspect of “political correctness” or “cancel culture.”

Lindsay said he’s been studying “woke” culture and its historical and philosophical antecedents for a number of years.

“At present, what’s happening in the United States [is] we have ‘repressive tolerance’ at the end of a narrative, which is a significant difference [of] 4.0 versus 1.0. So we should point that out, at least for the moment, that the way that they are, you know, Lenin went around and killed dissidents, they are instead canceling dissidents here,” he said.

But he noted that there are some encouraging positive developments.

Lindsay said the people who broke into the Capitol building on Jan. 6 might have had the “intention of some kind of insurrection,” but that video footage showed that they were “wandering around being interviewed by journalists” and didn’t have a plan of action. He doesn’t think President Donald Trump incited violence there and that the narrative that he did doesn’t add up.

Lindsay also called out hypocrisy from the left as they try to get “sharp prison sentences threatened on these people [who broke into the Capitol]” and make them unemployable, even calling on Sens. Ted Cruz (R-Texas) and Josh Hawley (R-Mo.) to be removed from their offices.

“You see Cori Bush calling for them to be removed and then we compare that to what we saw with Kamala Harris saying: here’s the link to bail people out of jail for the riots in June. We see AOC saying repeatedly that the riots are necessary,” he said.

Lindsay offered advice to people who may feel confused about the current rapidly-changing narratives surrounding politics: “take a bit of a step back from the news.”

Lindsay, author of six books on subjects ranging from religion, the philosophy of science, and postmodern theory, said he’s not a Trump fan or right-wing, but strives to uphold liberty.

This article was corrected to explicitly state that the “woke” ideology and movement is embraced by Black Lives Matter organizations, not the totality of individuals who accept or advocate for the truism that “black lives matter.” This was ambiguous in a previous version of the piece.